Presidential hopefuls Trump and Clinton don’t agree on much. But they – along with Russia’s Putin and Turkey’s Erdoğan – are united in their resolve to destroy ISIS.

The terrorist network has killed at least 20,000 people in the last five years.

[ad#Google Adsense 336×280-IA]Plus, at least 1,200 civilians were killed in terrorist attacks outside of Iraq and Syria.

But even the world’s biggest governments can’t defeat ISIS alone. As the conflict in Syria and Iraq has dragged on, technology has played an increasing role.

And now that the private tech sector has joined in the war against ISIS, investors can actually profit from this noble effort.

Below, we’ll examine three established companies working to bring this humanitarian tragedy to a close.

The world’s largest defense contractor is the most obvious play here. There are few more direct ways to invest in destroying ISIS than through Lockheed Martin (NYSE: LMT).

A large part of Lockheed’s business comes from the production and sale of munitions to the U.S. government. It builds the hellfire missiles used in American airstrikes against ISIS. And the Department of Defense gave Lockheed $18 million in February to increase output. 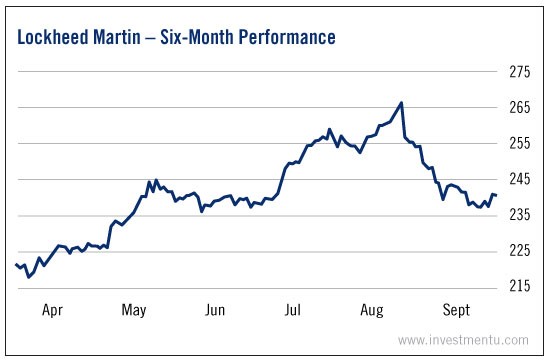 Lockheed shareholders have done well in the last six months. They’ve gotten returns near 10%. (Though, as you can see, shares did sell off recently.) By joining Lockheed’s ranks, you’re helping fund the hardware being used on the frontlines against ISIS.

Part of the reason why ISIS is so pervasive is its online recruitment efforts. It has gotten thousands of its own fighters killed… yet it can easily recruit more through its various social media channels.

Fortunately, large social media companies are committed to ending these radicalization campaigns. And Twitter (NYSE: TWTR) is leading the pack.

The social giant has deleted hundreds of thousands of ISIS-affiliated accounts in the last year. And it operates several counter-terrorism teams which specialize in muting and discrediting violent rhetoric. 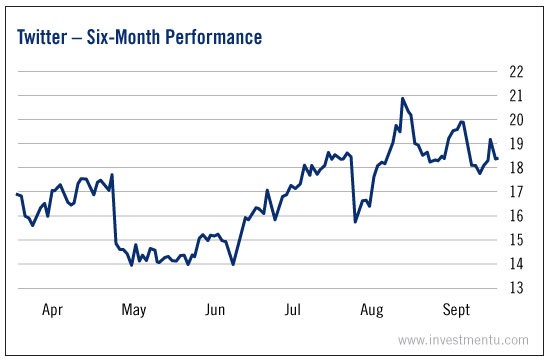 The company formerly known as Google has undergone prolific expansion in recent years. Alphabet (Nasdaq: GOOG) divisions are working on a vast array of problems in modern society.

One of the most interesting subsidiaries is Jigsaw. Originally titled “Google Ideas,” Jigsaw is a technology think tank. Right now, it’s working on an innovative counter-radicalization program. This is based on its parent company’s core technology.

Jigsaw’s “Redirect Method” monitors search patterns to identify people who are warming to ISIS’s recruitment propaganda. Then, it serves them display ads which redirect them to videos of reformed ex-jihadis. These defectors can then appeal personally to would-be militants.

In other words, they can convince them that joining ISIS isn’t worth it.

The program is still in its infancy. But if successful, it could prove to be one of the most valuable tools in destroying ISIS’ online presence.

And Alphabet investors are helping to power it.

Alphabet has earned its reputation as a high-priced blue chip. So if you can afford it, this is one of the safest long-term bets against global terrorism and extremism.

The fight to destroy ISIS has dragged on for five years now. It has cost thousands of lives. And it has contributed to one of the largest refugee crises in human history.

As an investor, these three companies give you an opportunity to put your money to good use – and snag some gains along the way.