You’re unlikely to find a bigger fan of dividend growth investing than me.

After all, it’s really been my salvation.

I was below broke back in early 2010. That’s right, I was worth a negative amount of money.

While it was really humbling to take a look at my net worth back then, I also realized I had a huge opportunity in front of me.

[ad#Google Adsense 336×280-IA]I could turn things around by growing up, getting serious, making some serious lifestyle changes, living below my means, and investing my savings into great businesses that pay me growing dividends.

That’s because you have the quality on one hand when you’re dealing with blue-chip companies that sell products and/or services that are demanded by consumers, other businesses, and/or governments all over the world.

And you have the growing dividends on the other hand that not only serve as “proof in the profit pudding” but also a great source of passive income that could one day buy me my freedom.

The six-figure portfolio I’ve built that’s chock-full of high-quality dividend growth stocks should spit out $11,000 or so in dividend income over the next year, which is enough to cover a significant portion of my core personal expenses.

It’s really quite imperative that you’re sticking to great businesses at great prices.

While a great business might not be terribly difficult to spot, a great price is a bit more nuanced.

First, what is a “great price”?

I’d submit that a great price is one that’s as far below fair value as possible.

Said another way, one should be looking to buy high-quality dividend growth stocks that are undervalued.

An undervalued stock is a stock that’s priced less than its intrinsic worth.

Undervalued dividend growth stocks are highly desirable for a number of reasons.

First, your yield is almost always going to be higher.

That’s because price and yield are inversely correlated.

All else equal, a lower price will equal a higher yield.

Total return is composed of both dividends and capital gain.

Well, both sides of the coin are positively impacted when paying less.

You’ve already seen how it goes with yield.

Capital gain, however, is also given a nice boost by virtue of the upside that exists between the lower price paid and the higher value of the stock.

While price and yield can diverge quite a bit over the short term, they tend to converge over the long run.

Third, your risk is lowered.

Is it riskier to pay more or less for something?

You should always aim to pay less, whether we’re talking about stocks or socks.

While this all makes a lot of sense, one first needs to know what a stock is worth before determining whether the price makes sense or not.

Once you know what a stock is worth, you’re in control. You’re able to make a stand and seek out only those high-quality dividend growth stocks that appear to be undervalued.

Williams-Sonoma is known for quality.

Just look at some of these brands: Pottery Barn, West Elm, and the namesake Williams-Sonoma.

The company sells a wide variety of home products and furnishings.

While these could be thought of as commodities in some respects, many consumers are willing to pay up for quality and design. That’s where Williams-Sonoma flourishes.

And while a major threat to longstanding retailers is the rise of e-commerce, Williams-Sonoma has taken the bull by the horns and led the charge: ~50% of the company’s revenue comes from e-commerce sales.

This has translated into a lot of profit.

Fortunately for shareholders, the company has been busy returning plenty of that profit to the very owners (shareholders) of the company via growing dividends.

Not the longest streak around; however, Williams-Sonoma has been making up for that by increasing its dividend rather aggressively: the five-year dividend growth rate is 20.2%.

The dividend raises have slowed a bit recently, due in part to the fact that the company started out with such a low payout ratio 10 years ago; underlying profit growth, meanwhile, has also slowed of late.

However, the payout ratio is only 44.3% currently, so there’s still plenty of room for more dividend raises.

Perhaps what’s best of all about the dividend right now is the yield.

In this low rate environment, that kind of income is hard to come by.

Furthermore, that yield is also significantly higher than the stock’s own five-year average yield of 2%.

So there’s a lot to like about the dividend.

You’ve got sustainability, growth, and yield.

But in order to determine what kind of dividend growth to expect moving forward, we’ll want to first have an idea of what kind of underlying profit growth the company should be able to generate.

And in order to formulate a future expectation, it makes sense to see what the company has already done over a long period of time. We’ll then compare that to a near-term forecast for profit growth.

All of this will help us later value the stock.

Rather significant share repurchases helped fuel much of that excess bottom-line growth, with the company reducing its outstanding share count by more than 20%.

Looking forward, S&P Capital IQ believes Williams-Sonoma will be able to compound its EPS by an annual rate of 10% over the next three years.

I believe that would be a hard target to reach. But even a historical growth rate of 7% would be pretty solid, especially when combining that with the current yield.

[ad#Google Adsense 336×280-IA]The rest of the company’s fundamentals are just as high quality, if not more so.

For instance, take the balance sheet.

The company has no long-term debt.

Retailing isn’t my favorite industry. Razor-thin margins, the threat of e-commerce, brutal competition, and difficulties differentiating a business are all concerns.

However, Williams-Sonoma bucks a lot of these trends.

Profitability is strong. Their e-commerce sales are brisk and growing. And they’ve been able to differentiate themselves in the mind of the consumer through design and quality.

But all of this is for naught if the stock isn’t undervalued.

So is it undervalued right now?

The P/E ratio is sitting at 15.04, which is substantially below both the broader market and the stock’s own five-year average P/E ratio of 20.8. There’s a serious discount at play here. Every other basic metric is below its respective recent historical average, while the yield, as mentioned earlier, is notably higher than it’s been, on average, over the last five years.

Wow. The stock definitely seems cheap right now. But how cheap? What’s a good estimate of its fair value?

My analysis concludes that the stock is at least moderately undervalued – and that’s after using what’s arguably a conservative valuation model. But what do some pros think about this stock and its value?

Morningstar rates WSM as a 5-star stock, with a fair value estimate of $73.00.

I came in the lowest, likely due to that conservative take. But I like to average these three valuations out so as to improve the potential accuracy by blending multiple methodologies together. That averaged valuation is $60.36, which indicates the stock is potentially 19% undervalued right now. 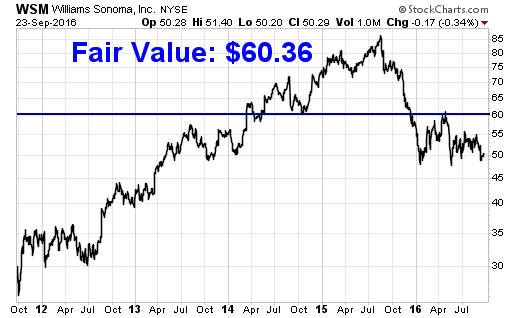 Bottom line: Williams-Sonoma, Inc. (WSM) has done a terrific job growing the company, profit, and the dividend. They’ve jumped out in front of the e-commerce train, and that should be commended. Instead, the stock has dropped about 35% over the last year, leading to what looks like 19% upside, on top of a yield that’s well above its recent historical norm. This is a really compelling opportunity that deserves a strong look from dividend growth investors.