By living well below my means and investing my excess capital into high-quality dividend growth stocks when they were attractively priced, I’ve been able to build up a six-figure portfolio that spits out enough growing dividend income to almost cover all of my core personal expenses.

[ad#Google Adsense 336×280-IA]The high-quality dividend growth stocks I invest in are stocks that have lengthy track records of growing their sales, profit, and, perhaps most importantly, dividends.

These growing dividends serve as not only a “litmus test” of growing profit (can’t write bigger checks every year if you don’t have the cash) but also a great source of growing passive income that one can live off of.

That’s why I put my money where my mouth is by sticking to investing almost exclusively in stocks that can be found on David Fish’s Dividend Champions, Contenders, and Challengers list.

As great as dividend growth stocks can be, though, one doesn’t want to pick any random stock off of that list and buy it at any price.

First, one wants to make sure they’re buying a high-quality business that appears to have a bright future over the next few decades.

Although a lot of stocks on Mr. Fish’s list certainly pass muster for me, there are also plenty of companies that have seen better days.

Just as importantly, however, one wants to pay a good price for their equity.

See, the price you pay for stock will have an immediate and lasting impact on your investment over the long run.

Just like you wouldn’t pay any price for any other good or service in your life, you should be mindful of the price you’re paying for dividend growth stocks.

The price you pay at the time of your investment will impact your yield, long-term total return prospects, and risk.

It’s easy to understand how and why.

All else equal, price and yield are inversely correlated.

That means a lower price will almost always equate to a higher yield on a stock.

The higher the yield, the more income you receive both now and, potentially, for the life of the investment.

And this positively impacts your long-term total return, since yield is a major component of total return.

Meanwhile, the other component, capital gain, is also positively impacted by the upside that exists between a stock’s price and value.

If a stock is deemed to be worth $50 but you pay $40, there’s $10 of potential upside that exists. And that’s, of course, on top of any normal long-term upside that exists by way of the company growing and becoming more valuable.

Plus, you’re risking less when you pay less.

You garner yourself a margin of safety when you pay less than a stock is worth.

Using that earlier example, that $10 of upside also serves as a $10 margin of safety, whereby the company could see its value permanently destroyed by $10 per share (via corporate malfeasance, new competition, or some other major issue) before you’d start to become concerned about being upside down on the investment.

Or you could just spend less money on an absolute basis and buy the same number of shares for less money, at which point you’re risking less money overall.

No matter how you really look at it, your risk is reduced when you buy a high-quality dividend growth stock when it’s undervalued (relative to what it would be priced at at fair value).

And all of these great benefits aren’t terribly difficult to attain – one just needs to have a good idea of what a stock is worth before they buy it.

One great system that’s designed to do just that – estimate a dividend growth stock’s fair value – is Dave Van Knapp’s lesson on valuation, which is part of his larger series of lessons on dividend growth investing.

A system like this makes it fairly easy to concentrate on dividend growth stocks that are undervalued, thus ruling out a lot of those expensive stocks out there that turn all of those advantages mentioned above into disadvantages.

But I won’t just leave you there.

I’m going to discuss a high-quality dividend growth stock that right now appears to be undervalued, offering a higher yield, greater long-term total return prospects, and less risk than it ordinarily does (when it’s fairly valued).

Founded in 1850, American Express was originally an express mail service. Over the years, it has slowly transformed into a financial products and services company, where it now focuses on its branded charge and credit card products.

This was a prescient move, with the business model that American Express now focuses on being a very lucrative one.

And since there’s a huge network that must be built out in order to facilitate these transactions, those companies, like American Express, that own those networks have an economic moat that is very difficult to penetrate.

But all of this is for not, in my view, if the company isn’t growing its profit and sharing that growing profit with shareholders in the form of a growing dividend.

American Express has increased its dividend for five consecutive years now, a streak that would be more impressive had the company not kept its dividend static during the financial crisis.

However, they’re making up for lost ground with a fairly strong five-year dividend growth rate of 8.8%.

Better yet, the dividend growth is accelerating: the most recent dividend increase was over 10%.

And with a payout ratio of just 22.5% (one of the lowest among stocks I cover), there’s plenty of room for big dividend increases for many years to come.

That’s good news, since the yield is only 1.97%. We want to see plenty of dividend growth with a low-ish yield.

Keep in mind, though, that this yield is very competitive in this industry. Moreover, it’s almost 70 basis points higher than the stock’s own five-year average yield of 1.3%.

So this has moved from a stock with a very low yield to one that offers a more moderate yield, along with dividend growth that’s also accelerating.

Higher yield and more dividend growth? We could have both here.

But much of the long-term future dividend growth will be predicated upon the underlying growth the firm generates. And in order to have a good idea as to what to expect, we’ll first take a look at what American Express has generated in terms of both top-line and bottom-line growth over the last decade, then compare that to a near-term forecast for profit growth.

I’d prefer to see something a bit more robust there in terms of sales growth, but this really isn’t terrible. The financial crisis saw American Express’s sales take a pretty strong dip in FY 2009, but has grown rather strongly since.

Meanwhile, due to a combination of margin expansion and rather significant share repurchases, earnings per share climbed from $2.99 to $5.05 over this period, which is a CAGR of 6.0%.

Looking forward, S&P Capital IQ believes that American Express will compound its EPS at an annual rate of 5% over the next three years, which is really right in line with we see over the last 10.

As such, American Express is focusing on cutting costs, repurchasing shares, and investing in its network and clients. Management believes this is short-term pain for long-term gain.

The balance sheet is moderately leveraged, with a long-term debt/equity ratio of 2.32 and an interest coverage ratio of just under 14.

Profitability, meanwhile, is fairly strong, with the company averaging net interest margin of 5.66%, return on assets of 3.34%, and return on equity of 26.61% over the last five years.

The company’s ability to scale is incredible, since more transactions generally don’t require more investment from the company.

And since they’re collecting a percentage of every transaction that comes across their network, inflation protection is practically built right in.

Moreover, the business isn’t capital intensive at all: capital expenditures consume very little of the company’s operating cash flow, meaning plenty of cash can be returned to shareholders in the form of dividends and buybacks.

Perhaps this is why Warren Buffett is such a fan of the company: American Express is one of the largest positions in Berkshire Hathaway Inc.’s (BRK.B) public stock portfolio.

That all said, American Express is seeing increased competition from larger global players like Visa Inc. (V). And the loss of a major contract with Costco Wholesale Corporation (COST) was a huge blow.

To counter, American Express adding more worldwide merchants, ramping up spending on member acquisition, and attempting to reduce its overall cost base by $1 billion by the end of 2017.

With all of this in mind, I do believe the stock’s valuation is nonetheless very compelling right now.

The stock’s P/E ratio is sitting at 11.44 right now, which is less than half the broader market. That’s also substantially below the stock’s own five-year average of 15.2. That valuation is in line with a lot of major banks. And while American Express has some lending risk through its credit card portfolio, this valuation is also practically discounting all of the fast-growing charge network business. And as mentioned earlier, the current yield is much higher than its own recent historical average.

So the stock does look quite cheap here. But how cheap? What’s an estimate of the stock’s intrinsic value?

I valued shares using a dividend discount model analysis. I assumed a 10% discount rate and a long-term dividend growth rate of 8%. With the extremely low payout ratio, the company has the wherewithal to continue growing the dividend rather aggressively while they simultaneously get the business back on track. The DDM analysis gives me a fair value of $69.12.

In my view, this stock is at least moderately undervalued. The dividend growth rate input in my analysis is arguably conservative, yet the stock still looks cheap. But how does my view compare to that of professional analysts that have taken the time to analyze and value the stock?

Morningstar rates AXP as a 4-star stock, with a fair value estimate of $76.00.

Looks like I came in quite conservative here. Again, I was arguably being conservative. However, I like to average out these three valuations precisely because of that – one piece of data input that’s even just slightly off can have a large impact on the valuation, which means averaging out different perspectives should concentrate the accuracy. That averaged valuation is $74.24, which indicates the stock is potentially 14% undervalued right now. 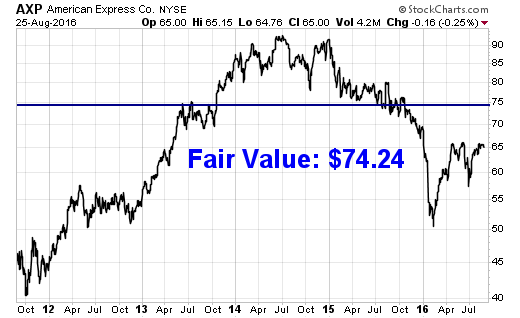 Bottom line: American Express Company (AXP) is a high-quality firm that is perfectly positioned to hand out plenty of dividend raises for years to come. Although they’ve had some stumbles of late, the valuation seems to price a lot of that in, with the possibility of 14% upside on top of a yield that’s much higher than its recent historical average. I recently initiated a position in the company due to the unique combination of quality and value in this market. I recommend long-term dividend growth investors take a good look at this stock here.