They invest in things they don’t understand.

These are just a few examples, but the list stretches on beyond what I could reasonably cover today.

[ad#Google Adsense 336×280-IA]What’s really unfortunate about this is that it’s not difficult at all to successfully invest money and become very wealthy over the course of one’s life.

In fact, the irony here is that it’s probably easier to intelligently invest than it is to totally screw up.

I can tell you that I spend very little time investing; I simply let the collection of 105 businesses that I’ve built equity in go out and make money for me, and then share that profit with me in the form of growing dividends.

Primarily, one should be looking at quality and valuation when it comes time to buy stocks.

Now, I focus on dividend growth stocks, as you can see by looking at my portfolio.

That means I invest in companies that have lengthy track records of not only paying dividends but also increasing the amount of those dividend payments year in and year out.

So check this out…

You’ll find almost 800 US-listed stocks that have increased their dividends for at least the last five consecutive years by checking out David Fish’s Dividend Champions, Contenders, and Challengers list, which is the most robust and complete list of dividend growth stocks that I’m aware of.

However, one shouldn’t just randomly pick stocks off of that list to buy.

Quality is of extreme importance.

That means you should be analyzing a company’s fundamentals – you want to look at growth rates, the balance sheet, profitability, etc.

But perhaps just as important is the price you pay at the time of investment.

No, price simply tells you what you’re paying.

But value is what you’re receiving in exchange for your money.

Value gives context to price. Without knowing value, you cannot possibly know whether or not the price is appropriate.

And that’s why it’s so important to value a stock before you buy it.

A great system designed to accomplish just that can be found right here on the site.

Put together by fellow contributor Dave Van Knapp, it’s a specific lesson on valuation that’s part of his overarching series of lessons on dividend growth investing in general.

The price you pay for a dividend growth stock affects your yield, long-term total return prospects, and risk.

The lower the price, the more advantageous all of these aspects should be.

For one, price and yield are inversely correlated.

All else equal, yield is always higher when the price is lower.

So an undervalued stock, compared to what it would be priced at if it were fairly valued, should just about always come attached with a higher yield, meaning more current and ongoing income.

This higher yield not only impacts your current and ongoing income but also your long-term total return prospects, since yield is one of two major components to total return (the other being capital gain).

In addition, your potential total return is given a boost by virtue of the upside that exists between the price you paid and fair value.

That’s additional possible capital gain on top of any long-term gain that manifests itself as the company becomes worth more over time.

And the risk is obviously lower here since you’re simply spending less money per share. That gives you some wiggle room, known as a margin of safety.

This is all well and good, but what does potential undervaluation look like in real-time?

CVS is one of the major players in its space, as it filled approximately 1 billion prescriptions in 2015. That’s more than 20% of the domestic market.

That dominance puts it in a great position as demographic trends – there are over 75 million baby boomers – fill its sails with long-term tailwinds.

The pharmacy business model has been around for about as long as businesses have been around, and I see no reason why that won’t continue.

If anything, this business model should only become more strong over time, considering the world (and the US) is getting older, larger, and wealthier.

As people grow older, the need for access to high-quality medication grows. And medication typically isn’t something you can do without – it’s usually not a discretionary purchase.

All of this has combined to put a lot of money into the pockets of CVS shareholders, with the company sporting 13 consecutive years of dividend increases.

Over the last decade alone, CVS has grown its dividend at a compound annual rate of 25.4%.

That’s an eye-popping number, no doubt about it.

It’s especially impressive when comparing that growth to the rate of inflation over the last ten years.

Suffice to say, shareholders have seen a major increase in purchasing power over that time frame.

And with a payout ratio of only 36.9%, there’s still plenty of room for CVS to hand out many, many more dividend increases for years to come.

The only real drawback to the dividend metrics I can see is the yield.

At 1.76%, there’s something to be desired there for investors that are in need of more current income.

Of course, CVS, in my opinion, more than makes up for that with the dividend growth. And it’s important to also be mindful of the fact that the five-year average yield for the stock is only 1.3%, meaning the current yield is more than 40 basis points higher than its recent historical average.

But the lack of a much higher yield is definitely a drawback for older investors that may be looking to live off of dividends in the near term.

With a low payout ratio and an extremely high growth rate, we might expect that CVS either started out with a very low payout ratio at the beginning of this period or is growing its underlying profit at an outstanding rate.

Well, it’s a little bit of both.

The payout ratio was only about 10% a decade ago.

However, the bigger story is really the top-line and bottom-line growth over this time frame.

This kind of growth is certainly impressive in absolute terms. But I believe its even more impressive in relative terms, considering the company was starting out with a base of more than $40 billion.

So we’re looking at double-digit growth across the board. Strong stuff here.

Revenue over this period was given a big boost by the 2007 acquisition of Caremark Rx, which transformed CVS from simply a retailer to a major PBM. But this was an all-stock deal, leading to dilution, which impacted EPS growth.

Nonetheless, S&P Capital IQ believes that CVS will be able to compound its EPS at a 14% annual rate over the next three years, which would be within spitting distance of what the company accomplished over the last decade.

A more recent acquisition of Target Corporation’s (TGT) pharmacies is believed to be very accretive, further transforming the company.

The growth – both past and what is still likely yet to come – is pretty impressive.

And the rest of the fundamentals are, too.

These numbers compare very favorably to competitors. Keep in mind, too, that CVS is a major retailer, hence the margins.

The balance sheet is also fairly strong, with a long-term debt/equity ratio of 0.71 and an interest coverage ratio over 11.

The company has also been paying down as of late.

All in all, I think there’s a lot to like about this business.

And it is well insulated against the rising threat of e-commerce thanks to its position as a dominant PBM. This bolsters their potential success as a general retailer, too.

CVS just recently reported Q2 results. Revenue was up almost 18% year over year. And the high end of guidance for FY 2016 EPS was increased almost 8%, to $5.39.

The stock zoomed up approximately 5% after these results were announced. For the record, I started writing this article before Q2’s report came out, though I still think there’s a lot of value here.

With all of this in mind, the stock should be priced at a premium. But it isn’t, even after the recent pop.

The P/E ratio is sitting at 22.20 right now. That’s below the broader market, even though the company is growing well into the double digits. In addition, recent guidance shows an acceleration off of recent expectations. And the current yield is also well above its recent historical average, as noted earlier.

That doesn’t seem expensive at all for the quality and growth. What, then, would a fair price be?

I valued shares using a two-stage dividend discount model analysis, to account for the low yield. I factored in a 10% discount rate, a 15% dividend growth rate for the first 10 years, and a terminal dividend growth rate of 7%. The most recent increase was over 20%. And the payout ratio is still very low, while the company is still growing rather aggressively. The DDM analysis gives me a fair value of $116.46.

My analysis indicates the stock is undervalued by a good margin here. But what do some professional analysts that track and value the stock think about it?

Averaging these three valuations out gives us $115.29, which means we could have a stock on our hands that’s 20% undervalued. 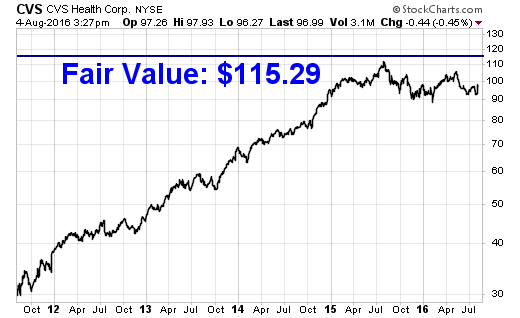 Bottom line: CVS Health Corp. (CVS) is a major pharmacy benefit manager, with a massive footprint of almost 10,000 stores. Huge demographic tailwinds work in its favor, and recent results show the company is doing even better than expected. Yet the stock is down more than 13% over the last year, putting it at a price point that indicates 20% upside. On top of that, the yield is much higher than its recent historical average. Dividend growth investors should be taking a good look at this stock.