The global economy is about to be dealt one “double whammy” of a knockout blow.

It’s because of two different emerging trends that are fast approaching collision: financial repression and the uncontrolled expansion of the financial sector.

Financial repression has vastly contributed to the pain the middle class is feeling now.

[ad#Google Adsense 336×280-IA]Historically low, even negative, interest rates have eaten into returns and helped decimate pension funds and punish everyone from savers to bondholders.

At the same time, massive banks have been allowed to grow in size and power, totally unchecked.

And they’ve used this growth period to inject huge, totally unsustainable amounts of leverage into the system via trillions of dollars in derivatives contracts and bad loans.

Either of these would be bad enough, but I want to show you how these trends are converging to unleash a firestorm of capital destruction on the unwitting. That’s something we’re just beginning to see in Europe right now, but it sure won’t stop “over there.”

The way to avoid it? Don’t be unwitting. Take a look at this easy-to-trade profit play I’m recommending right now.

The worse banks get, the more it pays…

A recent Bank of America Merrill Lynch report says that since the global financial crisis, relentless interest rate cuts, coupled with unrestricted asset buying by the central banks, have pushed interest rates to their lowest level… in 5,000 years.

You read that right: five thousand years, going back to the Bronze Age and the dawn of money itself. It’s never been as cheap as it is right now, in 2016. 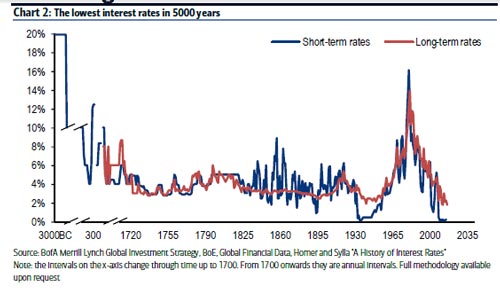 The free market in interest rates – in money – has been essentially destroyed, just one casualty of central banks’ “War on Deflation.”

How can anyone, aside from the central bankers who ought to know better, believe this won’t turn out a disaster?

This brings us to the next historic catastrophe, or should I say “link in the chain”…

Worldwide, over $13 trillion in government bonds trade at valuations that imply negative rates; bondholders now get less than their original capital back at maturity.

That equates to over a third of all government obligations.

In Japan, at least 90% of government bonds now yield 0% or less.

The phenomenon has become so widespread that today half a billion people participating in 25% of the global economy are stuck with negative rates.

This is bad for everyone, but it’s pushing banks in particular to the brink. They’re having a tougher go than ever at turning profits in this ultra-low rate environment, especially in Europe…

Thanks to financial repression and bad lending practices, fully 18% of Italian bank loans fall into the “nonperforming” category. Those are loans where the debtor hasn’t made scheduled payments for at least 90 days.

Bad loans in Italy are currently more than triple the levels seen in the United States… at the height of the financial crisis.

Italy’s government wants the European Central Bank to bail out its banks. But new “bail in” rules mean shareholders and creditors should be on the hook first, before the government resorts to tapping taxpayer funds.

European courts do provide for an “out,” whereby a government bailout can be implemented instead if the European Commission determines there’s sufficient risk to “financial stability.”

Which just might happen, since Mario Draghi, president of the European Central Bank, indicated he’d be in favor of such a bailout.

Now, according to the Financial Times, Italy’s finance minister has just denied that his country’s banks are suffering from systemic problems and rejected a “bail-in” at the expense of private investors.

That suggests to me that the odds of such a bail-in are greater than ever. You see, when a rumor is officially denied, it has a funny way of becoming precisely the course of action taken.

In any case, European bank shares have already been hard hit, with many down 70% or more. Two of Italy’s biggest banks alone are down 80% in the past 12 months.

How to Profit When This Crisis Hits Home

Shrinking interest margins and a slow lending business have been the biggest culprits. Bank profits depend to a large extent on the “spread” they earn between interest paid to depositors and interest charged on loans.

With Fed rate hikes looking scarcer by the month, margins are likely to stay “lower for much longer than anyone even fathomed,” according to Troy Gayeski, partner and senior portfolio manager at SkyBridge Capital.

Despite challenges of the present and ugly prospects on the horizon, American banks have held up better than their European counterparts.

Over the past year, U.S. financials are down about 7% versus European banks that have dropped 33%.

But as the market realizes the Fed’s essentially powerless to meaningfully raise rates, U.S. financials will have their turn in the doghouse.

So here’s how you can play that inevitable outcome.

Consider buying long-dated put options to benefit from lower bank share prices. That way you get more time for this scenario to play out, even as you risk less capital for a bigger potential payoff.

My favorites are put options on the Financial Select Sector SPDR ETF (NYSE Arca: XLF). The XLF January 2018 $22 puts are the richest and most liquid right now, with open interest sitting above 16,000 contracts. That’s the home of the smart money on this play.

For just a few hundred dollars, you could get a major payoff when U.S. banks follow their European counterparts and implode under the weight of ever lower interest rates, casualties of the War on Deflation.