With the S&P 500 just a few points off of its all-time high, I believe it’s more important than ever to remain cognizant of stock valuations and whether or not the price you’re paying for a stock is appropriate.

Of course, this is something to be vigilant about at all times.

But it’s just that much more important when the prices across the board continue to elevate, perhaps well past fair values for many stocks.

[ad#Google Adsense 336×280-IA]By the way, what is that? What is fair value? And why does the price we pay for stocks matter?

This may be something that people lose in the daily noise of the market, but stocks simply represent ownership stakes in real businesses.

So when you buy a stock, you’re buying a portion of a business.

That means all the cash flow, assets, debt, patents, and everything else that business lays claim to is also yours, just on a (much) smaller scale.

As such, there’s a value for all of that.

It’s just like if you were to go out and buy a business outright.

You wouldn’t pay any price for a whole business, right?

Well, the same goes for stocks.

The price you pay for a stock impacts your yield, long-term total return, and risk.

And the less you pay, the more advantageous all of these will be.

That’s exactly why one should keep an eye out for undervalued stocks.

You can see that by looking at my real-life, real-money portfolio, which has more than 100 different dividend growth stocks in it.

I’m a huge fan of the dividend growth investing strategy because I’m typically investing in great businesses that are routinely and increasingly profitable enough to send me an increasing share of that profit (by way of an increasing dividend).

These track records are quantifiable, as is the cash flow.

And you can see what longstanding dividend growth track records look like by checking out David Fish’s Dividend Champions, Contenders, and Challengers list, which has compiled information on almost 800 US-listed stocks with at least five consecutive years of dividend increases.

But as much as I love buying these stocks, I’m not interested in paying any price.

As noted earlier, the price you pay has long-term effects.

First, a stock’s yield is higher when its price is lower.

All else equal, price and yield are always inversely correlated.

So a cheaper stock will almost always come with a higher yield, relative to the yield that would be available if the price was higher.

Second, the long-term total return prospects should be greater for a dividend growth stock that’s undervalued.

Again, this is relative to what would be expected at a higher price.

Total return for most stocks is comprised simply of yield and capital gain. The higher you can get both, the higher your total return will be over the long run.

Well, we can already see how yield is positively impacted.

But long-term capital gain is also positively impacted via the upside that exists between the price paid and the fair value of a stock, when bought well below fair value.

If a stock is worth $50 but purchased at $30, that’s $20 worth of upside (per share) that exists over the long run, on top of any normal appreciation that would naturally occur by virtue of the business becoming more valuable as it earns more money.

Third, the risk should be lower.

This one is obvious. If you’re paying $30 rather than $50, you’re risking $20 less per share. That allows you to acquire the same number of shares for less absolute money.

Moreover, you’re introducing a margin of safety there – a company could steer a few decisions wrong, lowering its value, and you’d still be okay. Of course, a total implosion (like fraud) is something that is nigh impossible to totally protect against.

All of these benefits, yet it’s not that difficult to attain them at the outset of an investment.

One simply has to first have a good estimate of what a company is worth; then one simply refuses to pay more.

The second part of that equation is up to you.

But you have a lot of help with the first part.

For instance, fellow contributor (and long-term dividend growth investor) Dave Van Knapp put together a great valuation guide, which allows us to estimate the fair value of just about any dividend growth stock out there.

At that point, you should know what to do.

All well and good, but what does this look like in real life?

What does a high-quality dividend growth stock that appears to be undervalued look like in real-time?

Read on to find out…

Wells Fargo & Co. (WFC) is one of the four largest banks in the US, with diversified financial offerings across retail, commercial, and corporate banking services.

Although Wells Fargo is the fourth-largest domestic bank by assets, they’re the largest lender in the country.

Moreover, they have over $1 trillion in core deposits, which is an incredible source of very low-cost capital.

So investing in Wells Fargo is essentially a bet on the long-term health of the US economy and demand for capital and lending.

In addition, Wells Fargo just so happens to be one of the largest investments in Berkshire Hathaway Inc.’s (BRK.B) common stock portfolio, which, of course, is run by Warren Buffett.

That means a bet on Wells Fargo is pretty much a bet both on America and Warren Buffett. Hard to argue against both, which tend to do amazing things over the long run.

That’s because the company was forced to substantially reduce its dividend during the depths of the financial crisis.

However, they’ve gotten back on track in a major way, increasing their dividend for the past six consecutive years.

Not just that, they’ve grown their dividend by a compound annual rate of 49.1% over the last five years.

So you can see they’ve done an amazing job making up for lost ground; the dividend is now larger than it was pre-crisis.

And with a payout ratio of just 37.5%, there’s still plenty of room for more dividend increases moving forward.

On top of that monster dividend growth rate, the stock yields 3.18%.

That’s a pretty appealing yield in a world where negative interest rates are becoming more and more prevalent.

That average, of course, has been negatively affected by the cut and subsequent strong dividend growth, however.

Nonetheless, the dividend metrics across the board are really strong.

You’ve got an above-average yield, low payout ratio, and penchant to make up for lost ground.

As such, I would expect Wells Fargo to continue increasing its dividend fairly aggressively over the foreseeable future.

But before we get ahead of ourselves, let’s see what kind of revenue and profit the company generates.

We’ll first take a look at what’s happened over the last decade. And then we’ll compare that historical growth to a forecast for growth over the near term.

Wells Fargo’s growth profile will give us a pretty good idea as to what to expect in terms of dividend growth, since profit growth and dividend growth should roughly mirror one another over long periods of time.

The growth numbers will also help us determine what the stock is worth.

This number is pretty huge for a large, mature bank.

However, it was positively and largely impacted by the acquisition of Wachovia Corp. in 2009.

Wells Fargo significantly increased its customer and deposit base with that acquisition, which came about during the financial crisis. If there was ever a time to buy out banks for a deal, it was then.

We can see the bottom-line growth was comparatively constrained.

This was due to a number of factors.

First and foremost, the financial crisis hit almost all financial institutions fairly hard, with access to capital limited and demand for lending down.

In addition, Wells Fargo issued a large number of shares to acquire Wachovia.

So although revenue and net income grew briskly, there were more shares to divide that profit between.

However, the bank has been reducing its outstanding share count rather aggressively over the last couple years.

Looking forward, S&P Capital IQ believes Wells Fargo will compound its EPS at an annual rate of 5% over the next three years.

This is in line with what we see above, so I think this is a reasonable near-term expectation.

Keep in mind, though, that the prior ten-year stretch includes the financial crisis. I believe Wells Fargo’s long-term earnings power is likely a bit above this mark, likely closer to 7% or so.

The rest of the company’s fundamentals are really strong.

With a long-term debt/equity ratio of 1.03, the balance sheet compares well to domestic peers.

Furthermore, S&P rates their senior debt A, while Moody’s rates it A2. These are great ratings.

Profitability is also extremely robust, with the bank at or near the top of the heap across the board.

If you’re looking to invest in a large domestic financial institution, I can’t think of any better than Wells Fargo.

It appears that Warren Buffett can’t either.

The stock is trading hands for a P/E ratio of 11.80 right now. Not only is that significantly below the broader market but it’s also a bit below the stock’s own five-year average P/E ratio of 12.0. The price/book ratio is perhaps a more accurate method to value banks, and it’s certainly common to use it. Well, the P/B ratio sits at 1.4 right now, which also compares well to the five-year average of 1.5 for this stock. These lower-than-average ratios combined with a higher-than-average yield paints a picture.

So the stock does seem to be cheap in both absolute and relative terms right now. What, then, is a fair price? What’s a good estimate of its intrinsic value?

I valued shares using a dividend discount model analysis with a 10% discount rate. I then factored in a 7% long-term dividend growth rate, which seems reasonable when looking at the low payout ratio and long-term earnings power. The DDM analysis gives me a fair value of $54.21.

My viewpoint is that this stock is meaningfully undervalued right now. And that viewpoint is shared by professional analysts that have taken the time to analyze and value the stock.

Morningstar rates WFC as a 4-star stock, with a fair value estimate of $61.00.

You can see a consensus here: the stock is cheap. Averaging out the three viewpoints gives us a final valuation of $56.07. That estimate means this stock is potentially 17% undervalued. 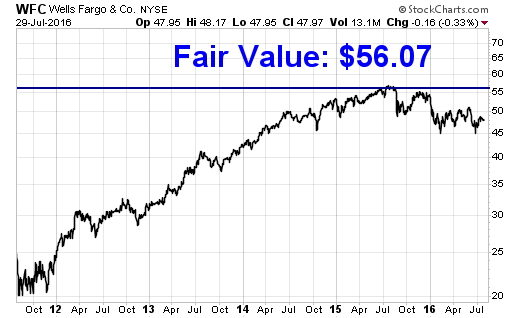 Bottom line: Wells Fargo & Co. (WFC) is a high-quality bank with a huge source of low-cost capital. It has massive exposure to the US economy. Moreover, this stock gets a big nod from Warren Buffett. All of this bodes well, in my view. And I believe plenty of sizable dividend increases are yet to come. If all of that weren’t enough, the stock appears to have 17% upside right now. This stock deserves serious attention from long-term dividend growth investors.