It is hard to believe we are already in July and more than halfway through 2016; although, down here in steamy Miami summer arrived some time ago with its usual combination of heat and humidity.

The first half of 2016 was notable for how bizarre the world has become over the past couple of quarters.

[ad#Google Adsense 336×280-IA]The 10-year treasury bond is sporting record low yields of under 1.4% and actually returned more than double the appreciation of the S&P 500 in the first half of the year.

The S&P 500 almost returned four percent if you include dividends.

This is nothing compared with Europe where half of the Eurozone’s $6.4 trillion in sovereign debt currently has negative yields.

The pound sterling seems to hit multi-generational lows against the dollar on a daily basis since the outcome of the Brexit vote blindsided investors on June 23rd. The IMF continues to downgrade its global growth forecast and the United States looks like it is set for its nastiest presidential contest in my lifetime.

So given that backdrop, where should you as an investor allocate your money in the second half of 2016 to outperform the overall market? Let’s start with what I think should be significantly underweight within your portfolio.

Crude had a great run over the past four months, almost doubling from its lows in the mid $20s a barrel in February. However, oil has established a fairly hard resistance level at just over $50 a barrel and has failed every time it has tried to broach that mark in the recent weeks.

The strengthening dollar on the back of Brexit is a significant headwind to almost all commodity prices as well. Drilling will start back up in the shale regions if crude gets near $60 and the global demand picture is hardly encouraging at this point in time. For this reason, I will continue to be significantly underweight the energy sector within my own portfolio.

The strong dollar has been a major reason earnings have declined for four straight quarters on a year-over-year basis within the S&P 500. The second quarter should stretch this quarterly “profit recession” to five in a row when second quarter earnings reports start to trickle in. Given how much the dollar has gained against the pound, Euro, and Yen in recent weeks, those winds are not dying. 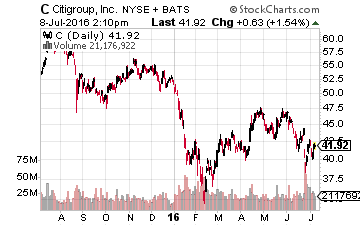 . In addition, firms with major presences in the U.K. are going to have to deal with the disruption Brexit will cause.

JP Morgan (NYSE: JPM) has said it will have to transfer or lay off thousands of employees in the city of London if Brexit actually occurs.

I know banks look cheap both on a book value and earnings basis if one looks at historical norms. However, declining yields are detrimental to bank’s net interest margins, a key component of earnings. In addition, a Clinton/Warren or similar ticket will hardly be good for the prospect of a more lenient regulatory regime entering the White House. 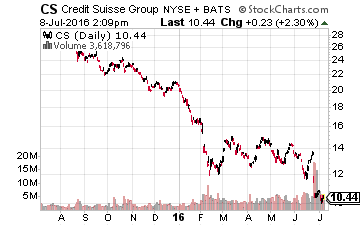 Finally, the European banking system was already teetering before the Brexit vote.

Italian banks have bad loan levels of 17% of loans outstanding and represent one of out of every four of bad loans in Europe.

To put in perspective, our banks’ bad loan levels were approximately five percent in the middle of the financial crisis.

So what is buyable in the current market?

The sector has been locked in the deepest and longest bear markets since 2008. However, the large cap concerns within this sector are collectively selling at their lowest valuations since 2011. In addition, this area of the market is one of the few showing both revenue and earnings growth in the midst of the tepid worldwide demand outlook. Finally, the sector has bounced off resistance levels about 10% below where we are currently trading a half-dozen time so far in 2016. 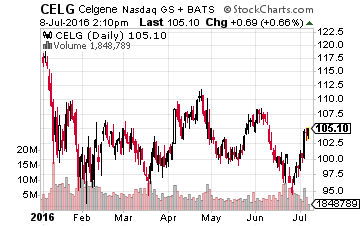 It did so again in the immediate aftermath of the Brexit vote. Celgene (NASDAQ: CELG) is a good representative of some of the values in this part of the market.

Earnings should more than double over the next four to five years, yet the stock sells at just a slight premium to the overall market multiple.

No wonder Jefferies just named it one of the best growth plays for the back half of 2016. One also has to like Amgen (NASDAQ: AMGN) and AbbVie (NYSE: ABBV) at these levels from a long-term basis.

Smaller concerns driven strictly by domestic economic activity is another good place to hide out right now. The two percent GDP growth of the U.S. might look extremely weak compared to every other post-war recovery the country has had, but it looks downright stellar compared to other major developed economies such as France, Japan, most of Europe, etc.

Small companies don’t have to deal with falling currencies and weak overseas demand. I continue to like the homebuilders here as we have had significantly below trend housing starts for a decade now while the population has grown more than twenty million. This should mean years of pent up demand especially given historically low mortgage rates and increasing household formation. 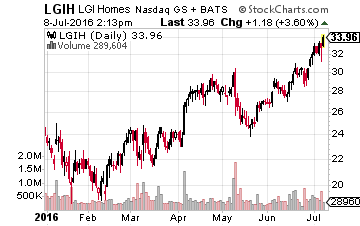 LGI Homes (NASDAQ: LGIH) which I have often profiled on these pages continues to be my favorite homebuilder.

The company just announced home closings for the first half of 2016 rose almost 30% over the same period a year ago.

Earnings should increase 30% to 40% this year and the stock, despite a nice recent rally, still goes for just 10 times forward earnings, a big discount to the overall market multiple.

Those are just a few ideas for investors as we head into the back half of 2016.