While we may argue about the correct size of the Federal government or what actions they take and if they are doing enough, almost everyone agrees that they would like to have the U.S. government as a customer.

The Fed spends one-fifth of the national GDP, has a AAA credit rating and prints its own the money. One way for investors to get a safe income from government spending is to own REITs that own properties leased to federal and state governments.

It’s a pretty even split between the amount of property the GSA owns vs. the amount it leases from private owners.

The top ten owners of GSA leased properties own about 34 million square feet of the total.

The Feds have a lot of landlords!

There are pros and cons to leasing to the GSA. Let’s start with the cons. First, doing business with the GSA is complicated. The agency requires an extensive proposal or bidding process for most of its purchases. It takes a specific level of contract expertise to be able to profitably do business with the federal government.

Also, if you lose a federal agency as a lessor of a property, it is very probable that the newly empty facility will be very difficult to release. Federal buildings are set up much differently than what the rest of the commercial property world rents. Many of the GSA leased buildings are decades old, and when lease terms end, the owner may need to pay for expensive upgrades or deal with losing the government agency as a lessee.

The biggest positive is that rent payments are a sure thing when you lease to the federal government. The GSA signs long term 10 to 20 year leases, typically with 5-year renewal options. Government agency offices do not like to move, so most leases are renewed over and over again.

A building leased to a federal agency becomes an annuity-like safe revenue stream. It takes specialized expertise to do business with the GSA, so there is a lower level of competition among companies that lease properties to the federal government.

There are five publicly traded real estate investment trusts (REITs) out of the 10 largest property lessors to the federal government. Of those, two can be considered pure play government leasing REITs. 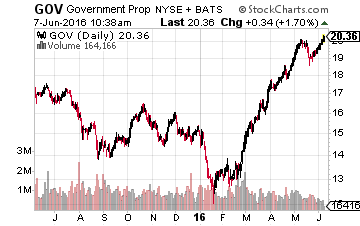 GOV has an investment grade credit rating and has paid regular dividends since going public in 2009.

The biggest risk is that 26% of the company’s rental income comes from leases expiring over the next two years. Management expects to renew the “vast majority” of this expiring rent, but the risk is out there. On the positive side, the current $0.43 quarterly dividend is just 69% of the current FFO per share run rate. GOV has not increased its dividend since late 2012 and the shares currently yield 8.6%. 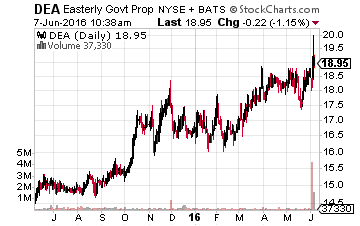 This REIT launched into the market with a February 2015 IPO.

The company currently has all 37 of its properties leased to federal government agencies.

The average remaining lease term is seven years and the company has only 6% of its leases coming up for renewal in the next two years.

DEA wants to be a growth focused REIT with the goal of buying newer buildings that are already leased or will be leased by a government agency upon completion of the purchase. Since it is a young company, investors must wait and see if management can generate a growing FFO per share cash stream. DEA shares currently yield 4.7%.

Finding stable companies that regularly increase their dividends is the strategy that I use myself to produce superior results, no matter if the market moves up or down in the shorter term. The combination of a high yield and regular dividend growth is what has given me the most consistent gains out of any strategy that I have tried over my decades-long investing career.