I don’t know about you, but I’m very frugal by nature.

Saving more than half of my net income for about six years now, living below my means and insisting on good value whenever I make a purchase has been a keystone of my ability to become financially independent at a very young age.

Of course, intelligently investing all of the excess capital generated by saving so much has been just as important – I personally invest all of it into high-quality dividend growth stocks, with the resulting portfolio set to send me five-figure dividend income this year.

But if one is so careful with their spending, shouldn’t they be equally as careful when it comes time to buy stocks?

And just like you can find both good and bad deals on goods and services (that is the price being either above or below what a good or service is worth), you can find the same is true with stocks.

But I actually think it’s even easier to decipher the difference between price and value for stocks, making it much more obvious as to whether a good (or bad) deal is in front of you.

For instance, you can find a valuation guide right here on the site.

From there, you only need to know price. And just about any stock quoting software will give you that.

Finding and buying undervalued dividend growth stocks could be a boon to your investment success, income, and wealth.

All else equal, a stock’s yield (provided it pays a dividend at all) will be higher when its price is lower; price and yield are inversely correlated.

The higher yield is a pop to the income you can expect on your investment right from the start. And this also means more aggregate income over the life of your investment.

Plus, all future dividend increases will be more effective in the sense that you’ll be receiving raises off of a higher base.

And that’s before factoring in any upside that exists in the space between the lower price you paid and the higher worth of the stock – a gap of which tends to close itself over time.

You’d think more money in your pocket would come attached with more risk, but that’s generally not the case.

Assuming the fundamentals of the business are unchanged, a lower price can only result in less risk: you’re spending less per share and possibly less on the entire transaction (depending on whether or not you’re investing with a fixed amount of money). The former is a margin of safety, while the latter is less money you’re putting on the line.

Now, all of the information just laid out is in reference to dividend growth stocks.

These are stocks like those you’ll find on David Fish’s Dividend Champions, Contenders, and Challengers list – an incredible compilation of more than 700 US-listed stocks with at least five consecutive years of dividend increases.

Like I mentioned earlier, I personally invest in these stocks. So I walk the walk.

And it’s not hard to understand why.

These are stocks that not only pay dividends but also regularly and routinely increase the amount of those dividends.

That organic income growth via regular dividend increases is really the “secret sauce” of dividend growth investing – the bigger dividend payments year after year increases one’s compounding that much more.

Bigger dividends can be reinvested into buying more shares, which themselves then pay growing dividends, which in turn buy even more shares. It’s a snowball of income and wealth.

But if you get a bigger yield right from the start, you might just turn that snowball into an avalanche.

So let’s take a look at a high-quality dividend growth stock that right now appears to be undervalued.

Gap Inc. (GPS) is a retailer of apparel and accessories for men, women, and children. They operate under the Gap, Old Navy, Banana Republic, Athleta, and Intermix brands. They have over 3,700 company-operated or franchised stores across 51 countries, with the ability to ship products to 214 countries.

No doubt about that.

And so the fortunes can be of companies that manufacture and market apparel, as Gap and its investors are unfortunately discovering in real-time – its stock has been cut in half over the last year, with the price declining by more than 50%.

Now, some of that is warranted.

Comparable sales across the company’s various brands were down 5% for the first quarter of 2016, and that’s versus a fairly poor 4% decline in Q1 of 2015.

But does a year-over-year comparable sales drop of 5% warrant a 50%+ drop in the stock’s price?

So let’s get to that.

Gap has increased its dividend for 11 consecutive years now.

That’s a pretty solid record for any firm, but I think it’s especially solid for a company doing business in such an ever-changing industry.

Even more impressive is the rate at which they’ve increased their dividend, with a 10-year dividend growth rate of 19.2%.

That’s one of the strongest long-term dividend growth rates out there; however, recent dividend raises have slowed dramatically due to the company’s sales concerns.

The most recent dividend increase was less than 5%, and the company also already announced that it plans on keeping the dividend static this year. While a frozen dividend for this year will not disqualify them as a dividend growth stock (or Mr. Fish’s list) since their payout this year will be larger than last year’s, it’s a disappointing development that should be considered.

That said, investors are locking in a much higher yield than what was available as recently as late last year.

And at 5.11%, the current yield should be considered as a pretty significant offset to the near-term dividend growth uncertainty.

That yield isn’t just high in absolute terms but also relative terms: it’s more than twice as high as the stock’s five-year average yield of 2.3%.

There’s other good news regarding the dividend.

The payout ratio sits at just 40% right now, which means the dividend in its current state appears to be quite safe while the firm works through some of their sales and inventory issues.

So the dividend has some things to like and some things to not like. Namely, you have that big yield due to the massive drop in the stock’s price weighed against the near-term uncertainty regarding dividend growth.

This should tell us a lot more about the overall health of the business and what it’s likely worth.

Meanwhile, the company’s profit on a per-share basis has grown rather substantially over this same period.

This excess growth has come about largely due to Gap’s regular and sizable share repurchases. Over this ten-year stretch, the company reduced its outstanding share count by about 50%, which is one of the most impressive reductions I’ve come across.

Is this kind of EPS growth sustainable indefinitely?

Not likely, especially with flat revenue. There are only so many shares the company can buy back. Moreover, the company’s EPS came in quite a bit lighter in FY 2016 compared to FY 2015, and this is after years of fairly secular growth. So clearly the winds of retail are changing, with e-commerce taking a toll on the company.

That said, S&P Capital IQ believes Gap will compound its EPS at a 9% annual rate over the next three years. This is, in my opinion, a rather aggressive outlook, especially considering the challenging comps over the last year or so. For perspective, EPS came in at $0.32 in Q1 2016 versus $0.56 for the same period last fiscal year, or a decline of about 43%. But they are now working off of a much smaller base.

The balance sheet is fairly strong, with a long-term debt/equity ratio of 0.52 and an interest coverage ratio of ~26.

Great numbers in absolute terms, although the industry is (fortunately for companies and their investors) rife with strong balance sheets. Gap specifically has taken on some debt over the last decade, but not at a level that’s worrisome.

Profitability is also pretty robust in absolute terms, although this is, again, a common theme throughout the industry.

It’s quite possible, though, that these numbers come down as retailers start to compete even more on price.

All in all, Gap is somewhat of an enigma among dividend growth stocks.

You’ve got that very high yield, moderate payout ratio, impressive demonstrated dividend growth over the last decade, and strong EPS growth to support all of that.

But you have a recent drop-off in sales and profit that is somewhat stunning, a dividend that’s currently frozen, and an industry that is rapidly changing as sales move online.

I can tell you that I was invested in this company for a short period of time, selling out when the stock was priced around $29 after noticing the disappointing trend in sales and the static dividend. The stock is now down almost 40% from that point, and I now see it as pretty compelling once more.

But there’s still a lot of uncertainty here.

As such, I think a large margin of safety should be sought (even larger than usual).

Is a large margin of safety present?

The P/E ratio for the stock is sitting at 8.09. That’s less than what Benjamin Graham, the godfather of value investing, proposed a no-growth stock’s P/E ratio should be (which is 8.5%). That’s less than half the broader market. It’s also markedly below the stock’s five-year average P/E ratio of 14.2. Every other basic valuation metric (price-to-sales ratio, etc.) is sitting at somewhere around half its respective recent historical average.

Wow. So the stock is basically priced for less than no growth. What would a fair price be? What’s this stock likely worth?

I valued shares using a dividend discount model analysis with an 8% discount rate and a long-term dividend growth rate of 4%. Admittedly, it’s tough to value the stock because of the recent issues and frozen dividend. It remains to be seen how long the dividend will remain frozen. But I am being pretty conservative here with the dividend growth expectation, balancing that out with some favor for the high yield. The DDM analysis gives me a fair value of $23.92.

Even with the uncertainty and issues, this appears to be a very interesting value and income play. Am I alone with that perspective?

Morningstar rates GPS as a 5-star stock, with a fair value estimate of $40.00.

The latter firm recently dropped its fair value calculation in half, but I like to average the three different valuation figures out so as to blend those different perspectives and methodologies together. That averaged valuation is $27.34, which means this stock could be 51% undervalued right now. 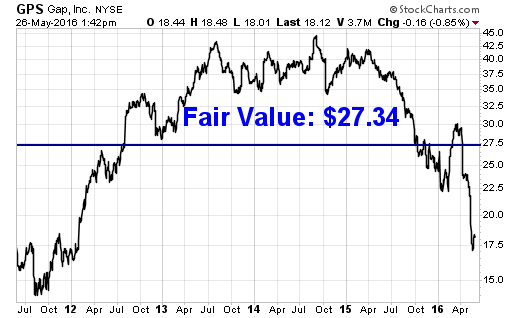 Bottom line: Gap Inc. (GPS) is having some difficulties adapting to a new world of retail. Recent initiatives show that they’re aware of the issues, but there’s still a lot of uncertainty. That said, the stock’s massive drop over the last year has led to what could be 51% upside on top of a yield of over 5%. Value and income of this magnitude aren’t around very often. If you’re comfortable with investing in this industry, this stock is worth a strong look.