You wouldn’t know it from looking at prices…

But a massive rally is taking place right now in natural gas stocks.

And even though we still have too much natural gas in storage, a big change in production could give this rally even more upside.

[ad#Google Adsense 336×280-IA]Last month, we set a record for natural gas in storage, with 2.6 trillion cubic feet sitting in giant caverns, just waiting to be used.

That’s enough natural gas to meet all demand for more than a month… without any additional production.

But the thing is, we’re producing another 2.7 trillion cubic feet every month.

In other words, we have an abundance of natural gas.

And as you know, when supply exceeds demand, prices fall. 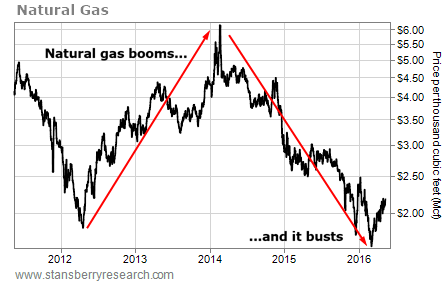 Interestingly enough, 2012 was also the last time we saw spring natural gas volumes near what they are today. In May 2012, we had a record 2.7 trillion cubic feet of natural gas in storage.

There is a good chance we’re seeing a repeat of 2012. As we often say, the cure for low prices is low prices.

What’s interesting is natural gas producers have ripped higher since bottoming on December 15. You can see those huge moves in the following table:

Of course, falling production will help prices. We saw something like this in 2012. Production peaked at the end of the year, then began to decline slightly… which was enough to send prices soaring higher. That’s the setup we have right now in natural gas.

While some of that optimism is priced into those stocks already, the trend is in our favor. We’re considering recommending natural gas producers to my Stansberry Resource Report subscribers. They should be on your radar, too.