The stock market is just incredible in so many ways.

But the fact that an everyday guy like myself can freely and easily invest in some of the best businesses in the entire world is one of the best examples.

Being born and raised here in the US means I have clear access to some of the most dominant companies the world has ever seen.

[ad#Google Adsense 336×280-IA]Many of these companies are so fabulous at selling the products and/or services they offer to the world that they’re able to routinely and regularly pay and increase a share of the growing profit that’s generated from that type of activity.

These increasing dividends form the basis of my investments strategy whereby I specifically target dividend growth stocks like those you’ll find on David Fish’s Dividend Champions, Contenders, and Challengers list.

Mr. Fish has compiled more than 700 US-listed stocks that have all increased their dividends for at least the last five consecutive years.

After all, dividends are a great source of passive income. And it’s really my right as a shareholder to collect a portion of the profit any company I’m invested in generates.

But growing dividends are even better since we all know inflation will slowly but surely eat away at one’s purchasing power if one’s income doesn’t keep up (increase).

What’s great about many of these dividend growth stocks is that the dividend growth tends to outpace inflation over the long run, meaning one’s purchasing power will increase, rather than decrease, over time.

However, while I’m a huge fan of these stocks – I invest my own hard-earned money in these stocks, as you can see by checking out my real-life portfolio – it’s important to realize that one shouldn’t just buy any stock off of Mr. Fish’s list at any price.

Obviously, one wants to make sure any investment they’re about to make passes muster, with some type of fundamental and/or qualitative analysis being of paramount importance and relevance.

Beyond that, one should also be mindful of valuation.

Specifically, one should aim to buy a high-quality dividend growth stock when it’s undervalued (i.e., priced less than it’s worth).

All else equal, your yield will be higher.

Well, price and yield move against one another; they’re inversely correlated.

So unless there’s some change at the corporate level regarding the dividend, the yield will always be higher when the price is lower.

This higher yield has a positive effect on your long-term total return prospects and aggregate income.

Yield is one component to total return.

And it’s actually the bigger component over the long run, with dividends accounting for the majority of the stock market’s total return over the last 100 or so years.

A higher yield thus positively impacts your potential long-term total return right off of the bat.

But capital gain – the other component – is also positively influenced when paying less by virtue of the upside that exists between the price you paid and the (higher) value of the stock.

If a stock is worth $50 but you paid $40, that $10 undervaluation on a per-share basis puts the odds on your side that the market eventually realizes the mispricing that’s occurred and reprices that stock closer to what it’s worth.

Sales may last a while, but they don’t last forever.

You get the higher yield, so your passive income is boosted right off the bat.

But any future dividend increases the company announces will also mean put more money in your pocket (relative to what you would have had had you paid a higher price and “locked in” a lower yield) when you’re basing pay raises off of a higher base, assuming you invest a fixed amount of money.

All of this also comes at less risk.

You’re either risking less on a per-share basis (meaning a greater margin of safety and minimized downside) or you’re shelling out less total capital (if you’re targeting a certain number of shares).

Obviously, I heed my own words: I only buy high-quality dividend growth stocks when I deem them to be undervalued.

But how does one tell if a stock is actually undervalued?

A lot of ways to go about determining a reasonable estimate of a stock’s fair value, but one method was put forth by fellow contributor Dave Van Knapp.

A prominent writer and investor in this space, his method is part of his dividend growth investing lessons.

This methodology can really help an investor ascertain a good idea of what a stock is likely worth, which can then be easily compared against the price.

When you find a high-quality dividend growth stock with an asking that’s well below what it’s likely worth, you should be pretty excited.

You may just have an undervalued dividend growth stock on your hands.

Speaking of which, I believe we have one on our hands right now.

I recently stumbled upon a dividend growth stock (featured on Mr. Fish’s list) that right now appears to be priced below what it’s likely worth.

But I’m not going to keep this information to myself…

Let’s take a peek, shall we?

Time Warner Inc. (TWX) is a media and entertainment company that owns a variety of television networks, a major feature film studio, and a library of content and digital media.

Time Warner has deep roots in media and entertainment, though through a number of restructures and spin-offs, this company is now purely focused on its core brands that include HBO, Warner Bros., CNN, TNT, and the CW.

While the landscape of content delivery and consumption is changing, Time Warner owns some of the premier properties in its industry, with HBO being a premier pay-television network and Warner Bros. occupying its place among the largest producers of film in the entire world.

And they’ve continued to register increasing revenue and profit right through some of these major changes in media, which has, in turn, allowed the company to increase its dividend quite regularly.

They’ve increased their dividend for the past seven consecutive years, a streak cut a bit short only because of some of those aforementioned spin-offs (which we’ll go over).

But what they perhaps lack in regards to length, they make up for in terms of growth.

Over the last five years, the firm has grown its dividend at an annual rate of 11.4%.

Certainly well in excess of inflation.

That kind of dividend growth is pretty appealing when taking the stock’s yield of 2.11% into account.

Meanwhile, the payout ratio is only 35.1% right now, meaning there’s plenty of room for Time Warner to continue aggressively growing its dividend payout.

They’re only paying out ~35% of their profit per share to shareholders in the form of a dividend, retaining the other ~65%. So there’s a lot of flexibility there.

In fact, the most recent dividend increase was actually 15%, showing an acceleration in dividend growth.

I believe that acceleration is present because Time Warner’s underlying bottom-line growth over the last few years has been really impressive, perhaps to the surprise of many who think that the changes occurring in media are going to doom companies like Time Warner.

While some traditional cable network operators aren’t well positioned for the changes, Time Warner has fantastic properties that are holding up really well.

I usually like to look at 10 years of revenue and earnings per share growth, which tends to show the long-term picture of growth while also simultaneously minimizing the effects of short-term headwinds and/or changes.

However, Time Warner spun off its cable system businesses and online subscription and advertising businesses in 2009, which was a substantial change for the company.

As such, I’m going to only look at growth from fiscal years 2010 to 2015 – a six-year period that factors out those major corporate actions that had a significant impact on both revenue and EPS.

Not much there, but the company’s strong buybacks and overall operating efficiency have resulted in excess profit growth that far exceeds that of which we see above.

Those aforementioned buybacks have helped tremendously: Time Warner Inc. has reduced its outstanding share count by more than 27% over this relatively short period of time.

Pretty incredible EPS growth here, though, especially when considering the changing and competitive landscape of media.

But will it continue?

One area of the business that is a bit of a drawback is the balance sheet.

Long-term debt and shareholders’ equity are essentially the same, leading to a long-term debt/equity ratio of 1.0.

The company’s interest coverage ratio is less than 5, as well.

These numbers aren’t necessarily bad in the scope of the industry – they’re actually comparable to many other major media competitors.

But the company is nonetheless heavily indebted relative to its size and earnings power, which is something that should be considered before investing.

Profitability, however, is pretty robust both in relative and absolute terms.

Overall, I think there’s a lot to like here.

You’ve got some of the biggest and best properties in the media and entertainment space. There’s a deep library of content and broadcasting rights to a number of sporting events.

However, the company’s balance sheet is leveraged. And the increasing changes and competition in media means one should seek out a sizable margin of safety before investing here.

Does a margin of safety exist?

The P/E ratio for the stock sits at 16.62 right now, more or less in line with the five-year average. However, the current yield is above its five-year average. And the accelerating dividend growth should be taken into account along with that higher-than-average yield. But I think a P/E ratio of less than 17 for a company growing at a similar annual rate is really appealing, leading to a PEG ratio of almost 1.

The valuation does seem pretty attractive here. But how attractive? What’s the stock likely worth?

I valued shares using a dividend discount model analysis with a 10% discount rate and a long-term dividend growth rate of 8%. This growth rate is on the high end of what I ordinarily use, but I’m factoring in the low payout ratio, accelerating dividend growth, high historical dividend growth, and forecast for impressive EPS growth moving forward. The DDM analysis gives me a fair value of $86.94.

So my perspective indicates the stock is undervalued. But my perspective is just one of many. Let’s compare my viewpoint with that of some professionals that have taken the time to analyze and value this stock.

Morningstar rates TWX as a 4-star stock, with a fair value estimate of $85.00.

It looks like I’m not alone here. There is a pretty tight consensus here on the valuation, but I like to average out the three different numbers so as to blend all of those different perspectives and valuation methodologies together. That allows for one final valuation, which should be more accurate. That final valuation is $83.38, which means this stock could be 9% undervalued right now. 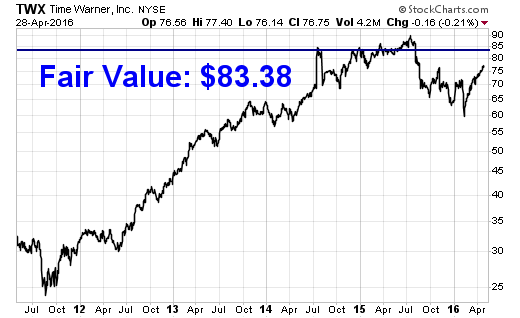 Bottom line: Time Warner Inc. (TWX) owns some of the biggest and best properties in media and entertainment. Even with the ongoing changes occurring in media, they continue to put out very strong results. Factor in what looks like 9% upside on top of accelerating dividend growth and this looks like a solid dividend growth stock at an appealing price.