Dividend growth investors like myself invest in high-quality businesses that pay and regularly increase dividends.

That means both plenty of income now and a good chance of more income later down the road, meaning one’s purchasing power is steadily improving.

I’ve adapted this strategy in pursuit of financial independence, whereby the growing dividend income I receive from the companies I own a slice of pay for my core personal expenses.

The great thing about this, though, is that just about anyone else can do this, too.

One simply needs to live below their means and regularly invest their savings into wonderful dividend growth stocks, collecting and reinvesting dividends all along the way.

You can find more than 700 examples of dividend growth stocks via David Fish’s Dividend Champions, Contenders, and Challengers list, an incredible resource featuring all US-listed stocks with at least five consecutive years of dividend increases.

But one doesn’t just randomly pick any stock off of Mr. Fish’s list and buy it at any price.

That’d be like saying investing in real estate is a good long-term strategy, so one should just buy any house in any neighborhood at any price.

As always, you want to make sure you’re getting the right investment at the right price.

The right investment is fairly obvious: you want to invest in a high-quality company that has strong fundamentals, competitive advantages, and a demonstrated long-term track record of success.

But the right price is a bit less obvious.

What is the right price, first of all?

The right price is one that is less – preferably substantially less – than what a stock is reasonably estimated to be worth.

Said another way, you want to buy a high-quality dividend growth stock when it’s undervalued.

When you’re able to pay a lower price for a dividend growth stock, a number of benefits start to work in your favor right off the bat.

All else equal, a lower price equals a higher yield.

So paying less means you’re almost always going to be “locking in” a higher yield, and with it more income all along the way.

Of course, this also positively affects your long-term total return prospects since yield is a major component of total return.

And the other component, capital gain, is also positively affected by the very virtue of any upside that exists between the price you paid and what the stock is worth.

You’re either laying out less cash altogether or you’re paying less on a per-share basis, but you’re limiting your downside in either case.

After all, would you rather pay $40 or $50 for the same object? Which is less risky? Which has more downside?

That first point – higher yield – is the major benefit I look forward to most when buying undervalued dividend growth stocks.

I knew all along – going from broke to financial independence in about six years – that a higher yield would mean more income right away and over the long haul, which would bring me closer to my long-term financial goals that much faster.

But the good news is that one doesn’t need to take blind swings at stocks.

It’s possible to estimate the fair value before you ever grab the bat.

Once you have a good idea of what a stock is worth, you’re in control.

You’re able to see those benefits manifest themselves in real life by only seeking out those high-quality dividend growth stocks that are selling for less than they’re likely worth.

And one such dividend growth stock from Mr. Fish’s aforementioned CCC list appears to be just that – available for less than it’s likely worth.

VF Corp. (VFC) is an apparel and footwear company that designs and manufactures or sources from independent contractors a variety of clothing including jeans, sportswear, outerwear, luggage, and footwear.

VF might not be known by its corporate name, but its brands are certainly popular.

While the winds of fashion change direction quickly, we’re talking about winter coats, boots, and jeans here. So these are staples that don’t go in and out of fashion based on what a New York runway is showing.

They’ve increased their dividend to shareholders for the past 43 consecutive years.

That’s an incredible record for any company but especially for a company in the apparel industry.

And lest you think that they’re just handing out small raises here and there to keep their streak alive, consider the 10-year dividend growth rate of 17.1%.

So they’re not just handing out small dividend increases.

These are meaningful payout boosts.

Meanwhile, the payout ratio is a moderate 51.9% right now, leaving the company room for continued dividend increases for the foreseeable future.

I like to think that a “perfect” payout ratio is 50% – that means a company is returning half its profits to shareholders, retaining the other half to continue growing the business.

That’s right about where VF is.

The only potential drawback here to the dividend metrics is the yield, which is currently just 2.31%.

While that leaves a bit to be desired in terms of one’s ability to collect income now, I think that yield needs to be looked at within the context of the strong dividend growth.

Furthermore, to the point made earlier about undervalued stocks featuring higher yields than what otherwise could have been “locked in”, this stock’s five-year average yield is just 1.8%.

So we’re looking at a stock that’s offering a yield that’s about 50 basis points higher than what it’s typically offered, on average, over the last five years.

More than 40 consecutive years of dividend growth always gets my attention, folks.

And this track record is really bolstered by the fact that the growth rate is so high.

All in all, just a lot to like here about the dividend.

That’s why we’ll take a look at VF’s revenue and earnings per share growth over the last decade, before checking out a forecast for future EPS growth – this will tell us a lot about where the company’s been, as well as where it’s likely going. It will also tell us a lot about the dividend and the likely value of the business (and its stock).

In a world where many companies are facing top-line challenges, this is a pretty impressive result.

We see some excess EPS growth there relative to revenue growth, driven by a combination of a reduction of the outstanding share count and profitability improvement pretty much across the board.

Looking forward, S&P Capital IQ believes VF will compound its EPS at an annual rate of 13% over the next three years, with stronger buybacks and double-digit growth in direct-to-consumer sales noted as major catalysts for that forecast.

If you think the growth is great, just take a peek at the balance sheet.

While I’ve seen plenty of companies over the last five or so years load up on cheap debt to retire expensive equity – driving EPS growth in the process – VF has actually not done this.

The buybacks have been modest, and the balance sheet hasn’t deteriorated at all over the last decade.

We now see a long-term debt/equity ratio of 0.26 and an interest coverage ratio over 18.

Profitability, meanwhile, has noticeably improved over the last decade, even without the use of increasing leverage.

Over the last five years, the firm has averaged net margin of 9.69% and return on equity of 21%.

Tough to be anything less than “wowed” by the fundamentals.

As such, one might expect that the stock is expensive.

Trading hands for a P/E ratio of 22.51, it’s roughly in line with the broader market’s valuation and the stock’s own five-year average P/E ratio. However, the yield is noticeably above the stock’s recent historical average. And you’re looking at one of the highest-quality dividend growth stocks out there.

But what’s the stock likely worth? What’s a reasonable estimate of its fair value?

I valued shares using a dividend discount model analysis with a 10% discount rate and an 8% long-term dividend growth rate. That growth rate is less than half VF’s demonstrated 10-year dividend growth rate. But I’m factoring in a payout ratio that’s risen over the last decade due to the fact that EPS growth hasn’t been quite as high. However, the forecast for future EPS growth and the company’s penchant for high dividend growth means a sizable margin of safety is likely present. The DDM analysis gives me a fair value of $79.92.

My analysis shows that this stock is likely worth far more than it’s selling for, but my viewpoint is just one of many. I’d now like to compare my thoughts with that of some professional analysts that have taken the time to analyze and value this stock.

Morningstar rates VFC as a 4-star stock, with a fair value estimate of $78.00. 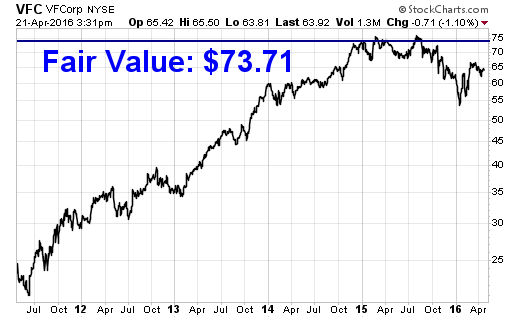 Bottom line: VF Corp. (VFC) is a high-quality company with strong brands that feature dominant market share. The growth is impressive, the fundamentals are solid across the board, and the dividend is growing at a very appealing rate. With the possibility of 15% upside on top of a yield much higher than its recent historical average, this appears to be an opportunity to invest in a great business at a great price.