Amazon.com Inc. (Nasdaq: AMZN) wants to be more – much more – than just the king of e-commerce.

The Seattle-based company used its huge servers to build Amazon Web Services into the globe’s largest cloud-computing company. And Amazon Prime, while not the leader in streaming media, is definitely a contender.

Now, Amazon has sets its sights on global shipping and logistics.

Neither firm put a dollar value on the five-year deal.

But the news sent small-cap ATSG’s stock soaring 16% in a day.

It also gave both average investors and the top dogs on Wall Street the feeling that – with Amazon horning in – this is a poor time to invest in the other major shipping firms out there.

There’s just one thing wrong with that notion – it isn’t true.

I know of one global shipping company that’s so competitive and innovative that it will flourish no matter what Jeff Bezos does… and will pay you a healthy dividend while you watch its share price climb and climb. 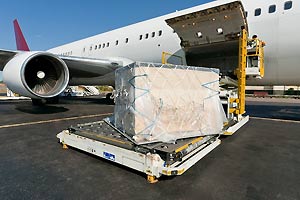 Now then, there’s a lot to like about the deal between Amazon and ATSG.

It’s obviously a huge boon for ATSG, which will fly the 20 aircraft and handle gate operations.

But as much as I like the deal, there are two downsides to buying thinly traded ATSG.

First, though its income statement improved last year, the growth trend remains weak. Over the last three years, ATSG has seen basically zero sales growth and a 1% decline in profits.

Second, it’s hard to see how this deal with Amazon makes it a long-haul e-commerce play. That’s key because analysts note that e-commerce is growing five times faster than the 2.2% of the growth of U.S. GDP.

Last year, Amazon racked up $4.17 billion in shipping costs, moving more than 3 million boxes a day. The deal with ATSG will lower Amazon’s costs by moving roughly 15% of its package traffic in house.

And you can bet that Amazon is aiming for a much higher portion in the future. But this isn’t just about cost savings.

Amazon expects to sell a lot more stuff in the coming years and wants to reach its goal of same-day service for most of its clients. To make that happen, the firm needs to control the “last mile.”

That’s the movement of goods from a fulfillment center to their final destination – the last leg of a product’s trip before it arrives on the customer’s doorstep.

Plus, in the long term, Amazon wants a big slice of the $400 billion global logistics market. It aims to ship boxes for many other firms, as it’s doing now in China.

That’s a wise move: With a delivery network already in place, handling more packages on the same routes would cut costs and boost profits.

In the deal, Amazon received warrants to buy nearly 20% of ATSG, which could be a prelude to a full buyout. We may be looking at the early stages of a standalone division – Amazon Delivers.

The shipping sector has taken notice. The head of France’s quasi-public La Poste agency recently said that “Amazon is our biggest customer. It is in the process of becoming our largest competitor.”

Going Brown to Get in the Black

And eMarketer says global consumer e-commerce sales will hit $1.7 trillion this year. The forecasting firm projects nearly 40% growth in the next three years to roughly $2.4 trillion.

If we want to cash in on those numbers, we need to find a company deeply rooted in this unstoppable trend…

And that’s where United Parcel Service Inc. (NYSE: UPS) comes in. The global shipping giant has a 108-year head start on Amazon. It drops off more than 15 million packages a day to more than 6 million customers in more than 200 countries.

That kind of scale reaps huge rewards. The company earns $0.14 on every dollar of revenue, 37% more than chief rival FedEx Corp. (NYSE: FDX).

For every $1 UPS invests in the long-term growth of the business, fully $0.32 are earned back each year. That level of return on invested capital (ROIC) is almost unheard of in the thin-margin transportation world.

Even better days lie ahead as UPS focuses even more squarely on e-commerce. Over the next five years, UPS’ volume of global online retail shipments is expected to grow 21% a year.

This is also the closest thing you’ll find to a Big Data play in the transportation industry. UPS has invested millions of dollars in advanced software known as On-Road Integrated Optimization and Navigation (ORION). The system allows drivers to adjust their planned routes in the middle of the day, accounting for traffic, client needs, fuel savings, and many other factors on the fly.

These cost savings are real. A reduction of just one mile each day per driver over the course of a year saves UPS $50 million a year. Other tech investments, such as package rerouting software, are yielding great returns as well.

Well, Amazon represents just 6% of UPS’ domestic volume, according to Merrill Lynch. UPS management’s growth forecasts even account for some of the Amazon business that will be lost in coming years.

The real story here is the global market, which is growing faster and making even more money than UPS’ domestic market. Back in 2000, Big Brown earned just 6% of its profits outside the United States. Today, that figure is more than four times higher – 28% and rising fast.

For its part, UPS says global cross-border online retail sales will be its hottest segment, growing 35% a year through 2018.

This is a firm that truly rewards investors. UPS has returned $58 billion in dividends and buybacks to investors over the past 15 years. That compares to zero for Amazon. In fact, UPS’ dividend has grown 10% annually since the company’s 1999 IPO.

Look for that win streak to continue as UPS keeps delivering record-setting results. Fourth-quarter EPS rose 26% from a year earlier.

Don’t let Amazon’s moves in shipping “psych you out” – and don’t get intimidated like Wall Street apparently has. UPS is a great way to play the e-commerce boom and the global retail market for the long haul – no matter what Amazon does.

Beyond the long-term gains you’ll be piling up, its dividend growth will reward you with appreciation and higher yields.