I can’t imagine you’ll find a bigger cheerleader for investing in high-quality dividend growth stocks than me.

After all, it’s the investment strategy I used to achieve financial independence in my early 30s – the real-life, real-money portfolio I’ve built over the last five years will generate almost enough passive dividend income for me to live off of this year (other passive income sources close the remaining gap).

Better yet, because these are dividend growth stocks we’re talking about, the income my portfolio generates should grow organically (all by itself) for the rest of my life.

That means pay raises just for being a shareholder. More money just for existing!

There’s definitely a methodology to it all.

First, I stick to high-quality businesses.

These are businesses that provide products and/or services that are practically ubiquitous.

Food, beverages, cell phones, grocery stores, insurance, the Internet. There’s opportunities to invest in and profit from the stuff that people use every day.

And because people and/or other businesses demand these products and/or services, the companies that provide what the world really wants tend to increase their profits like clockwork over time.

Since there’s only so much profit a company can efficiently reinvest, the truly great companies out there share a good chunk of that growing profit with their shareholders in the form of growing dividends.

You can see that play out on David Fish’s Dividend Champions, Contenders, and Challengers list, which is a collection of more than 700 US-listed stocks with at least five years of consecutive dividend increases.

But just as important as sticking to high-quality dividend growth stocks, one should also aim to buy a stock when it’s undervalued.

A stock is undervalued when its price is below that which it is worth.

Price is just how much something costs. Price is how much you have to pay for something.

But value is what something is worth. Value tells you what you’re actually getting in exchange for your money.

How does one make sense of these prices?

By focusing on value, that’s how.

And doing that has never been easier, thanks to the pure amount of information the Internet has put in the hands of everyday people.

For instance, a free guide was put together by fellow contributor Dave Van Knapp, which aims to make the process of valuing dividend growth stocks as quick and easy as possible.

Once you know the value of a stock, you can then know whether or not the price is fairly appropriate. You’ll have a reasonable idea as to whether it’s undervalued, fairly valued, or overvalued.

Buying a high-quality dividend growth stock when it’s undervalued is obviously the best of the three choices.

And that’s because you’ll be looking at a higher yield, better long-term total return prospects, a bigger foundation upon which future dividend raises will be based upon, and lower risk.

Investors like Warren Buffett have made it practically a sport to go out and find the most undervalued stocks possible because of these benefits.

See, price and yield are inversely correlated. All else equal, a lower price equals a higher yield.

So you’re “locking in” a higher yield when paying less.

And you’re either spending less money or buying more shares when paying less. In the case of the latter (assuming a fixed investment amount), you’ll be receiving a larger dividend check for potentially the rest of your life, and the compounding nature of dividend growth moves along faster when you’re receiving a pay raise on more shares over and over again.

This of course also positively affects your long-term total return. In addition, any upside captured if/when the stock moves closer to its fair value means more capital gains on top of whatever would be ordinarily captured as the business profits more and more over time.

Having $1,000 to invest goes much further when you’re paying $20 for a stock worth $30 than it would if you were to pay $30 or more. You’re risking less capital on a per-share basis, meaning less downside risk.

A lot to like about buying high-quality dividend growth stocks when they’re undervalued.

That’s exactly why I’m going to share some information on a stock that’s featured on Mr. Fish’s list that right now appears to be undervalued.

I’ll be honest with you.

I’m not a huge fan of technology companies.

However, the world is changing fast. And almost every company could be construed as a “tech” company in some fashion. If a business isn’t embracing technology in some fashion, they’re dying.

But whereas tech companies rose and fell fast during the dot-com bubble, there are a number of major technology companies that currently produce prodigious cash flow, sport excellent fundamentals, and regularly pay shareholders growing dividends.

Moreover, they’re well positioned in regards to swallowing up young upstarts rather than having to worry about being out of business tomorrow.

It’s these mature tech companies that I like to personally invest in, seeing them as a safe way to play large trends like data storage, cloud computing, and the Internet of Things.

Cisco is one such company.

This is a global firm, with North America representing just 60% of its sales.

But that’s because they didn’t initiate a dividend until 2011. So they’ve been increasing their dividend as long as they’ve been paying one.

And the increases have been nothing short of amazing: the three-year dividend growth rate stands at 31.6%.

Notably, that yield is actually higher than what you’ll get from a number of utility companies right now.

Really incredible. A big tech company paying out a higher yield than a stodgy utility. Tells you something about the way valuations have shifted.

That yield is also more than 130 basis points higher than the five-year average yield for this stock.

So that point about more income being locked in is staring at you right in your face here.

The good news is that with a payout ratio of just 51.5%, Cisco’s dividend is very sustainable and very likely to continue growing fairly aggressively over the foreseeable future.

I believe aggressive dividend growth will continue not just because the payout ratio is moderate, however.

Cisco’s underlying revenue and profit growth gives me a lot of confidence in saying that.

I like to look at the last 10 years’ worth of a company’s growth because that tells me a lot about what they’re doing over long periods of time. Looking at just a couple years here or there doesn’t tell you much due to the cyclical nature of many industries and even the broader economy.

Revenue grew at a nice clip here, but the bottom line was helped by consistently sizable share repurchases over the last decade, resulting in Cisco reducing its outstanding share count down by approximately 18%.

Notably, the company also just recently announced it was adding $15 billion to its buyback program, boosting the authorization up to $16.9 billion. That’s good for over 12% of the company.

One thing I like about some of the larger, more mature tech companies is that they usually sport incredible balance sheets with little debt and lots of cash. This makes them extremely flexible in an industry that values that. Tech changes fast, but having a lot of financial firepower means competitors can quickly become subsidiaries.

Cisco’s long-term debt/equity ratio sits at 0.36, while its interest coverage ratio is over 20.

Very solid numbers in both absolute and relative terms. But what really catches my eye is the fact that Cisco has over $60 billion in cash on the balance sheet, putting the company in a very sweet spot.

They’ve taken on debt not out of need but rather out of seeing the value in low interest rates.

Profitability continues the theme here, where the company is just really impressive, fundamentally, across the board.

These numbers compare well to most companies in general, but they also hold up extremely well against any major competitor.

While Cisco doesn’t have the longest dividend growth streak around, every 25-year track record has to start somewhere.

With strong organic growth, an incredible buyback program, plenty of cash, and a moderate payout ratio, their dividend is as poised for strong growth as any I’ve seen.

With all these wonderful attributes, we’d expect to pay a premium.

Instead, Cisco appears to be trading at a discount…

The P/E ratio sits at just 13.79, a major discount both to the broader market and Cisco’s own five-year average P/E ratio of 14.5. And that yield, as mentioned, is sitting way above its recent historical average. Like I pointed out earlier, this is a stock growing faster and offering a higher yield than many utilities, yet valued way lower. Totally different industries, to be sure. But still noteworthy.

Seems awfully cheap for the kind of quality and growth we’re looking at here. But what would then be a fair value. How cheap is it?

I valued shares using a dividend discount model analysis with a 10% discount rate and a 7% long-term dividend growth rate. I think this growth rate is fair when looking at the dividend metrics, which are bolstered by the fact that Cisco is retiring so many shares (which are less shares due dividends). The DDM analysis gives me a fair value of $37.09.

I believe this stock is deeply undervalued. But how does my opinion compare to those of professional analysts?

Morningstar rates CSCO as a 3-star stock, with a fair value estimate of $27.00.

So I came in on the high side, but even the most conservative estimate (Morningstar’s) gives the stock a fair valuation. And that’s a fair value on a stock yielding near 4% with outstanding dividend growth. However, I like to average out the three estimates so as to blend these different perspectives (and methodologies) together. That averaged valuation is $32.56, which would indicate this stock is potentially 17% undervalued. 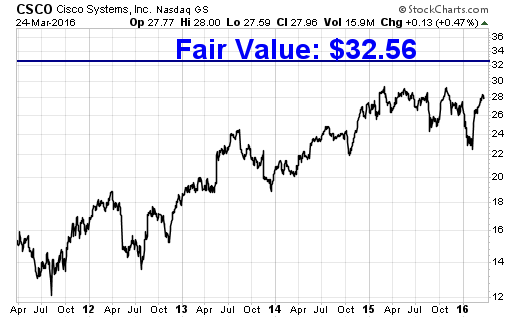 Bottom line: Cisco Systems, Inc. (CSCO) is a high-quality company with outstanding dividend growth that’s highly likely to continue for years to come. Great fundamentals and dominant shares of its key markets backed up by a fortress balance sheet places Cisco extremely well. On top of a yield that’s more than 100 basis points higher than its recent historical average, you’re looking at the possibility for 17% upside. I recently initiated a position in this company. You may want to consider the same.