In the coming months and years, I expect gold prices to rise.

But soon, possibly by later this week, I suggest you consider shorting gold – placing a bet that its price will fall.

[ad#Google Adsense 336×280-IA]It may sound irrational to short gold if you think it will rise. So let me explain…

I think the price of gold will rise in U.S. dollars and in other currencies around the world.

But I don’t think gold will rise relative to platinum…

Platinum is a precious metal, like gold. It’s used in jewelry, and in bullion coins and bars, as a store of wealth.

But unlike gold, platinum is also widely used as an industrial metal.

One of its main uses is in catalytic converters, which scrub pollutants out of car exhaust.

Since 1980, the price relationship between platinum and gold has been pretty consistent. Platinum has been more expensive than gold 82% of the time. But occasionally – as you can see in the table below – gold gets more expensive…

This is useful to see in chart form, too. Below is a long-term chart of the “gold-to-platinum ratio.” When the ratio is above one, gold is more expensive than platinum. When it’s below one, platinum is more expensive. As you can see, gold has only been this expensive relative to platinum one other time in the last 36 years… 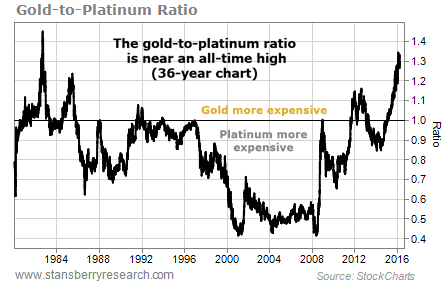 This isn’t proof that the ratio is going to come down right now… But when the relationship between two similar assets gets stretched this far, there’s a good chance it will snap back to “normal” soon.

The surest way to profit from the gold-to-platinum ratio coming back into “normal” territory is by placing a “pairs trade” that involves buying platinum and selling gold short.

You see, the ratio can fall three different ways:

I’ve already told you I expect gold to rise… and that the two metals usually move in the same direction. So why not just buy platinum?

Because I could be wrong. Gold could fall. And if it does, you’ll likely lose money on any gold and gold-stock positions you hold. There’s no reason to open yourself up to big losses on a platinum trade, too. Plus, the two metals could move in different directions.

Keep in mind, this isn’t a gold trade. It isn’t a platinum trade, either. It’s a relationship trade… betting that the relationship between gold and platinum will go from extreme back to normal. And the only way to profit in all three scenarios above is by buying platinum and selling gold short.

I don’t suggest pulling the trigger on the trade yet, though. Instead, wait for the trend to turn. In the chart below, you can see that there’s a strong trend in the gold-to-platinum ratio. Gold has been getting more expensive relative to platinum for most of the last two years… 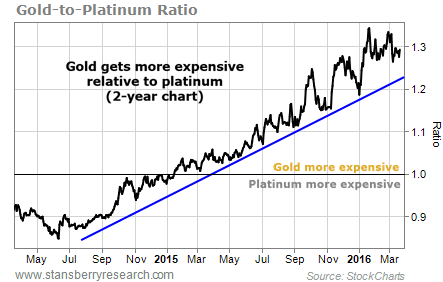 I suggest pulling the trigger once the ratio breaks its trend line.

The best way to make the pairs trade is to buy a platinum fund, like the ETFS Physical Platinum Shares (PPLT), and to sell a gold fund, like the SPDR Gold Trust (GLD), short. When you do, use equal position sizes for each.

If the ratio falls from 1.23 (about where the trend line is today) down to one, you would make 19% on the position.

So as you can see, even if you’re not expecting gold to fall, you may want to bet against it, anyway. It’s the surest way to profit from the gold-to-platinum extreme.