What’s your biggest fear as an investor?

Most people think of failure as losing money. But losing time and opportunity are, in my view, just as serious.

Today, I’m going to show you a surefire way to avoid losing all three when you make an equity investment…

In my experience, the biggest and most dangerous mistake otherwise excellent investors make is putting way too much capital in what are called “value traps.”

[ad#Google Adsense 336×280-IA]As I showed you yesterday, these types of businesses look so cheap that they just prove irresistible, especially for wise and knowledgeable investors who wouldn’t normally make such an obvious mistake.

But it’s a mistake you should never, ever make because it’s completely avoidable.

Let me show you how to block out this problem forever.

Here are a few good rules of thumb…

First, use a little common sense. Before you buy your next deep-value stock, ask yourself if it’s likely to turn out as well over the long term (10 years) as doing something “easy and obvious.”

That deep-value stock you’re thinking about buying might turn around. It might make you a lot of money. But is it really more likely to outperform consumer-electronics giant Apple (AAPL) over the next decade? I wouldn’t bet on it. Why do what’s hard when you can simply do what’s easy and obvious?

Second, learn to avoid – at all costs – any publicly traded company whose revenues have not increased over the last five years. If a business can’t grow over five years, there’s probably a good and obvious reason why… one that’s not going to change after you buy the stock.

Third, beware of companies writing off goodwill. This last part is very important. It’s the “secret” in the sauce.

Don’t let the jargon bother you. Goodwill is simply a fancy word for corporate assets that are hard to value because they’re intangible. It could be something as simple as a customer list that leads to lots of sales. Obviously, the list is worth more than the paper it’s printed on… but how much more? That’s where the accountants start arguing.

Don’t get bogged down in the details. Just understand this: When companies start writing off goodwill, it usually means that something important in their business is broken. Maybe their brands aren’t attractive to consumers anymore. Or maybe their patents are expiring. It could be any number of reasons… But in combination with a long-term decline in sales, it’s almost always a tough business problem to solve.

Our approach is centered on finding stocks that seem to be in a terminal decline. We look for companies whose shares are obviously out of favor (they’re cheap, trading around book value or less), whose revenues haven’t grown for years, and whose goodwill is being written off.

I asked my team of analysts to do a new scan across the markets, looking for companies that fit this model – out-of-favor shares, declining revenues, and goodwill write-offs.

They found more than 50 examples. But most of the names were small-cap stocks whose shares can be hard to sell short or that were involved in the oil and gas industry. The oil and gas sector has obviously been through a huge boom-and-bust cycle, so I’m not as confident in those results. When I tossed out the small caps and the oil and gas names, it left us with only eight companies in our current “terminal decline” portfolio…

Notice that three of the eight companies are in publishing, an industry that is being completely transformed by new kinds of media. News Corp (NWSA) is a huge, global leader in old-line publishing. It’s highly leveraged. And it has long been a favorite of major institutional investors. Seems like a classic value trap to me… 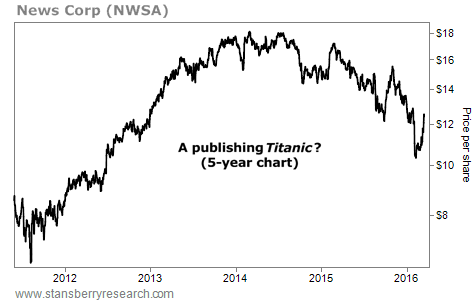 I hope knowledge of these “terminal decline” stocks will help you in three ways.

There’s the obvious: This approach will keep you 100% away from value traps if you will simply remember to use it.

There’s the inverse: This approach tells you a lot about what you do want to own. You want companies that can grow revenue easily and consistently. You want companies whose goodwill increases through time as more and more consumers come to love their brands and products.

(Again, this is where the accountants will start arguing… They’ll remind you that goodwill is never adjusted higher. But that’s just the accounting convention… it’s not reality. In reality, companies like Disney (DIS), Apple, and Coca-Cola (KO) have increased the value of their intangible assets steadily, and by huge amounts. That value shows up as premium over book value, but only because the accountants won’t revalue goodwill higher.)

And finally… This approach can give you yet another tool in your fight against the bear market that I believe is developing. It’s not hard to imagine that using News Corp as a major short position could provide your portfolio with some significant benefits as a “hedge” against lower equity prices.