Note from Daily Trade Alert: Given the sensitivity and tension involved in most political discussions, particularly in today’s heated climate, we’d like to remind our readers that Daily Trade Alert does not endorse any presidential candidate. That said, we think Marc’s article below offers value to anyone wondering what a Trump victory — or any other candidate’s victory for that matter — could do to their portfolio. Our hope is that readers focus on the big take-away from the article rather than attacking Marc or any of the presidential candidates. In short, in Marc’s own words, the purpose of his article is to show that no matter who is the President, over the long term, it won’t make any difference to the market. That’s what you should take away from the article and that’s what is going to make or save you money.

Politics dominate the news these days and, as someone who writes multiple columns per week, it’s hard for me to ignore the subject, even though I try to in my daily life.

Several weeks ago, on Oxford Club Radio, I talked about why Donald Trump is making America the laughingstock of the world. As I mentioned on the show, it “doesn’t instill a lot of international confidence to do business with or invest in the U.S. if a clown like Trump can get elected.”

[ad#Google Adsense 336×280-IA]I received many emails and comments about what I said.

And while there were a few who disagreed with me, the majority basically said, “What do we do with that information?”

After all, what my audience trusts me for is unbiased information to help them become better investors and retire wealthier (or live a more comfortable retirement if they’re already in that stage).

So what would a Trump victory in November mean for your portfolio?

Short term, I think it would be quite bad actually. The market doesn’t like uncertainty, and Donald Trump would likely be the most unpredictable president in U.S. history. At that point, the American people and the market would have no idea what to expect.

Trump has drummed home the message that, because he’s a successful businessman, he’d be able to get the economy going. That may be true, but he’d have to prove it before the market would believe him.

Contrast that with a Hillary Clinton administration. Regardless of what you think of her policies, she’s predictable. Wall Street can handle bad news and tough times. Again, what it doesn’t like is uncertainty.

There’s no telling what Trump would try to do or not do as president. He’s a wildcard.

If he wins the White House, I believe the market would sell off.

I’m talking about a 30% to 50% decline in a matter of months as investors decide to take their risk off the table until they have a better idea of what the landscape will look like.

But my response to that scenario: So what?

There are bull markets, bear markets and flat markets. And over time, the market goes higher.

These figures include World War II, two Kennedy assassinations, Vietnam, Watergate, the oil crisis, the Iran-Contra affair, Monica Lewinsky, 9/11, the Iraq War and other events that many cynics said were game changers for our economy and market. But stocks, even if they tanked on negative developments, always came back. 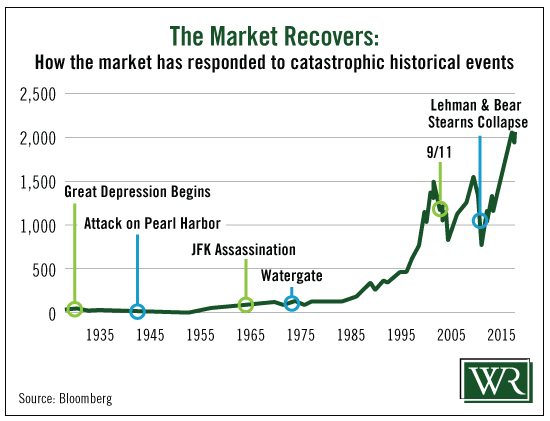 On June 18, 1972, the Washington Post first started reporting on the Watergate scandal, the worst political scandal in U.S. history and one that brought down an otherwise successful president.

On that day, the S&P 500 closed at 108.36. A year later, the market was down a few percentage points. Two years later, it was down more than 17%. Five years later, it was still lower than where it was before the scandal, though it had come back a bit – and at that time we were dealing with an inflation rate of 7% that was heading higher.

Ten years later, the market had come back to break even.

Think about that for a minute: the worst presidential scandal in history, followed by two presidents who were good men but ineffective leaders, an oil crisis and double-digit inflation. And the net effect on the market was nothing.

And five years after that, the market tripled. So if you had put your money in the market the day the Watergate scandal broke and not touched it for 15 years, you would have made a compound annual growth rate of 7.16%, right in line with the long-term average.

On the three-year anniversary, the markets were up a few percentage points from where they had been prior to 9/11.

And five years after the attack, the market had gained 19%.

These are just a few extreme examples to show you that despite bad presidents, bad policies and bad times, over the long haul the market goes up.

So if Trump wins in November, buy some puts or take your short-term money out of the market. But your long-term funds shouldn’t be touched. History shows us that if you react to the news or who occupies the White House, you’ll regret that decision.

Another note from Daily Trade Alert: Below you’ll find further explanation from Marc on this topic. It’s a response he left in the comment section of his original article:

Just to be clear, I am not saying that Hillary is better for America, the economy, etc. I’m saying the market will respond better in the short term because she is predictable and the market likes predictable. I could easily have said Marco Rubio instead of Hillary and the rest of the sentence would have been the same. I wrote about Hillary because she is the front runner for the Democrats.

The purpose of the article was to show that no matter who is the President, over the long term, it won’t make any difference to the market. That’s what you should be taking away from the article. That’s what going to make or save you money.

But I clearly touched a nerve. And perhaps calling Trump a clown was inelegant. He’s actually quite deliberate. But to think he’ll do what he claims he’ll do is ridiculous. He flip flops on the issues, talks in big broad terms without specifics on many policies. And while all candidates unfortunately lie, some of the things Trump says don’t even make sense.

I don’t like any of the “clowns” in this election. But as I stated in the article, Trump is a wildcard and no one can figure out just what he’d actually do if given the chance. It could be great. It could be a catastrophe. But the market typically won’t take that risk in the short term.

Long term investors shouldn’t worry. And as at least one commentor stated, if the market does sell off as a result of whoever winning the White House, use it as an opportunity to buy low.