It’s been said often enough that it’s a market of stocks rather than a stock market.

That’s obviously true when you think about it.

And then there are more than 4,000 stocks on the major US exchanges.

As you could probably imagine, not all stocks move in lockstep.

[ad#Google Adsense 336×280-IA]For instance, my personal portfolio, which holds a bit less than 100 high-quality dividend growth stocks, acts as somewhat of a microcosm of the broader market.

Even within my portfolio, I’ll see stocks move fairly independent of one another, especially over shorter periods of time.

What does this mean?

A “good deal” in the market is characterized as a stock whose price is below its fair value.

While the price you’re paying is easy information to come by – any stock quoting service will likely do – the actual intrinsic value of a stock is a bit more difficult to determine.

Price is simply how much you’re paying. Value is what something is actually worth.

And any long-term investor should always aim to buy high-quality stocks that are priced as far below their determined reasonable fair value as possible.

I consider myself a long-term investor – I’m still holding onto some of the first stocks I ever purchased.

Just as importantly, I’m a dividend growth investor. I invest in companies that reward their shareholders with sizable, regular, and growing dividends. After all, shareholders own publicly traded companies. And as an owner, I want to collect my fair share of the growing profit a company generates.

You’ll find more than 700 US-listed dividend growth stocks over at David Fish’s Dividend Champions, Contenders, and Challengers list, which is an incredible resource that’s maintained for the investor community free of charge.

All of the dividend growth stocks on Mr. Fish’s list have increased their dividends for at least the last five consecutive years.

When one is buying dividend growth stocks, one has to consider both the “dividend” and “growth” aspects as they relate to value.

The dividend is enhanced by virtue of the relationship between price and yield – all else equal, a stock’s yield rises when its price falls.

So if you have a fixed amount of money to invest (and who doesn’t?), you’re going to receive more income (via that higher yield on your investment) right off the bat.

That spread of more than 60 basis points means more money in your pocket right at the outset.

In addition, buying at that cheaper price also means more income for the life of the investment.

Not only are you receiving a bigger dividend on a fixed investment on an ongoing basis, but you’re reinvesting more income all along the way, buying more shares than you otherwise could have through the power of compounding reinvestment. More shares paying more dividends, which buys more shares!

Plus, the power of dividend growth means every dividend raise the company announces further accelerates that compounding.

And this all comes at less risk since you’re theoretically risking less downside when buying a stock when it’s undervalued.

Paying $30/share allows for less margin of error than what’s allowed when paying $25/share. That margin of safety offers wiggle room in case your estimate is wrong or the company does something unforeseen. It protects your downside while simultaneously maximizing your long-term upside.

The good news is that it’s actually not that difficult to ascertain a reasonable estimate of a dividend growth stock’s fair value.

A number of tools exist to help speed the process along, but one tool, featured right here on the site, was put together by fellow contributor Dave Van Knapp as one of his “investing lessons”. It’s another great resource.

In the name of hunting down those “good deals”, I recently stumbled upon a high-quality dividend growth stock that appears to be priced well below its intrinsic fair value.

But I’m not going to hog this information for myself…

CSX Corporation (CSX) operates a major rail transportation network in the Eastern US, comprised of more than 20,000 miles of track.

Railroads here in the United States operate under what’s essentially an oligopoly, comprised of only a few major players.

And it’s next to impossible for a new major network to become built due to the rights-of-way that would have to be procured; the profitable and sensible track is already laid out.

That means the incumbents have huge competitive advantages built in right away, in addition to the fuel-efficient nature of shipping by rail.

These advantages show up in CSX’s dividend growth track record: the company has increased its dividend for 11 consecutive years now.

Certainly not the longest dividend growth streak around, and railroads can be somewhat susceptible to broader economic downturns due to the fact that their volume depends on demand for products.

However, the railroad makes up for that somewhat short dividend growth streak with what has been truly outstanding dividend raises over the last decade.

Now, a good portion of that dividend growth was driven by the expanding of the payout ratio, which means that one shouldn’t expect that to continue indefinitely. To that point, the most recent dividend increase was right about half that level.

But the payout ratio is still quite modest, at just 36%.

So there’s plenty of room for aggressive dividend growth over the near term, even if underlying EPS growth doesn’t quite match up.

On top of all that, you’re also getting a yield of 2.87% on the stock right now.

That’s quite a bit higher than the broader market.

Remember how undervaluation interplays with income and income growth over the life of an investment when locking in a higher yield right off the bat? Well, here you go.

We’ll now take a look at the underlying revenue and profit (on a per-share basis) for the company over the last 10 fiscal years.

Looking at a decade’s worth of financial results tends to smooth out any temporary economic headwinds – we can certainly remember the financial crisis and ensuing Great Recession occurring over the last decade.

This information will tell us a lot about where CSX has been, which will help us to extrapolate some information out. We’ll also narrow that with a professional forecast for near-term growth, too.

Not particularly fantastic. The railroad – like quite a few other companies – was hit hard by the crisis. And secular changes in energy production means demand for coal shipments are likely permanently reduced, which causes top-line pressure.

However, the bottom line fared substantially better, thanks to sizable share repurchases and an increase in efficiency across the board.

The ~30% reduction in the outstanding share count went a long way toward helping that excess EPS growth, although massive improvements in profitability also helped, as we’ll see a little later.

Looking out over the near term, S&P Capital IQ believes CSX will compound its EPS at a 9% annual rate over the next three years, which is right in line with what we see above. Share repurchases should continue at a brisk rate, offsetting some of the uncertainty around the economy and the future of coal shipments.

Like all railroads, CSX carries some debt. The business is highly capital-intensive.

While CSX’s balance sheet isn’t quite as good as some major competitors, it’s also not bad.

The long-term debt/equity ratio is 0.92 and the interest coverage ratio is just a bit below 7.

Solid numbers and no cause for concern, but there is room for some improvement here.

The company’s profitability also had some room for improvement a decade ago, and concentrated efforts there have yielded great results.

Far better than what the company was churning out 10 years ago. They’re now pretty competitive in this department, though definitely not near the top of the heap.

It’s tough to dislike the railroad business. As long as people consume, goods will have to be transported. And railroads provide a very cost-effective way to do that, especially when no waterway connects the origin and the destination.

The barriers to entry here are textbook, which means the oligopoly in place is likely to remain firmly entrenched for as long as I’m alive.

With all this said, one would probably not expect a good deal on the stock.

But it appears that CSX’s stock is a “good deal” right now.

The P/E ratio sits at 12.49 right now, which is a material discount to both the broader market and the stock’s own five-year average of 14.9. Every other basic valuation metric is also notably below its recent historical average, while the yield, as noted above, is well above what’s typically been available, on average, over the last five years.

Seems to be a good deal, indeed. What would then be a fair price? How much of a good deal is this?

I valued shares using a dividend discount model analysis with a 10% discount rate and a 7.5% long-term dividend growth rate. I think this is a reasonable expectation when looking at the track record over the last decade, the forecast for underlying profit growth moving forward, and the fairly low payout ratio. The DDM analysis gives me a fair value of $30.96.

Value gives context to price. And in that regard, I think this stock’s price is attractive relative to what it’s worth. It also looks like I’m not the only one who thinks that.

Morningstar rates CSX as a 4-star stock, with a fair value estimate of $33.00.

I came in closer to S&P Capital IQ on this one, but you can clearly see the undervaluation, regardless. I prefer to average out the three valuations so as to blend these multiple perspectives together into a final figure. And that final valuation is $31.22, which would mean this stock is quite possibly 24% undervalued. 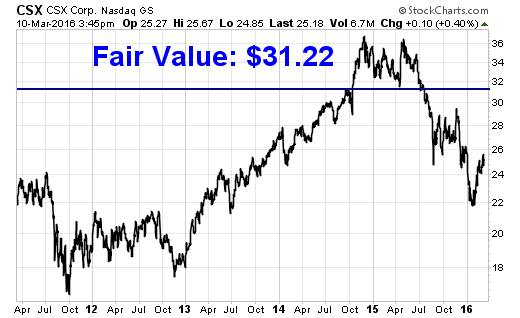 Bottom line: CSX Corporation (CSX) is a high-quality railroad company operating in what’s essentially an oligopoly with nearly unassailable barriers to entry. The company has improved across the board over the last decade, yet shares are about as cheap as they’ve been in quite some time. This “good deal” likely won’t last forever, so I’d strongly consider this stock while it still has the potential for 24% upside on top of a yield much higher than its recent historical average.