We’ve only seen this signal three other times since 1990. Each time, the major pipeline stocks rallied 119%, 177%, and 267%. That kind of upside potential gets noticed.

As my colleague Brian Weepie told you last month, some of the world’s greatest investors – like Berkshire Hathaway’s Warren Buffett and billionaire hedge-fund manager David Tepper – have bought in already.

You see, we’re approaching that “buy” signal again. It could arrive at any moment… And once the conditions are in place, we could see triple-digit gains in a relatively short period of time.

Pipelines are the “toll roads” of the energy industry. They simply collect fees for storing and transporting oil, natural gas, and other fuels across America.

Roughly 185,000 miles of oil pipes and 2.3 million miles of natural gas pipes connect markets all across the U.S.

That’s enough pipe to wrap around the Earth 90 times and still have enough mileage left to reach the moon.

Most pipeline owners have contracts of up to 10 years or more. And because a large part of their revenues come from fixed fees, most have minimal exposure to oil and gas prices. This means part of their profits are stable whether oil trades at $50 a barrel or $150 a barrel.

The thing is, when energy prices fall, pipeline companies’ shares can fall, too. You can see what I mean in the chart below of the Thomson Reuters Datastream Pipeline Index, which contains the 35 major pipeline stocks… 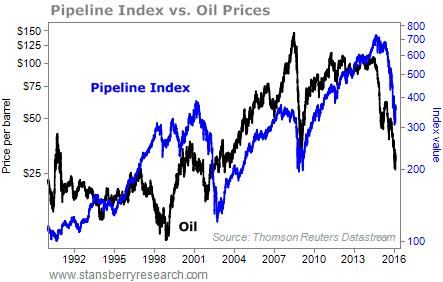 As you can see, pipeline stocks boom and bust along with oil prices. The last three times oil prices crashed – in 1994, 2002, and 2009 – pipeline stocks bottomed anywhere from three months to nearly a year later. This lag can make it difficult to buy at the right time. The key is to wait for the uptrend.

So where are pipelines in the cycle today?

Pipeline companies haven’t been immune to the oil and gas selloff. Lower energy prices are squeezing the revenues of most pipeline master limited partnerships (MLPs).

Energy Transfer Partners (ETP) is a perfect example. The MLP reported revenue of $34.3 billion in 2015… much less than its 2014 revenue of $51.2 billion and its 2013 revenue of $46.3 billion. The declining revenue will continue to affect ETP’s earnings.

The MLP’s earnings per unit fell from $3.04 in 2014 to $0.65 last year. And it continues to outspend its operating cash flow on projects. This may work out well for ETP in the long term, but it hasn’t posted positive free cash flow (cash from operations less capital expenditures) since the second quarter of 2013.

That makes it more likely that ETP will have to cut its distribution (the MLP version of a stock’s dividend) to cover its operating costs and service its debts.

The market frowns when pipeline owners cut distributions. If investors think a business can’t support its existing payout, they take it out on the unit price. ETP units have plummeted 61% since November 2014.

Even pipeline companies with funds to pay their distributions have had to reduce or temporarily halt those payouts because of the state of the financing market.

Today, less debt financing is available to pipeline MLPs. But they need this financing to buy and build assets. The other way for management to raise cash – selling more units – isn’t appealing in the current environment. The Pipeline Index is down nearly 50% since crude-oil prices peaked in June 2014. So pipeline owners may have to use the cash reserved for distributions to fund their operations and growth.

With all the uncertainty in the pipeline sector – and the possibility that some payouts may not be sustainable – many investors are selling their units.

Smart investors know these periods of shockingly low prices make the best buying opportunities. But it’s too early to know for certain whether we’ve seen the end of the pipeline-stock decline.

That’s what we’re waiting for… distribution cuts. Only two pipeline companies have cut their distributions so far. That means we haven’t missed our opportunity for triple-digit gains.

As more companies cut their distributions, we’re going to take positions. If you are looking for a great income investment with upside potential, take a look at the pipeline sector today.