Gold is up… And it could go up a lot more…

A gain of 16% to 19% over the next year is entirely possible, based on history.

[ad#Google Adsense 336×280-IA]Yesterday, I told you about the buying opportunity that just appeared in the Japanese yen.

The story for gold today is nearly identical – but the potential gains are much bigger.

The yen has three things in its favor:

These last two things had led to great returns over the NEXT 12 months, based on history.

Gold is in almost the same situation as the yen – but as I said, the upside is much greater… 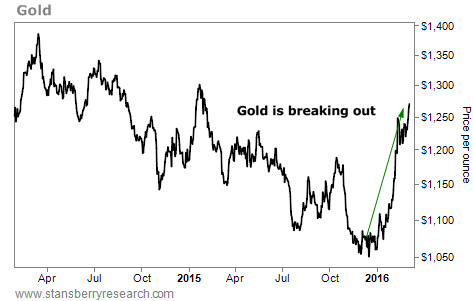 This breakout comes thanks to that big 8% gain in January… and another 11% gain in February. But monthly gains of that size are rare.

This has only happened 7% of the time, going back to 1975. Importantly, this extreme monthly move is a good thing for gold prices going forward… The table below shows the full details…

More than 40 years of history show that when gold climbs 8% or more in just one month, it tends to outperform going forward. And that outperformance is consistent, regardless of the time frame.

[ad#Google Adsense 336×280-IA]Importantly, based on the extraordinary performance in January, gold could deliver a gain of up to 19% over the next year.

Like the Japanese yen yesterday, it’s not just the one-month move that’s important…

Gold is actually “up” over the last 12 months.

This is big news.

Again, like the yen, gold does extremely well after a positive 12-month performance. Take a look:

Specifically, this is the performance of gold in the month AFTER a positive 12-month gain, annualized.

In short, you want to own gold, now.

Yes, gold has done well… but based on history – these solid recent gains tell us that we could have more to come.