Living below my means and regularly investing my excess capital into high-quality dividend growth stocks has literally changed my life.

The wonderful collection of businesses I own a slice of should, in aggregate, pay me dividend income in the five figures this year, which is an incredible accomplishment when considering I’ve only been at this for six years.

Even better, that dividend income should also, in aggregate, grow every year for the rest of my life.

I only buy dividend growth stocks – they not only pay but also routinely and regularly increase dividends.

[ad#Google Adsense 336×280-IA]You can find hundreds of these dividend growth stocks by perusing David Fish’s Dividend Champions, Contenders, and Challengers list, which is a fantastic resource for any dividend growth investors out there.

At 33, I’m well on pace for my ultimate goal of financial independence by 40 years old.

This kind of behavior has sure changed my life for the better, but almost anyone can do this.

You can change your life, too!

With all of this in mind, today I’m going to take a closer look at one dividend growth stock in particular.

We’ll go over the fundamentals, dividend metrics, qualitative aspects, and valuation to see if there’s a potential opportunity here.

Becton Dickinson and Co. (BDX) operates as a global medical technology company that develops, manufactures, and sells a variety of medical supplies and devices, laboratory equipment, and diagnostic products.

With corporate history dating back to the late 1800s, they’ve now grown into the world’s largest manufacturer of medical surgical products like needles and syringes.

What’s really wonderful about this business model is that there’s an incredible source of recurring revenue in place.

I like to refer to the core business model of Becton Dickinson as the old “razor blade” model where the customer has to keep buying new blades over and over again as they wear out.

Well, that’s kind of what you have here, but it’s needles and syringes instead of razor blades.

That said, the company’s product base is really diverse.

Their Medical segment – which includes the likes of diabetes care and respiratory solutions in addition to those aforementioned medical surgical products – generated approximately $6.5 billion of the ~$10.3 billion in total revenue for the company last fiscal year.

The other ~$3.8 billion came from the company’s Life Sciences segment, which includes diagnostic systems, biosciences, and preanalytical systems.

In addition, the company is broadly geographically diversified, with about half the company’s revenue coming from outside the United States.

Moreover, the recent $12 billion acquisition of CareFusion transforms Becton Dickinson by bringing a premier medical technology into the fold, which allows Becton Dickinson to now offer solutions for medication management and healthcare safety.

The financial results over the last decade are really solid, as we’ll now see.

Already secular and moving in the right direction, the top line was given a nice boost for FY 2015 after the acquisition of CareFusion was completed in March 2015. So the full power of that will be seen starting in FY 2016.

The acquisition was funded mostly via debt – CareFusion shareholders were mostly given cash for their shares – but there were some shares of Becton Dickinson involved (BDX used shares as currency), so there was a minor uptick in the float between FY 2014 and FY 2015.

That might appear to be concerning to anyone not digging into the numbers, but this really isn’t a true picture of the company’s earnings power.

Notably, EPS for last fiscal year were impacted by a total of $3.79, mostly due to the acquisition of CareFusion.

Factoring that out, EPS would have compounded at an annual rate of 10.40% over the last decade.

The company regularly backs its shares back, so I’d expect the shares recently issued to help pay for CareFusion to be repurchased in short order.

Now, as a dividend growth investor, a company’s ability and willingness to grow its dividend year in and year out for years or decades on end is vital to my investment rationale.

In fact, they have one of the longest dividend growth track records in the world.

They’ve increased their dividend for the past 44 consecutive years now, which puts them in truly elite company.

And over the last decade, they’ve compounded their dividend at an annual rate of 13.1%.

The only real potential drawback here is the yield. At 1.78%, there’s a lot to be desired there from any investor who’s seeking (or in need of) income now.

But I think when looking at that through the lens of the ability and willingness of the company to continue growing its dividend far into the foreseeable future, the stock could definitely complement an investor’s higher-yielding holdings.

This company has historically operated with a spectacular balance sheet.

However, the acquisition of CareFusion was in large part paid for in cash rather than shares, which means that Becton Dickinson took on a lot of debt.

The long-term debt/equity ratio of 1.58 is still respectable, but it’s a long way off from the ratio the company was sporting just a few years ago.

Credit ratings are still investment grade, though, with a BBB+ rating from Standard & Poor’s and Baa2 from Moody’s on senior unsecured debt.

Profitability is typically really impressive across the board.

Over the last five years, the company averaged net margin of 12.58% and return on equity of 19.96%, although both numbers were somewhat negatively impacted by the adjustments for FY 2015.

All in all, this is a really appealing company across the board.

Their dividend growth track record is among the best in the world. The underlying business model should remain robust since the world is getting older and larger, and people tend to require more medical attention as both of those trends continue. Furthermore, the world is growing richer, meaning more access to high-quality healthcare options are growing.

It remains to be seen, however, how well Becton Dickinson integrates CareFusion. It was a rather large acquisition, doubling the size of the company’s Medical segment. The possible accretive nature of the acquisition could bode well for what’s already a very solid company, but there’s a lot of debt to consider that wasn’t there before.

I valued shares using a two-stage dividend discount model analysis to account for the low yield and potential for outsized growth over the near term. I assumed a 10% discount rate and a 13% dividend growth rate for the first ten years (in line with the 10-year DGR). I then factored in a 7% terminal dividend growth rate, which appears reasonable. The DDM analysis gives me a fair value of $153.93, indicating a fair valuation. 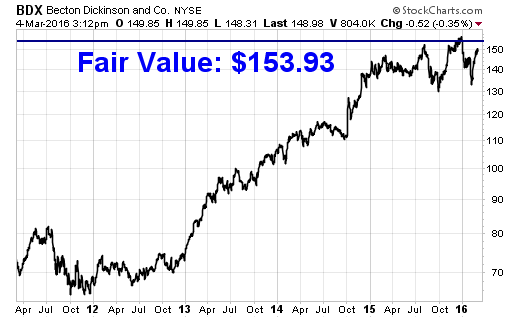 Bottom line: Becton Dickinson & Co. (BDX) operates a fantastic business model in an industry that almost can’t help but grow with all the long-term tailwinds in place. And as a dividend growth stock, it’s well into the upper echelon. That said, the business is in a peculiar place, with perhaps more uncertainty than ever before due to the recent sizable acquisition of CareFusion. Shares appear fairly valued right now, so it’s not an extremely compelling opportunity. But I still think this is a great long-term investment on any pullbacks.