While they’re fundamentally different, people tend to assume they’re fairly similar, or even one and the same.

Price simply represents the cost of something; it tells you how much you’ll pay to acquire whatever it is you’re looking at.

Value, however, represents intrinsic worth. Value tells you whether or not the price you see is reasonable. Value gives context to price.

[ad#Google Adsense 336×280-IA]This is an especially important lesson to learn very early on as a long-term investor.

While stock prices change essentially every second of every day the stock market is open for business, the value of those stocks don’t really change all that quickly.

In fact, major, multinational businesses that are worth well into the billions of dollars shouldn’t see their value change much, if at all, from day to day.

Yet that’s what you see when you look at the stocks that represent equity in these businesses.

A company worth over $100 billion can see its market value change by $1 billion when its stock goes up or down by 1%.

A billion dollars created or destroyed out of thin air.

That’s why it’s always important to focus on value. Value changes much more slowly, typically in increments over long periods of time.

But because stock prices change much faster, a long-term investor can take advantage of that phenomenon by buying a high-quality stock when the price is far below what the underlying value really is.

Buying high-quality dividend growth stocks that are undervalued is a great way to take advantage of the stock market’s folly.

First, high-quality dividend growth stocks tend to be wonderful long-term investments all by themselves.

After all, when buying a high-quality dividend growth stock, you’re generally investing in a business that is so increasingly profitable over long periods of time that the excess cash flow generated by operations is more than enough to reinvest back into the business so as to grow it.

So these businesses reward loyal, long-term shareholders with dividends that are likewise increasing over longer periods of time.

This incredible resource contains information on more than 700 US-listed stocks with at least five consecutive years of dividend increases, but many with decades of such behavior.

I happen to think so highly of these stocks that I’m betting my own future financial security and financial independence on them through my own real-life, real-money portfolio.

But while I think the merits of this strategy are clear and wonderful, that doesn’t mean one should buy any dividend growth stock at any time at any price.

We see above why it’s important to focus on value rather than price.

But it goes even deeper…

So outside of some change in a company’s dividend payout/policy, a lower price equals a higher yield.

As such, a 10% drop in a stock’s price should allow for a corresponding rise in its yield, thus meaning a 3% yield would rise to 3.3%. So on and so forth.

This means more income in your pocket now and possibly more aggregate dividend income for the life of your investment.

This isn’t true just because of the higher starting yield that compounds at a higher rate for years and years but also because any future dividend growth will be based upon that higher yield.

And, of course, this could mean additional long-term total return since yield is such a major component to one’s total return. This doesn’t even factor in the additional upside that could be created when/if the gap between price and value closes after one buys an undervalued stock.

In addition, buying a stock when it’s undervalued should reduce one’s risk.

The risk is reduced by very virtue of a margin of safety.

It’s just the same as anything else. Buying something when it’s cheaper means you’re risking less downside and/or less overall capital.

But how does one go about determining the value of dividend growth stocks?

Valuing stocks is a mix of art and science, numbers and intuition.

But developing or using a system specifically designed to help the process along is essential.

Fortunately, fellow contributor Dave Van Knapp compiled some key resources together to form a valuation guide, which should greatly help any investor when going about valuing stocks.

Next, I’ll put it all together for you readers by taking a closer look at one high-quality dividend growth stock that right now appears to be undervalued.

Wells Fargo & Co. (WFC) is one of the four largest banks in the US, with diversified financial offerings across retail, commercial, and corporate banking services.

Currently one of Warren Buffett’s single largest bets within the common stock portfolio for Berkshire Hathaway Inc. (BRK.B), betting on Wells Fargo is not only betting on domestic banking but also Buffett and Berkshire.

Wells Fargo is reclaiming some of its former dividend glory after having to cut its dividend during the midst of the financial crisis, now laying claim to five consecutive years of dividend increases.

And they’ve been aggressive with that: the five-year dividend growth rate is an astounding 49.1%.

Of course, that kind of dividend growth is present largely because they were coming off of such a low base after the cut.

The most recent dividend increase of just over 7% is more in line with what I think long-term investors should expect from year to year.

Their payout ratio is still incredibly moderate, at just 36.4%, which could even lead to some upside surprise in that regard.

But I think that conservative payout ratio is a tremendous asset since we’re seeing so much more scrutiny in the banking sector as it relates to trading and capital requirements.

However, the stock is pretty attractive even if the company delivers no more than high-single-digit dividend growth when considering the yield is 3.03%.

That yield is pretty appealing in both absolute and relative terms. It’s certainly much higher than the broader market, and that kind of income is a lot more than you’ll get from a Wells Fargo savings account.

Furthermore, it’s almost 100 basis points higher than the five-year average yield of 2.3% for the stock. Of course, the dividend has been growing fast after the cut, so it’s not the best comparison. Nonetheless, a yield of over 3% on one of the biggest and best domestic businesses is tough to pass up in this low-rate environment.

The dividend only tells us part of the story, though.

Looking at the underlying results of a business can tell us so much more in terms of the sustainability and likely future growth of the dividend, as well as what the stock is likely worth.

So we’ll look at how Wells Fargo has performed in terms of top-line and bottom-line growth over the last decade before moving into some other fundamentals.

10 years’ worth of financial data tends to tell a lot while also smoothing out temporary fluctuations/headwinds.

That’s obviously rather impressive for such a large bank; however, one should consider that Wells Fargo acquired competitor Wachovia Corp. in 2009, which substantially bolstered the size of Wells Fargo and its revenue base.

That acquisition resulted in the issuance of a large number of shares, though, which means that the bottom-line growth on a per-share basis should give us a better idea of what’s really going on here.

This offers a better glimpse of what’s going on here, though I think even that underestimates the true earnings power of the bank. The financial crisis affected the company’s operations somewhat significantly, which is also true for many other major financial institutions. However, Wells Fargo’s growth has noticeably accelerated from FY 2009 on.

My personal feeling is that the banks true earnings power lies somewhere in the middle of those two numbers, which is still really solid when considering the rather conservative nature of the bank.

So that’s an incredible source of low-cost capital for the bank.

Warren Buffett has long targeted businesses that have access to low-cost sources of funds, something insurance companies and big banks usually have in spades. That allows these businesses to seek out returns at almost no risk.

S&P Capital IQ is forecasting 5% compounded annual growth for Wells Fargo’s EPS over the next three years, which would be a noticeable drop from what we see above, and that’s before factoring in the more recent growth acceleration.

That could prove quite conservative, although any macroeconomic weakness will affect Wells Fargo.

The bank’s balance sheet is competitive and comparable when looking at the large domestic banking institutions.

Their long-term debt/equity ratio is 1.03.

S&P rates their senior debt A; Moody’s rates it A2. Both are excellent.

Profitability also puts Wells Fargo near the top of the class.

They are just consistently excellent in terms of operations across the board.

Of course, some investors just prefer to avoid banks. That’s their choice. They see banks as too difficult to understand and perhaps too risky if something happens to the economy.

But I think there’s just a lot to like here. As far as banks go, Wells Fargo is about as conservative as it gets.

Their access to low-cost capital is absolutely incredible, and their loan portfolio places them as a premier financier of US economic prosperity. And I think Wells Fargo (and its shareholders) will prosper as a result of that.

With all this in mind, we still want to aim to buy the stock only when the price is lower than what it’s likely worth.

The stock is available for a P/E ratio of 12.02 right now, which is right in line with the five-year average of 12.0. A common metric for valuing banks is actually the price-to-book ratio, and that sits at 1.4, which itself is also at a slight discount to the five-year average. Moreover, the yield, as noted earlier, is markedly higher than the recent historical average.

Seems to be slightly discounted, but by how much? What’s the stock reasonably worth?

I valued shares using a dividend discount model analysis with a 10% discount rate and a 7% long-term dividend growth rate. The moderate payout ratio, recent dividend growth, and demonstrated EPS growth allows me a lot of confidence in this model. The DDM analysis gives me a fair value of $53.50.

So I think the stock is undervalued here, which could be a solid opportunity to join Buffett and America at a discount. But don’t take just my word for it…

Morningstar rates WFC as a 4-star stock, with a fair value estimate of $61.00.

I think you can clearly see a trend here: the stock is believed to be undervalued. But I like to average out the three different perspectives together, which allows for one final valuation that takes multiple views and analyses into account. That final valuation is $55.77. This stock thus appears to be potentially 13% undervalued. 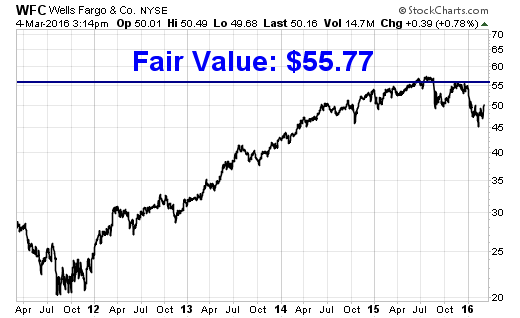 Bottom line: Wells Fargo & Co. (WFC) is one of the largest US banks, and arguably the highest quality of all. This is a bet on Buffett, the domestic housing and auto market, and the US economy in general. While that’s a bet I’ll generally take, it’s especially appealing when it’s available for a deal. And with the potential for 13% upside on top of a yield well above the broader market, this stock warrants a strong look from long-term dividend growth investors.