There is no such thing as a stealth bear attack.

Grizzlies are not sneaky.

In the wild, bear attacks happen because people either miss or ignore the warning signs. And then, folks don’t know what to do once the attack begins.

[ad#Google Adsense 336×280-IA]The same is true for bear attacks in the stock market.

If you were paying attention back in 2000 and 2007, you could have avoided the mauling that most folks suffered in the ensuing bear markets.

Heck, you could have even profited from them.

Those bear markets didn’t appear from out of nowhere. There were plenty of warning signs. And the bear almost always gives you a chance to get away.

The rally we’ve seen over the past few weeks may just be your last chance to get out before the bear attacks again.

Take a look at this long-term, monthly chart of the S&P 500 plotted against its 20-month exponential moving average (EMA)… 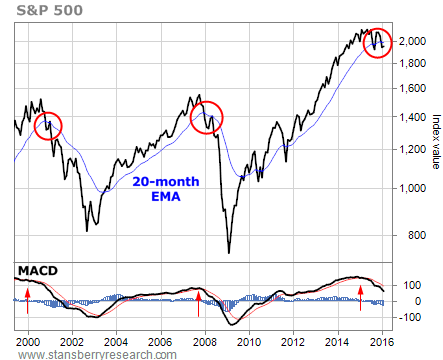 Regular Growth Stock Wire readers know I use this chart to define bull and bear markets. If the S&P 500 is trading above its 20-month EMA, stocks are in a bull market. If the index is trading below the line, the bear is in charge.

The moving average convergence divergence (MACD) indicator at the bottom of the chart provides one of the early warning signs of a bear market.

Without getting too complicated, if the black MACD line is trading above the red line, stocks are in a bull market. When the black line crosses below the red line, traders need to be on the lookout for the bear.

Notice how in 2000 and in 2007, the MACD indicator gave us that “bearish cross” from extremely overbought conditions. In both cases, the S&P 500 dropped below its 20-month EMA a few months later.

Of course, you’ll notice the S&P 500 also dropped below its 20-month EMA in 2010 and 2011. But in both of those situations, the MACD was more neutral than overbought. There wasn’t a bearish cross on the MACD in 2010. And in 2011, the bearish cross reversed just one month later.

So we didn’t have the conditions necessary for a bear market.

We did, however, see a MACD “bearish cross” early last year. The S&P 500 peaked a few months later. And we entered a bear market when the S&P 500 closed below its 20-month EMA this past January.

But as I wrote earlier, the bear almost always gives you a chance to get away.

Those were remarkably strong rallies. Stocks bounced off extremely oversold levels – crushing anyone who got too aggressive with short sales (and there were plenty of folks who made that mistake) and making folks think that maybe the bull market was back.

That’s when the bear attacked.

Now, take a look at the recent action on the chart.

As I said, the S&P 500 dropped below its 20-month EMA in January. Stocks were extremely oversold. And, as I warned back then, the market was setting up for an oversold bounce.

The S&P 500 has rallied nearly 150 points off its January low of 1,812. Folks who got too aggressive with short sales last month are feeling the pain of a short squeeze. And many of the financial-television talking heads are proclaiming the correction is over and we’re back in a bull market.

The talking heads are ignoring the warning signs of a bear attack. What’s worse is they’re telling you to ignore them, too.

The S&P 500 could still rally another 30 points or so before it kisses its 20-month EMA. So there’s still a bit more upside potential to this current bounce, if you want to stick around for it. For most folks, though, this is probably a good time to remember the old joke about two hunters who stumble across a grizzly bear in the woods.

One hunter stops, takes off his boots, gets his running shoes out of his backpack, and starts lacing them up on his feet.

The second hunter looks at the first hunter and says, “What the heck are you doing? You’ll never outrun that bear.”