If you’re a retiree, or a near-retiree, you’ve probably been told you should dump—or at least reduce—your stock holdings and focus on fixed-income investments.

It sounds like a smart move, right? After all, CDs, Treasuries and the like protect your principal, while one big downturn can wipe out your stock-market gains.

[ad#Google Adsense 336×280-IA]But going lean on stocks leaves you open to two big risks: that you’ll outlive your savings and miss out on the long-term gains only the stock market can offer.

But here’s the part most retirees overlook: if you’re married, the odds one of you will still be around at 85 take a big leap—to 72%.

That’s the lifespan side of the equation. Here’s the investment side: according to Oppenheimer, the S&P 500 notched an average annual return of 7.2% over any 20-year holding period from 1950 to 2010 (measured in rolling monthly periods). Try getting that kind of performance out of a Treasury or a CD.

You can slash your risk further by picking stocks with high yields, reasonable payout ratios (or the percentage of earnings paid out as dividends) and—a Warren Buffett favorite—economic moats, or advantages that are tough for competitors to match.

Here are two that fit the bill.

Take a Swim in 3M’s Moat

At first blush, 3M Co. (MMM) doesn’t look like a retirement stock. It’s an industrial firm, and most investors know that industrials are among the first—along with resource and consumer-discretionary stocks—to dive when the economy dips.

That’s true, but 3M has loads of advantages that make pole-vaulting over its moat a tall order. They include $1.4 billion of patents, technology and top-notch brands, like Scotch-Brite, Scotchguard and Thinsulate.

To those strengths, I’d add a product portfolio that’s as diverse as they come: a quick glance at 3M’s website reveals that it sells 19,180 items in the US alone, spread over 12 categories ranging from automotive to healthcare.

Finally, 3M knows how to keep a lid on costs: even though the anemic global economy and high-flying greenback held back its Q4 sales and profits, it managed to eke out a 0.6% expansion of its operating margin, excluding restructuring charges.

And in one crucial way, this is your grandparents’ 3M: dividends. The company has paid a dividend for 98 straight years and has hiked its payout for the last 57, easily nailing down a spot on the S&P Dividend Aristocrats list, whose members have boosted their payouts for at least 25 consecutive years.

There’s room for more hikes, too, thanks to 3M’s modest 53% payout ratio. The shares yield an above-average 2.8%. 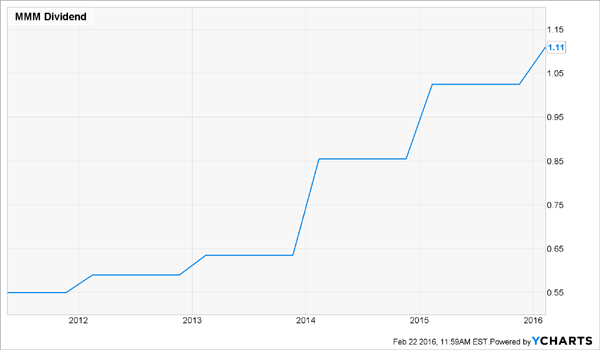 Right now, 3M trades at 17.4 times its expected 2016 earnings. That’s higher than both its five-year average forward P/E of 15.9 and the S&P 500, at 15.8. But with its heavy R&D spend, take-it-to-the-bank dividend hikes and buybacks (3M slashed its share count by 15% over the past five years, and its board just signed off on a new $10-billion repurchase plan), it’s a price worth paying.

JNJ: A Prescription for a Happy Retirement

I called out Johnson & Johnson (JNJ) as one of my top stocks to buy now and hold forever a little more than a month ago. If you followed that advice, you’d be sitting on a nice 7.6% gain already.

But if you missed out, don’t worry. The stock has plenty of room to run, especially if your time frame is long—say, the 20 years between your 65th and 85th birthday.

One thing that makes JNJ a retirement standout is its low volatility. It boasts a beta rating of 0.62, meaning it has historically been 38% less volatile than the S&P 500 as a whole. That means it doesn’t usually shoot as high as the average stock when the market’s on fire, but it won’t plunge as far when the market craters, either.

You can see that in action over the past year: 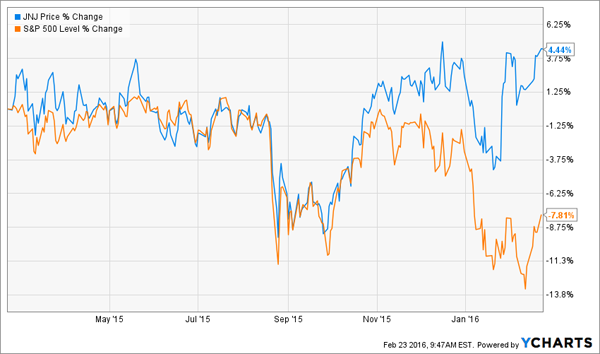 That’s partly a function of the company’s broad business. Like 3M, its products are everywhere and include medicine-cabinet staples like Neutrogena skin cream, Visine eye drops and Tylenol pain relievers.

But its offerings go much further. Aside from consumer goods (19% of 2015 revenue), Johnson & Johnson makes pharmaceuticals (45%) and medical devices (36%).

Like 3M, JNJ puts a huge emphasis on R&D, to the tune of $9.05 billion, or 12% of sales, in 2015. That’s translating directly into fast-selling new drugs: since 2009, it has released 14 with sales of $1 billion or more, and RBC Capital Markets is calling for 10 new $1-billion-plus sellers in the next three years alone. 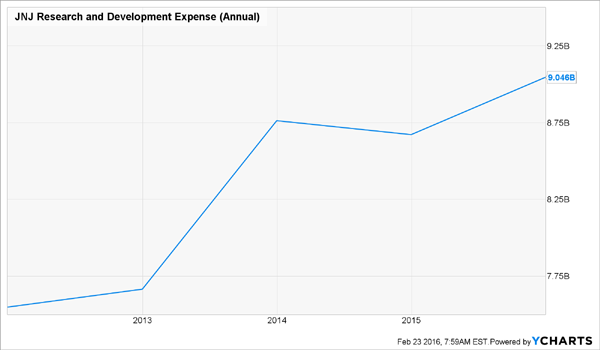 On the dividend front, JNJ easily earns a spot among the Dividend Aristocrats, with 53 straight years of payout hikes. The shares yield 2.9%, well ahead of the average S&P 500 stock, and the company pays out 54.8% of its earnings as dividends, so you can look forward to that payout rising throughout your golden years.