As if GDP growth crawling at 0.7% in the fourth quarter of 2015 and the stock market tanking in 2016 aren’t enough to scare everyone, something even more frightening is coming.

What’s happening is that the soldiers of fortune at the U.S. Federal Reserve have devised an insidious plan to solidify their control over free markets and America.

[ad#Google Adsense 336×280-IA]But, as I’m going to show you today, the reality is quite different.

This isn’t just an insane policy, it’s a MAD (mutually assured destruction) policy, the equivalent of a “nuclear option” in economics and finance.

Here’s what the Fed wants you to believe, what’s really going to happen, and how, if the Fed wins the battle it’s about to wage, Americans will lose their war for economic freedom.

After causing the credit crisis by manipulating interest rates too low for too long, the Fed had to rescue big banks by implementing ZIRP, their zero-interest-rate policy, and then quantitative easing (QE). 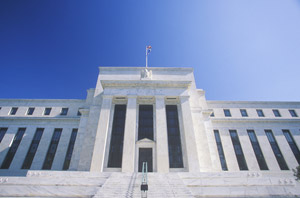 The one-two punch allowed insolvent big banks to borrow at no cost (ZIRP) and to buy trillions of dollars of U.S. Treasuries, which they’d re-sell to the Fed for fat profits under the $4 trillion buyback scheme (QE).

Too bad ZIRP and QE never trickled down to the economy at large, evidenced by GDP growth averaging less than 2% over the past eight years. Instead, the bulk of the Fed’s “stimulative” efforts pumped up various asset classes, especially stocks.

Now, with economic growth faltering, recessionary fears mounting, and increasingly volatile stocks slipping, the Fed is floating the idea of a negative-interest-rate policy, or NIRP.

What NIRP Means for the Banks

But instead of spurring (actually trying to force) lending by banks and spending by consumers, NIRP will have the opposite effect on banks and consumers, and magnify the dangers facing savers and investors.

NIRP not only lowers the cost of borrowing, taking it into negative territory – which theoretically means borrowers get paid to borrow – it flattens the yield curve.

As rates get compressed along the yield curve, flattening it, banks will be faced with lending for longer periods at lower interest rates, not higher rates. That reduces their net interest margins and profits.

Besides, if you’re a banker and rates have been manipulated to artificially low levels, are you going to lend a lot of money out at low fixed rates and face losing money on all those loans when rates eventually rise?

Banks are going to suffer. We know that because it’s already happening in Europe, where the European Central Bank (ECB) instituted NIRP last year. Bank stocks across Europe have been pounded down on average 30%, with some down more than 60%, in just the past few months. Obviously NIRP isn’t working for the banks over there.

And it isn’t working for the economy either. Eurozone growth last quarter was 0.3%.

What NIRP Means for Consumers, Savers, and Investors

Consumers aren’t going to run out and spend just because they might be charged to keep money in a bank.

Resorting to NIRP sends a direct message to consumers that the Fed’s worried about deflation; it’s a clear “no growth” message. So why would still leveraged and indebted consumers run out and spend if they believe that prices will be cheaper down the road?

They won’t. That consumers will defer spending in anticipation of falling prices is what the Fed fears most about deflation. That’s why the Fed’s message that it sees deflation won’t stimulate spending, this time it will curb it.

As far as savers and investors, it’s going to get really ugly under the shadow of NIRP.

Savers won’t get anything on their short-term holdings and instead of being charged to park deposits at banks, will take their cash home.

Fixed-income investors, especially pension funds and big fixed-income institutional investors, will all chase whatever yield they can get by moving further out on the flat yield curve to pick up whatever incremental yield they can. Of course, that shoves them all into a compressed long end of the curve where they won’t be compensated for the risks they’re taking there.

You can see how badly that’s going to end when defaults on the long end start exploding if a deep recession can’t be avoided.

The Fallout Will Be Nuclear

So, why is the Fed really planning on negative interest rates?

And make no doubt about it – they are planning on it despite what Fed Chairwoman Janet Yellen told Congress last week, that they had merely looked into legal issues.

That’s not true. The Fed already told banks to model negative interest rates into their upcoming stress tests. And Fed Vice Chairman Stanley Fischer, the Fed’s unofficial-official policy whisperer, in a speech back on Feb. 1, 2016, told the Council on Foreign Relations in New York that the Fed was discussing NIRP.

What’s nuclear about NIRP will be its fallout.

Because Americans will take cash out of banks, further impairing their deposit base and reserve requirements, something will have to be done about cash and withdrawals.

Mario Draghi, head of the ECB, on Monday told the European Commission that eliminating the European Monetary Union’s 500 euro note was being discussed.

Eliminating the $100 note is being pushed here by one of the most dangerous men the United States ever faced from within, Lawrence Summers.

Why is Summers dangerous? It was Larry Summers who, as Deputy Secretary of the Treasury under his mentor, former Goldman Sachs CEO and then Treasury Secretary Robert Rubin, pushed along with then Fed Chairman Alan Greenspan the final undoing of Glass Steagall, which led to the merger of investment banks and commercial banks and the credit crisis.

And for his hard work, Summers succeeded Rubin as Treasury Secretary and then pocketed millions from lending his name to a hedge fund that made millions betting against the leveraged banks Summers help create.

By eliminating large denomination bills central banks can better control the money supply. If it’s too hard to take stacks of $20 bills out of your bank and hide them somewhere, you’ll leave them in the bank.

Which works out perfectly for the banks, because in an insolvency they can take your money, or at least restrict you from withdrawing it, to help meet their reserve requirements or avoid insolvency.

It’s in the laws now – big banks can do that to you.

The Fed, under the guise of having to make NIRP effective, to save the economy, will push for the elimination of large denomination bills to keep depositors’ money in banks, to control the economy and save the banks (when their losses look like they’ll threaten the economy and markets) to enrich them again when the dust settles.

But when that dust settles, America won’t be the same. The final nail in the free market’s coffin will have been hammered in by the Fed, and most people won’t have any idea an oligarchy of bankers will have turned the United States into their central-planned, socialist playground.

Be afraid of NIRP. Be very afraid.