Gold is notoriously difficult to value…

It used to be a currency. And it’s still kind of like one… except that it’s rarely used in trade.

Most commodities – like oil, copper, cotton, and natural gas, for example – are produced and consumed.

Sometimes they’re stored for a while before they’re consumed… But that’s it.

New production and existing inventories are the supply. And consumption is the demand.

Gold is different. People buy it when they’re worried about the economy and the value of paper currencies. They buy it to hang around their necks or put on their wrists. They buy it and store it in safes for generations.

When’s the last time you heard about someone buying a barrel of oil or a bale of cotton… then hiding it for a few decades?

One of the best things I’ve read on this topic comes from Jack Schwager, author of the excellent Market Wizards series. In his book Hedge Fund Market Wizards, Schwager explained:

Gold is the only commodity where the amount of supply is literally about 100 times as much as the amount physically used in any year. That is not true of any other commodity, such as wheat or copper, where total supply and annual consumption are much closer in balance, and true shortages can develop. There is never any shortage of gold. So gold’s value is entirely dependent on psychology or those fundamentals that drive psychology.

What’s especially tricky is that as psychological demand (fear) rises, supply (from people’s jewelry and coins, as well as government coffers) evaporates. When everyone wants to buy, nobody wants to sell. Prices boom. Then at some point, when fear eases, lots of people want to sell… And there’s nobody left to buy. Prices bust.

What’s the fair, logical value of an asset like that?

I don’t know what gold is worth… But I’d be willing to bet people will place a higher dollar value on it at some point in the next five years than they do right now. 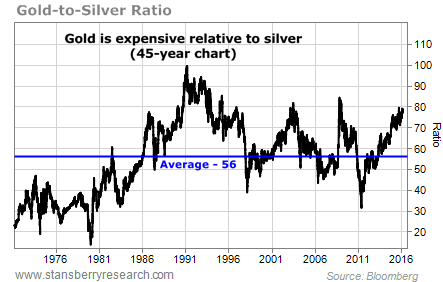 Now, let’s look at how much platinum it “costs” to buy an ounce of gold… 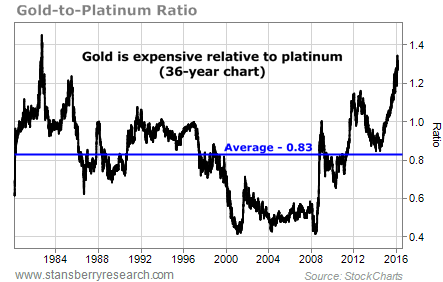 What should you take away from all this?

You can buy gold today. If you don’t already have some of your wealth stored in gold, I suggest you buy it. But we know that it’s relatively expensive…

So if you were thinking about buying gold, you may want to focus the majority of your purchases on silver and platinum instead. They’re the bargains of the precious metals world.