I have to send them a check every month, and sometimes it gets a little expensive. But I couldn’t imagine life without them.

In fact, life would be unbearable if they weren’t around.

But, to be completely honest, they have returned to me much more than I have ever given to them. Not in the same way, but you know what I mean.

No, it isn’t my family members. They’re a money pit of another kind.

[ad#Google Adsense 336×280-IA]Can you imagine life without electricity? It is unthinkable!

No one (well, virtually no one) lives without it. Not in this country, anyway.

And that is exactly why, for decades, utility companies were some of the most popular holdings in income portfolios.

But since the ‘90s, despite being as close to a “guaranteed market” as you can get, utilities have fallen off many income radar screens.

In fact, they aren’t the gods of the income world they once were.

Back then, every income portfolio was heavily into electric utilities. And why not? Even the lowest dividends were in the 6% to 8% range.

And they returned a little growth, too – 6% to 7% back then was very common. (In fact, those figures were considered small and substandard for stocks.)

But when Washington “fixed” yet another part of our world that wasn’t broken, new regulations drove utility companies’ dividends down and the growth stalled, causing utilities to lose a lot of their shine.

But then came the zero interest rate market, and their 3% and 4% dividend yields started looking pretty good.

And during the recent rout in January, they lived up to their decade-old reputation of being rock solid and reliable.

The year-to-date chart below for the Nasdaq, the S&P 500 and the Dow Jones Utility index shows just how resilient and reliable these power generators can be. 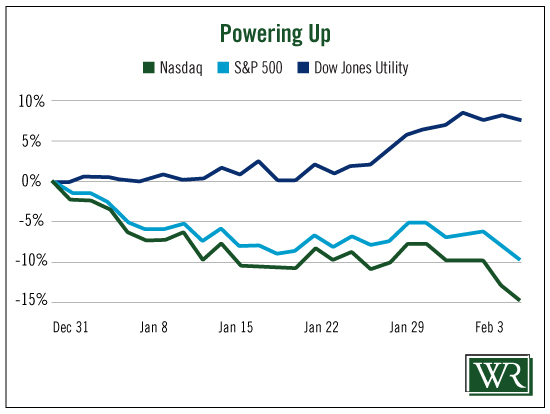 They not only sent out their quarterly dividend payments, which they have been doing forever, but they also were the best-performing and the most stable sector of the whole market.

Performance like that, especially during a terrible period in the market, is what income investing is all about. Well, at least the stability and predictability part of the income side of the market.

We’ll get to the payout side in a moment.

Yes, I know there are places that will pay out more on a quarterly basis than utilities do. But as a retired person with no way to replace losses, how many times can you take an 8% loss in one month before you lose your mind?

We’ve now gone through two major routs since August. At some point, you have to address the value of your sanity and your ability to continue to ride out the stock storm.

That’s where holdings with the market stability of utilities make the difference.

No, they won’t pay you sky-high returns, but you will sleep better at night. And in the current income environment, which doesn’t seem to be changing in the near future, just their dividends pay three and four times what savings and CDs do.

But, as with all parts of the stock world, even with their long history of being so stable and predictable, utilities require a little caution, too. Not as much as in the more aggressive parts of the market, but some precautions are still necessary.

You want a utility that isn’t paying out more in dividends than it’s earning. This is called the payout ratio. It is found by dividing the dividend paid by the company’s earnings. [Note: You can also use cash flow instead of earnings. Read Marc’s thoughts here.]

For example, AES Corporation (AES), an electric utility, reports a payout ratio of around 40%. That means 40% of the company’s cash flow is paid out to its stockholders as a dividend. That’s a pretty reasonable ratio and a sign that it either hasn’t had earnings or cost containment problems and/or isn’t giving the farm away.

Dominion Resources, on the other hand, has a payout ratio in the 84% area – very high and not a good sign. And on a percentage basis, its dividend actually pays less than the one offered by AES – 3.71% from Dominion and 4.8% from AES.

It doesn’t take a chartered financial analyst to understand that giving away 84% of the money coming in isn’t a great idea and, long term, will affect the well-being of any corporation.

The other negative to be aware of is regulatory issues. The Environmental Protection Agency (EPA) has become an issue for all electric utilities in the past few years. Adhering to the EPA’s demands can be costly and can cause major problems for electric generators.

And don’t rule out a utility because it reports only 1% or 2% growth. These are income investments that over time will return some growth, but grow at much slower rates than what most of us are accustomed to looking for in the equity market.

If you check on the usual earnings and revenue numbers we research for all stocks, make sure they aren’t falling off a cliff – and avoid any company that appears to be giving away too much.

Utilities can be a very good income source with very few problems.

Still not convinced? Think about how many things we have to plug in and charge every day that didn’t even exist 25 years ago.

This is a growing market with localized monopolies. Utility companies are real sticklers about getting paid regularly. No check, no power! Not many receivables go beyond 60 days in their business. That’s one of their many built-in safety factors.

No, they aren’t the gods of the income world they once were, but they still offer solid and growing dividends. And, as a bonus, they won’t keep you up all night with worry.

Everyone still has to have power and, in virtually all situations, there is only one source.