That’s great… considering the best is yet to come.

Analysts are having trouble with something Google calls “other bets” and the fact that those investments cost the company a whopping $3.5 billion in losses.

A lot of individual investors, meanwhile, find it hard to imagine GOOGL stock going too much higher, let alone a lot higher.

[ad#Google Adsense 336×280-IA]Both groups are missing something really critical that we talk about all the time.

Something that’s worth at least 50% to the upside.

And that’s your entry.

When $3 Billion in the Red Is a Good Thing

As you know, I’ve made the case for several years now that the real value when it comes to Google/Alphabet is in the company’s component businesses. The stuff they call “other bets.”

In a nutshell it’s stuff like high-speed Internet and net-smart ho-78me devices, self-driving cars, and even robotics. And it doesn’t appear to be profitable.

According to the company, “other bets” generated under $500 million in sales last year but cost the company more than $3.5 billion in losses.

Naturally, the analysts are shaking their heads because that’s “not the way you want to do things,” but I beg to differ.

Most of the never before released “other bet” numbers are related to two key areas called Fiber and Verily. The former is Google’s high-speed Internet service while the latter is Google’s life sciences division.

It’s natural and, more importantly, expected that the company is going to spend a lot of money putting in fiber to handle high-speed data requirements in major urban areas. And it’s totally normal to expect that the company has to dump a ton of money into life sciences to really make a difference.

The question, as always, is not how much these kinds of breakthrough investments cost to get off the ground, but how much they’re going to generate when customers begin using them a few years from now.

The track record is fabulous when you think about it.

Those are all services that would have been classified as “other bets” when the company started. Now they generate $21.2 billion a year. Smart bets like these have helped quarterly earnings growth hit 45.30% year over year.

What hasn’t dawned on folks is that the “other bets” they’re poo-hooing are growing revenue faster than Google’s more established “bets.”

Case in point, “other bets” revenue jumped 37% year over year in contrast to a 23.2% growth in Google’s overall operating income. 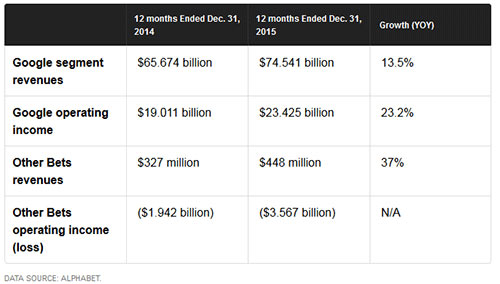 Remember, Google made the move to Alphabet specifically to provide transparency into its other operations. The fact that analysts don’t understand what the company is telling them is their problem… and your opportunity.

Down the road, there are plenty of “other bets” that are going to get spun off. And if you own shares now, that’ll be to your advantage because you’ll get shares in the new ventures as they grow.

My point is that this is a “one decision = many benefits stock,” meaning you’ve only got to decide to understand it once, then buy it.

Some people gripe that at $780 a share, it’s too expensive. Yet, there’s no reason you can’t buy a couple of shares at a time and tuck them away for a rainy day.

Incidentally, people had the same doubts about a tiny company called Berkshire Hathaway in 1980 when it debuted at $290 a share – which, according to the CPI inflation calculator, would be the equivalent of paying $834 per share in 2016. Tuesday it closed at $189,902 a share.

You can count the number of tech companies growing with this kind of pedigree on one hand and still have fingers left over.

This is not a company that’s going to chicken out if the going gets tough.

Besides, Alphabet could split at any time and that will create another rush of liquidity by allowing a fresh round of investment that boosts your shares still further.

It’s not too late to snap up a few shares.