When you see a stock yielding 25%, your first instinct should not be to say, “That’s a great yield!” Instead, you should think, “There’s no way that’s sustainable.”

Of course, in today’s market, particularly in the energy sector, yields have gone sky-high because stock prices have crashed.

[ad#Google Adsense 336×280-IA]In the case of CVR Refining (NYSE: CVRR), a Sugar Land, Texas-based oil refiner, the stock price has fallen 29% from its highs in October.

But even at the high, today’s dividend would yield nearly 18%, which is a head-scratcher in the current environment.

Looking back at the third quarter results, which were reported in November, doesn’t give me a lot of confidence.

Sales through the first nine months of the year were down 40%.

Surprisingly, cash available for distribution, which is what the dividend is based on, rose to $406 million through the first three quarters, from $367 million. That was mainly because of the sharp decline in the cost of products sold (i.e., oil). The company’s business slowed down, but its input costs plummeted.

CVR has 147.6 million shares outstanding. Dividing the cash available for distribution by the number of shares outstanding gives us $2.75 per share, which is exactly how much the company has returned to shareholders in the form of a dividend so far this year.

Last year at this time it had also paid out 100% of its cash available for distribution.

It’s safe to assume that should CVR’s cash available for distribution decline, so will the dividend.

And next year, earnings before interest, taxes, depreciation and amortization (EBITDA) is projected to fall 17%. EBITDA is similar to cash flow. If it slides, it will be difficult for the company’s cash available for distribution to grow.

The other reason you can assume CVR’s dividend will fall is because the way the company is set up, it’s practically guaranteed.

You can see from the chart below that CVR’s dividend payout is all over the place. 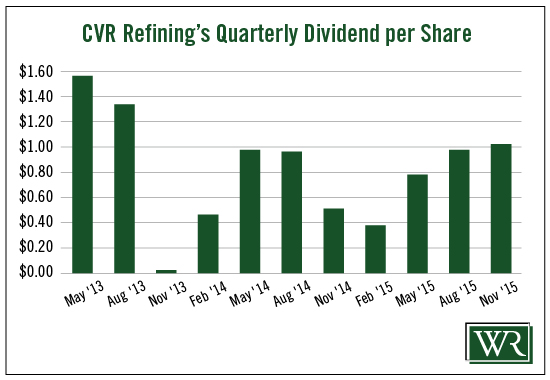 So the likelihood of the company’s dividend going down at some point in the future is extremely high.

You’ve got an energy company with an expected decline in cash flow next year and one that admittedly has a variable dividend.

At some point in the future, the dividend will be cut.