Gold has had a terrific run over the past month.

The precious metal is up $70 per ounce since mid-December. And if you’ve been following my advice here in Growth Stock Wire, you’ve had two chances to profit off of it.

[ad#Google Adsense 336×280-IA]I recommended buying gold [earlier this month] to take advantage of the seasonal strength that typically occurs between December 18 and January 6.

That trade was good for a gain of almost $50 per ounce.

Then, two weeks ago, after gold had pulled back and was testing the support of its moving average lines, I recommended buying it again because the technical condition looked bullish. Gold is up about $40 per ounce since that trade.

To be clear, I’m not suggesting you should sell your longer-term gold holdings – the stuff you bought to protect yourself against a drop in the dollar, an economic collapse, or the end of the world as we know it.

I like gold for the long term. Heck, I like it for the intermediate term, too. I think it will end 2016 much higher than where it is right now. But for the short term, as a trader, it’s time to sell. 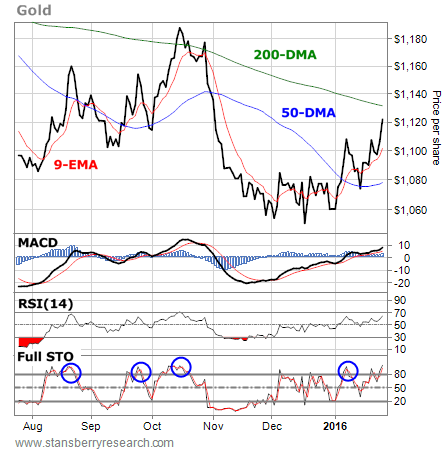 Gold is approaching its 200-day moving average (DMA), the green line on the chart. That’s a natural resistance level, and we shouldn’t expect the metal to rally above that resistance on the first attempt.

After this week’s solid move higher, gold is a bit overbought and extended above both its nine-day exponential moving average (EMA) – the red line – and its 50-DMA, the blue line. The action should be choppy for a bit up here and give the moving averages a chance to catch up to the price of gold. That would create a better-looking setup for gold to attempt to breakout above its 200-DMA a few weeks from now.

We’ve seen this condition four previous times over the past six months. Each time marked a short-term top in the price of gold. The metal reversed and fell back toward its 50-DMA (or lower).

Similar action this time would mean a drop of about $40 an ounce from Tuesday’s closing price. So if you bought gold two weeks ago based on my advice, you should consider taking profits as the metal approaches its 200-DMA.

We’ll look to get back into the trade on any move back down toward the 50-DMA over the next few weeks.