“Bravery is the capacity to perform properly even when scared half to death.” – Omar Bradley

To say the markets have a had a rough start to 2016 is like saying the playoff game between the Arizona Cardinals and Green Bay Packers Saturday was an entertaining match up.

It is damning with faint praise or in the former’s case not acknowledging the fear that has gripped the markets in the opening weeks of 2016.

[ad#Google Adsense 336×280-IA]The S&P 500 is already down some 8% year-to-date and the NASDAQ has dropped more than 10% in the worst opening two weeks to start the year in the stock market’s long history.

Many sectors are doing much worse than the main indices. Energy and commodity stocks have corrected more than 60% since oil began its long painful decline in the summer of 2014.

Those pullbacks have accelerated their declines in early 2016 with major miners like Anglo American selling at all-time lows. There is also talk about some major bankruptcies in these names if commodity prices continue to remain in the doldrums in coming years.

Not as badly as hurt, but still in “official” bear market territory are myriad other markets and sectors. These include Europe and China as well as domestic small cap stocks, high yield bonds, biotech, and transports to name a few.

In short, it is one ugly market that some investors feared might be a replay of the 2008/2009 debacle.

My regular readers know I was far from sanguine going into the New Year and had built up my cash allocation in my portfolio to 30% as 2015 came to a close. However, as much as a skeptic as I am I don’t believe this is a 2008 scenario.

It feels more like 2011 when events in Greece rocked our markets temporarily or the Asian financial crisis of the late 90s. The banking system is on much firmer footing than it was in 2008.

In addition, banks have much lower exposure to the energy sector than they did to the mortgage market prior to the financial crisis. In addition, job growth remains strong as does the domestic auto and housing markets.

Given that outlook, I have been slowly putting my “dry powder” to work during the big decline to begin 2016. I am finding some great long-term values in both the biotech and pharma sectors.

Large cap biotech stocks overall sport their cheapest valuations since 2011 and some of the big pharmas are in the same boat. These firms should also be able to churn out both revenue and earnings growth this year and beyond despite the extremely challenging current global backdrop. Here are a few core positions I have been adding to of late. 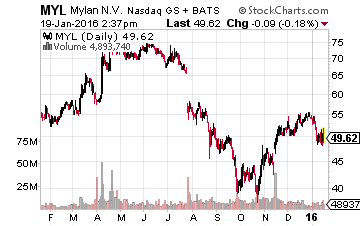 Less than a year ago drug giant Teva Pharmaceuticals (NASDAQ: TEVA) was willing to purchase its competitor for north of $80.00 a share. 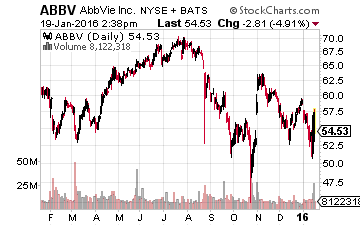 The stock is cheap, trading right at 10 times forward earnings, a significant discount to the overall market.

In the same boat is AbbVie (NYSE: ABBV), who has similar valuations combined with sharper earnings growth and a four percent dividend yield.

Not surprisingly, the stock was one of the few on the board that rose in the down market last week. 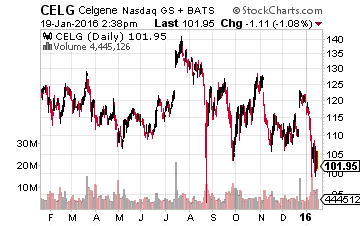 After posting a better than 30% increase in earnings per share in FY2015, the consensus has profits rising 15% to 20% in FY2016. The stock is way cheap at under 12 times forward earnings.

Stepping a bit out on the risk curve, Celgene (NASDAQ: CELG) looks like a buy here after the shares have dropped some $35.00 a share from recent highs and go for just over $100.00 a share.

This biotech juggernaut should post earnings gains of 20% annually or better over the next several years. Most analysts have it pegged for between $11.00 to $12.00 a share in earnings power by FY2019 thanks to its blockbuster blood cancer drug Revlimid and a deep and evolving pipeline.

The stock currently sells for 18 times forward earnings, a slight but warranted premium to the overall market multiple.

Finally, we have Gilead Sciences (NASDAQ: GILD) which continues to be one of the cheapest large cap growth plays in the market.

The company delivered 50% profit growth in 2015 but investors are overly worried about increasing competition in the hepatitis C space. Gilead is the process of upgrading its HIV product portfolio which should ensure it also remains the market share leader in this lucrative franchise for years to come.

The company has a rock solid balance sheet and should post almost $15 billion in free cash flow in 2016. 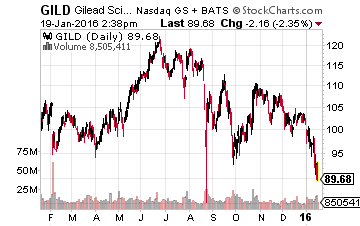 The company should boost its dividend by at least 20% this year and a significant accretive purchase cannot be ruled out given Gilead’s firepower and the values created by the bear market in biotech.

More large development collaboration deals like the one Gilead recently did with Galapagos (NASDAQ: GLPG) also seem likely. The shares are too cheap at under eight times earnings and the shares provide a 1.8% dividend yield as well.

All of the selections profiled above are worthy of accumulation by the intrepid investor who has the conviction that this is not 2008 and has “ammo” to deploy in this rocky market to begin 2016.