At times like the present, one question inevitably rises to the very top of the heap…

For them, the markets are like a one-way street to financial hell. Lacking any sort of cohesive plan, they lurch from one “investment” to another only to doom themselves to subpar returns.

Fortunately, you’re not among them.

[ad#Google Adsense 336×280-IA]As a Money Morning Member, you have a tremendous advantage, especially on days like today, when the Dow Jones Industrial Average plummets.

By your actions you have separated yourself from the proverbial herd.

And, most importantly, you have a plan, a focus, and an objective – to build Total Wealth no matter what the markets throw your way next.

So let’s tackle that question with an answer that is as powerful as it is simple.

And, while we’re at it, let’s highlight a recommendation that’s uniquely suited for today’s chaotic markets.

Never Start with What You Want to Make

Believe it or not, professional traders don’t wake up in the morning and think about how much money they’re going to make like everybody thinks. Instead, they roll out of bed wondering what could cause them to lose money and how they’re going to avoid it.

Because they know – like we do – risk is where you start. How much money you make is a function of what you don’t lose in the first place.

Never forget something we’ve talked about many times – the markets have an upward bias.

In fact, the current decline is already longer than half the length of the average bear market since 1900. That means much of the damage everyone fears could get worse may already be in the history books, according to Ned Davis Research data as reported by MarketWatch.

I don’t disagree. Stock market corrections tend to end a whole lot quicker and more dramatically than most people expect. 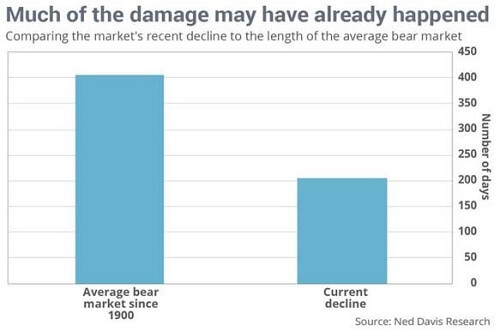 That means the most appropriate question today is not should I sell, which is what most people think. But, rather, how do I handle what happens in the meantime?

By putting risk management first – above all other considerations.

Do so and the returns will come – even on days like today when the markets are getting carried out feet first.

Right now that means doing the things we talk about all the time:

I know I risk sounding like a broken record, but hang in there. There is a method to the madness.

The strongest investments are always companies backed by trillions of dollars in spending that no government can screw up, that central bankers cannot derail, and that the world can’t live without.

In good markets and bad, these are the companies that take off like rockets when the markets are healthy, and the ones that provide unparalleled stability when they’re not.

It’s worth noting that the company continued to increase its dividend throughout the entire Financial Crisis. So income investors loved it, too.

It’s easy to be emotional when the headlines get rolling and you’re being bombarded by terrifying messages from every angle – your friends, your phone, your tablet, your computer, and even the newspapers, as quaint as those seem these days.

It’s not that you don’t want to be logical. Rather, you can’t. Your brain simply isn’t wired that way. You have to train it.

The average investor used to go through one or perhaps two serious downturns during his or her investing lifetime. Then, following the dot-bomb crash of 2000, things sped up.

The Fed started goosing things, international trade accelerated, and derivatives came on the scene, as did computerization. Current investors have watched their 401Ks get turned into 201Ks twice in the last 16 years. It’s normal to fear this is happening again.

This is where most investors go off the rails and why you won’t.

Over the last 34 years, I’ve studied, experienced, and lived through thousands of ups and downs in everything from individual stocks to currencies to commodities and, yes, the broader markets themselves. Consequently, I’ve become proficient at navigating them. Not perfect – that’s different.

This is due to something social scientists call “chunking.” Your brain unconsciously begins to organize subtle patterns into coherent blocks of information. That, in turn, helps you build a larger and larger body of knowledge and – here’s the key – rational responses to extreme stimuli like the fear of loss.

The U.S. Navy SEALs take this concept to an entirely new level, which is why they train so hard that actual combat seems easy despite being one of the most chaotic, frightening things anybody will ever encounter.

Over time, every SEAL becomes proficient under a wide variety of scenarios and situations that would kill the average individual.

That’s why I continually come back to key concepts like our Unstoppable Trends, “must have” companies, and specific investment tactics.

I want you to be financially proficient – no matter what the markets dish out next.

That way you will not panic, nor will you give in. Instead, you’ll seize every opportunity the markets hand to you when other people are giving in to their emotions.

This Recommendation Is Ideally Suited for Today’s Markets

Now for the fun stuff.

When I began today’s column, I promised you that a recommendation that’s ideally suited for today’s market madness: Coca-Cola Co. (NYSE: KO).

The company makes a wide variety fizzy favorites but now has branched into everything from tea and coffee to milk and even sports drinks.

I’ve followed the company for some time but think recent market turmoil has handed you an amazing opportunity.

Especially in bad markets when cash counts and you need every advantage you can get.