It was tough for an investor to earn returns in 2015.

In an article titled, “The Year Nothing Worked,” Bloomberg reports that… “Since 1995, practically every year has seen some asset deliver returns exceeding 10%.” You just had to figure out what to buy. Last year, though, wasn’t so great.

This could add up to fear about where stock markets are headed next. But as I’ve shown you, fear can ruin your financial future. Instead, we do rationality and preparation.

[ad#Google Adsense 336×280-IA]It’s perfectly rational to think that 2016 could be a sideways or slightly down year.

To prepare for that, it’s important to up your defensive positions.

And right now, there’s one group of stocks that should be at the top of your list…

For decades, no stocks were considered safer than utility stocks.

Utilities are public companies that provide today’s modern necessities – like electricity, water, and gas – in a particular area.

When these utilities started to be built back in the 1920s, a dilemma arose.

First, given the geographic nature of utilities, it doesn’t make sense to have two competing companies in a given city. Can you imagine the mess that two overlapping water systems or power-line networks would cause?

But if you have just one utility, it’s a monopoly. What’s to stop the only water company in town from charging $100 a gallon?

Instead, utilities became highly regulated. They are profit-seeking private businesses, but the profits they can seek are limited.

In the basic arrangement, state utility regulators approve projects that utility companies want to build and the prices they want to charge with a “fair” rate of return in mind. In general, a utility gets to earn about 10% on equity, but this varies by what service it provides and what state it’s in.

So the upside to a utility is capped by the government, but there’s also less downside. Utility companies have hundreds of thousands of locked-in customers who count the product as a basic necessity.

This sort of arrangement made utilities a defensive play for years. Since there wasn’t much growth, investors valued utility stocks at a price-to-earnings (P/E) multiple less than the broader stock market. Utilities typically paid a high dividend yield from their consistent cash flows.

Utility stocks didn’t make anyone rich quick, but they helped many people sleep well at night.

Then, things changed. After the 2008/2009 financial crisis, two things happened…

Second, investors were a little more cautious. Many decided that defensive stocks looked more attractive after the fear the crisis had caused.

Investors piled into utility stocks. Rather than growing slowly, prices soared. From 2010 through 2012, utility stocks actually kept pace with the broader stock market. 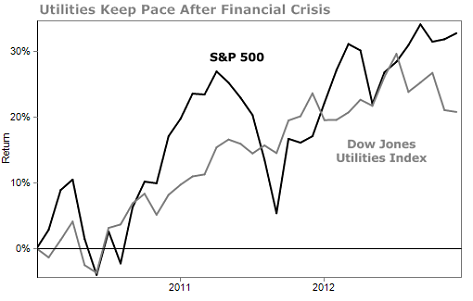 And the valuations assigned to them rose as well.

For most of history, the P/E ratio of stocks was above that of utilities. Then utilities caught up. You’ll notice that in the last few months, the relationship has returned to normal. 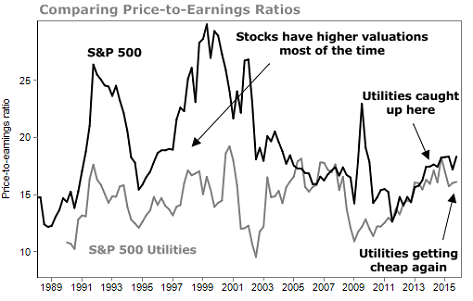 While utility stocks used to pay 4%-5% a year in dividends, investors bid up the prices until they paid only 3% or so.

In 2008, we added a position in utility stocks – the Utilities Select Sector SPDR Fund (XLU) – to our Retirement Millionaire model portfolio, thinking it would be a solid dividend provider that we could hold forever. But with utility stocks posting such big gains and high valuations, we sold it in November 2014 for a 97.4% gain (with dividends).

Shortly after, investors fell out of love with utility stocks… 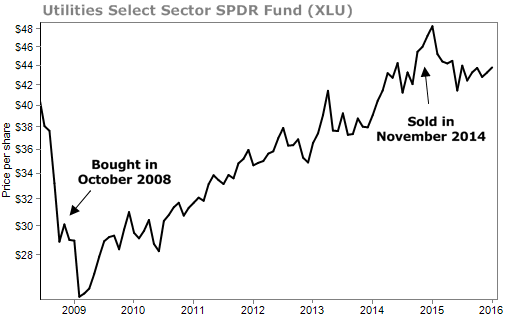 When investors started to expect interest rates to rise, they were less interested in utility stocks… sending shares down. But interest rates didn’t actually rise until recently. Now that the Fed has finally raised interest rates, the broader market hasn’t reacted.

In other words, utilities fell because investors were “looking ahead” at interest rates. But now the future looks “priced in.”

It means utility stocks now look like a better deal than they have been in nearly a decade… making them a great defensive play with steady businesses and generous dividends.