2016 has gotten off to an ominous start for investors.

The opening trading week was the weakest one to start a year in the history of the market.

There have been numerous sources of turmoil that have quickly put most major indices in official “correction” mode to start the New Year.

[ad#Google Adsense 336×280-IA]China’s market seems to be getting away from authorities who have ham-handedly tried to arrest stocks’ declines.

The proxy war in the Middle East between Saudi Arabia and Iran seems to be escalating by the minute and crude oil is at twelve-year lows.

It definitely feels like it is going to be a stock pickers’ market in 2016 and what an investor avoids putting in their portfolio could be just as important as the selections that do make to that portfolio.

There are plenty of areas I think investors would be best advised staying away from as we start into what looks to be a treacherous year for the markets.

I have been and will remain completely out of both the energy and commodity sectors as well as commodity based emerging economies like Brazil and Russia. There are going to be myriad bankruptcies among the energy producers and miners if prices stay at current levels. Until we get some signs that global growth is increasing, the strength of the dollar ebbs, and we get a “washout” to establish a firm bottom in these complexes, it is best to avoid everything contained within. 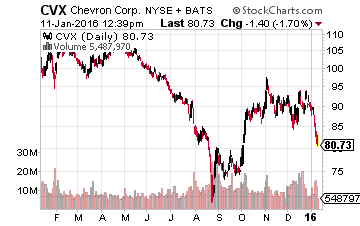 This includes the major energy stocks like Chevron (NYSE: CVX) and ExxonMobil (NYSE: XOM) which have attracted a lot of “flight to safety” money from investors who still want to benefit from any sort of rally in the price of crude.

Both oil majors have slashed capital expenditures severely over the past year but still saw huge earnings declines in 2015.

Both companies are doing anything to maintain their dividend payouts regardless of the actions they need to take.

This means they are not picking up assets on the cheap and in the case of Chevron their earnings are not even covering their dividend payouts currently.

Ironically, thanks to the safety trade, both stocks are trading significantly above where they were during the volatility in the markets this summer when crude was selling for a higher price than it is currently. Both of these oil majors are susceptible to slides if oil stays at these levels.

I would also be wary of any industrial or manufacturing firm that depends significantly on overseas demand.

Global growth came in at its lowest levels since 2009 in the just completed year and the IMF started off the New Year by slashing their projections for worldwide economic activity in 2016.

In addition, as the Federal Reserve raises interest rates the Japanese, Europeans and Chinese are pumping liquidity into their markets; the dollar will continue to strengthen.

This will continue to crimp earnings in companies that derive the majority of their revenue from overseas and are key reason profits within the S&P 500 declined year-over-year in 2015. I would be especially careful with manufacturing concerns depending on orders for mining equipment which have dried up completely. 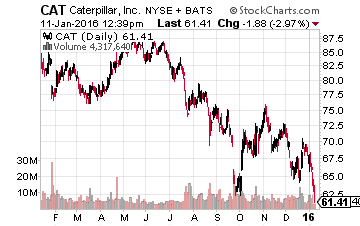 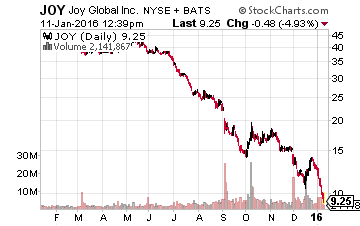 This means I would continue to avoid the likes of Caterpillar (NYSE: CAT) and Joy Global (NYSE: JOY) despite their significant declines in 2015.

They feel like value traps here and earnings should continue to decline in 2016.

I would also leave General Electric (NYSE: GE) which had a very solid 2015 off my shopping list.

The firm has done a great job over the past couple of years turning itself into a more pure-play industrial concern just as worldwide demand continues to slide into near recessionary levels.

Of course, under the current CEO timing has never been a strength of venerable GE. Previously they had transformed itself into a more pure play financial firm just before the financial crisis. 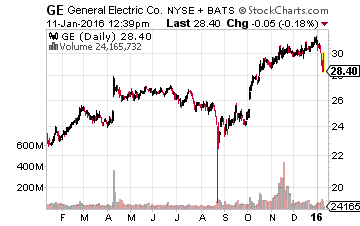 Finally, I would avoid some of the highflyers that did very well in 2015 but sport sky high multiples.

Netflix (NASDAQ: NFLX) is the poster child for this sort of stock. 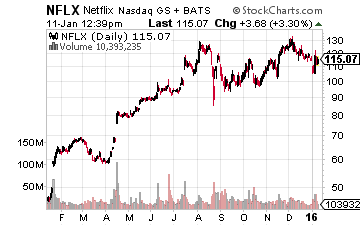 It has captured the imagination of momentum investors as its rolls out to some 200 countries across the globe.

Unfortunately, this subscriber growth has not translated into earnings.

The company is tracking earnings of a quarter a share in FY2015, less than half of the minuscule profits it booked in FY2014.

Profits should barely grow in FY2016 as the company rolls out to more international countries. This means the stock is priced at some 500 times forward earnings.

In addition, the company is facing increasing competition from YouTube and Amazon Prime; their content costs continue to march higher too. It will be hard pressed to raise prices significantly so it is hard to see how the company increases margins. At some point, any hiccup in its “story” could cause a huge drop in its stock price which has happened many times in its history as a public company.

That is a quick list of what I would avoid as we begin 2016. For my own portfolio, I am mainly sticking to high-quality large cap growth stocks with solid balance sheets, reasonable valuations, and solid dividends along with a good dose of cash as we enter into what looks like another challenging year for investors.