Everyone loves a good sale.

But whereas many people might think of apparel or electronics when they hear the word “sale”, I think of stocks.

Just like someone might salivate at the thought of buying a 75-inch TV when it’s marked down by 20%, I truly look forward to buying high-quality dividend growth stocks when they’re equally marked down.

The first is that one always wants to invest in high-quality stocks.

I prefer dividend growth stocks like those you’ll find on David Fish’s Dividend Champions, Contenders, and Challengers list – a compilation of more than 700 US-listed stocks that have all increased their dividends for at least the last five consecutive years.

I personally invest in these stocks because dividends are a portion of shareholders’ profit and, in addition, dividends have historically provided a substantial portion of investors’ long-term total returns.

Moreover, research indicates that, over the long haul, dividend growers and initiators outperform all other stocks, especially stocks that don’t pay dividends at all.

If a business is good enough to generate rising profit over the long term, I deserve my fair share of that growing cash flow as a shareholder.

On the other hand, if a business isn’t good enough to generate rising profit over the long term, then I’m not going to want to invest in the first place. Why would someone want to invest in a company that can’t produce growing profit?

Dividends are basically the “proof” in the profit pudding.

A company can put together marketing materials and fancy annual reports, but nothing gets me as excited about growing profit as tangible cash flow that’s also growing.

So when one mentions high-quality stocks, I think of solid demonstrated top-line and bottom-line growth over a decade or more, responsible leverage, robust profitability, and, perhaps most importantly, a lengthy track record of growing dividends.

And all of that usually comes from a high-quality company (stock, after all, is ownership in real businesses) that sells products and/or services that consumers and/or other companies want/need.

But there’s another key aspect to it all. After all, even the best company isn’t worth paying any price for.

That other aspect is paying attention to value and buying when a stock appears to be priced notably below its estimated fair value. One wants to buy a high-quality dividend growth stock precisely when it’s undervalued, or “on sale”.

The reasons are simple and threefold:

All else equal, a stock’s yield is higher when it’s price is lower.

A higher yield means more ongoing income in your pocket along with higher potential total return, since yield is a major component to total return, with the other component being capital gains.

Speaking of that other component, your potential long-term capital gains are obviously higher when you pay a lower price.

If a stock is worth $50 and you pay $50, you’re not leaving yourself much room for upside.

Paying $30 for that same stock, however, means your long-term upshot could be that $20 between the price you paid and what it’s likely worth, in addition to additional upside for as long as you own the stock and the company remains increasingly profitable.

Paying $50 for a stock likely worth $50 means you’re putting $50 at risk for every one share you buy.

Conversely, paying $30 means you have $20 less per share on the table, at risk.

Furthermore, that $20 less per share you paid allows for a huge margin of safety, just in case your reasonable estimate is off or the company doesn’t perform as expected moving forward.

As you can see, it literally “pays dividends” to be mindful of valuation and buy undervalued high-quality dividend growth stocks when opportunities present themselves.

What’s even better is that there are methodologies that exist to essentially take a lot of work off your hands, making it much easier than ever before to value stocks, which is necessary.

After all, if you don’t know how much something is worth, how can you know what to pay?

How would you know if a stock is a “good deal” or not if you don’t have the context that value provides?

Fortunately, a methodology is available right here for you readers, put together by fellow contributor and dividend growth investor Dave Van Knapp. This is specifically designed for the high-quality dividend growth stocks that can reward shareholders so well over longer periods of time.

With all of that in mind, let’s take a look at one such high-quality dividend growth stock that does appear to be meaningfully undervalued right now.

Corning Incorporated (GLW) is the world’s leading designer and manufacturer of specialty glass and ceramic substrates.

This company is just a monster in its industry, an industry which, by the way, is highly consolidated with just three major players.

Corning manufactures the glass you see on LCD televisions and the optics you don’t see in fiber optic cables. Their world-class manufacturing process gives it a huge competitive advantage, which has in turned led to wonderful profitability.

With just five consecutive years of dividend raises under their belt, there’s a lot to be desired there.

But the rest of the dividend metrics are pretty outstanding.

The dividend growth rate over that five-year period stands at 19.1%.

So while inflation has practically stood still over the last few years, Corning’s shareholders have seen their purchasing power explode.

Even with that explosive dividend growth, the company still maintains a very modest payout ratio of just 32.4%.

That means even absent much bottom-line growth, the dividend could continue to grow nicely for the foreseeable future. Said another way, I think it’s highly likely that Corning continues to grow its dividend at a significant rate over the near term and possibly beyond.

And then there’s the yield of 2.81%, which is obviously well in excess of the broader market. In addition, that yield is more than 50 basis points higher than the stock’s five-year average yield of 2.2%.

You can see a nice spread there, meaning investors today are buying into a much higher yield than what has typically been offered over the last five years.

Low payout ratio, appealing yield, huge dividend growth rate. It’s all there. And it seems like that rather short track record for dividend raises is likely to become more impressive in time.

I think their growth trajectory – looking at both past growth and future projections – leads one to believe that the firm has what it takes where dividend sustainability and growth are concerned.

Looking at this growth trajectory will also allow us to reasonably estimate the firm’s intrinsic value. We’ll take a look at the last ten years first, which tends to smooth out economic cycles. We’ll then look at the forecast for future near-term growth.

The bottom line has fared similarly, though it appears much better due to the fact that FY 2005 marked a turning point for Corning where they were able to stem recurring losses and turn the tide toward incrementally increasing profit.

However, it’s been anything but secular and shorter periods of time can reveal much less impressive growth rates. Nonetheless, the company’s long-term growth appears to be intact.

S&P Capital IQ is calling for 10% compound annual growth for Corning’s EPS over the next three years, citing aggressive share repurchases (the outstanding share count is down by about 10% over the last five years) and increased production efficiency following the recent sizable acquisition of Samsung Corning Precision Materials.

Another area of this company that’s really fantastic is the balance sheet.

The company maintains plenty of financial flexibility via its long-term debt/equity ratio of 0.17 and interest coverage ratio of 30.

Unlike many other firms across just about every industry out there, Corning’s balance sheet has actually improved over the last decade, which is pretty impressive.

But if there’s anything that’s impressive about this business, it’s the profitability metrics.

It’s not terribly often that you’ll see margins so high, but Corning has spent the last decade improving its process to the point where it can produce better glass at a lower cost. And with a largely consolidated industry, it seems unlikely there’ll be much pressure on these margins absent some kind of technological change that requires massive investment.

All in all, there’s plenty to like about Corning. You’ve got a world leader with sky-high margins, providing products that are obviously in demand.

Both past and future growth is very solid, leading one to assume that future dividend raises should come in spades. The dividend track record is a bit short, but I think the firm’s other dividend metrics make up for much of that.

On top of it all, the stock appears modestly priced right now…

The stock trades hands for a P/E ratio of 11.54. Not many companies so dominant in their respective industries trade for a valuation like that. That P/E ratio is almost half that of the broader market. The industry average P/E ratio is over 15, so there’s a clear disconnect here.

Seems to be cheap. But what’s an appropriate price to pay? What’s the likely intrinsic value?

I valued shares using a dividend discount model analysis with a 10% discount rate and a 7.5% long-term dividend growth rate. That growth rate is on the upper end of what I normally allow for, but Corning’s demonstrated dividend growth over the last few years combined with their aggressive share repurchases and modest payout ratio allows for that, in my view. The DDM analysis gives me a fair value of $20.64.

This dividend growth stock definitely appears to be undervalued. And I’m not the only one who believes that…

Morningstar rates GLW as a 3-star stock, with a fair value estimate of $21.00.

I came in a little light, as I oftentimes do. I guess I just prefer to generally aim for a conservative mark. Nonetheless, the estimates for this stock’s fair value range from noteworthy to significant. Averaging these numbers out gives us a final fair value of $21.71, which I believe is likely to be very close to the stock’s worth. That would also mean this stock is potentially 27% undervalued. 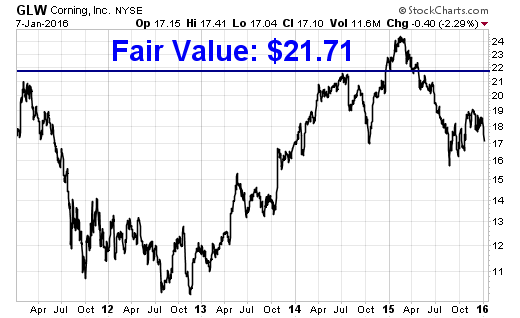 Bottom line: Corning Incorporated (GLW) is a world leader in its industry, with manufacturing proficiency that leads to competitive advantages and incredible margins. The track record for consecutive dividend raises is short, but there’s a lot of potential here. The yield is much higher than its recent historical average and there appears to be 27% upside on top of that. If this is an industry that excites you, Corning could be an outstanding long-term investment at today’s price.