One of the great questions for the markets and investors is which way crude oil will head in the New Year. This has a lot of ramifications for investors as well as for the global economy. The collapse in oil, natural gas, and other commodities has caused yields and defaults in the junk bond market to spike recently.

If energy prices stay at these low levels this volatility will increase. Particularly as we get later into 2016 when additional forward production hedges made when crude was over $100 a barrel fall off the balance sheets of energy producers.

[ad#Google Adsense 336×280-IA]In addition, the collapse in the energy and commodity sectors are having impacts on sovereign credits and the economies of export dependent nations.

Canada, our largest trading partner, is in recession.

Argentina looks like it is going to default for the 10th time in its history and credit ratings on Brazil, South Africa and other commodity based economies continue to be downgraded with Brazil’s debt being officially in “junk” status.

My answer is I think it is too early to bottom fish. We still have a huge supply glut and the Iranians will be flooding the global oil market once sanctions are lifted. I have also seen too many hedge funds prematurely go into the credit markets and buy the debt of some energy producers at 80 cents on the dollar early in 2015, average down at 60 cents on the dollar on the same debt during the summer and now be in a near state of panic as the debt now trades at 35 to 40 cents on the dollar.

I think the best way to play a rebound in crude, which is a possibility in the second half of 2016, is to buy some of the stocks that have unfairly gone down with the price of crude and have been overly punished like they were the stocks of energy producers. These are companies that get some of their customer demand from the energy sector but still can produce profits even if that demand due to the price of energy stays low for a long time. 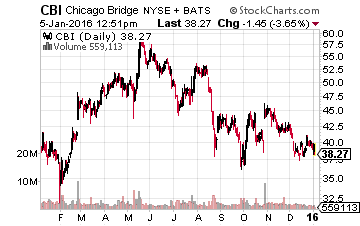 The stock had a poor 2015 because of concerns around cost overruns at one of its projects within its nuclear plant construction business and worries that collapsing energy prices would mean cancellations and a dry up of demand from its business of building LNG plants.

The company recently shed its nuclear build operations removing that overhang from the equation for 2016. In addition, while falling energy prices may mean less LNG work over the long term, it is bolstering other areas of demand such as that for refinery upgrades as well as chemical plant builds in the United States to take advantage of the lowest natural gas prices in the developed world. Natural gas is the primary input for a variety of chemical products.

The company has over $20 billion in order backlog even after getting rid of its nuclear business. This is almost two years’ worth of work and Chicago Bridge & Iron has continued to see a steady stream of new contracts throughout the downturn in the energy markets. The shares currently go for seven times this year’s profit, less than half the overall market multiple. 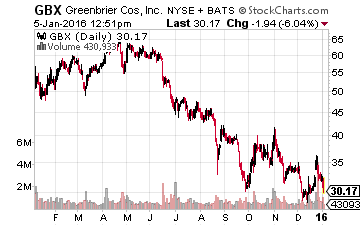 While it is true that demand for rail cars to transport frac sand and crude oil have dried up, the company has approximately seven quarters worth of work with its current order backlog.

Moreover, 80% of that backlog is for other types of rail cars not used within the energy sector such as cars to transport autos, chemicals, and agricultural commodities.

The company keeps winning new orders in these segments and it is important to remember Greenbrier is probably the most efficient player in this space. Before the financial crisis, the company had 13% of the overall market share for rail cars.

It now has roughly a third of the market share and should use the current troubles at competitors’ businesses to increase that further. The company has guided that earnings per share in 2016 will be between $5.65 to $6.15 a share. This is a dirt cheap stock at just under $33.00 a share. 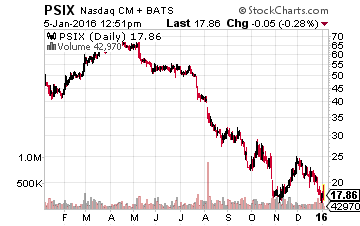 Finally, and on the upper end of the risk/reward scale, we have Power Solutions International (NASDAQ: PSIX).

This is a company that manufactures, distributes, and supports power systems and custom-engineered integrated electrical power generation systems for original equipment manufacturers.

The collapse in demand from the energy sector has been a large headwind to its business and the company has had to reduce guidance a few times in 2015 as a result. Six months ago, analysts had Power Solutions making north of $3.00 a share in profits in 2016. That consensus estimate is now just a $1.00 a share in earnings for FY2016.

However, the company should still see revenues increase in the low teens both in FY2015 and FY2016 and will remain profitable throughout this cycle. The stock is down some 70% from its 52-week highs and now sells for just over $18.00 a share. If the energy sector strengthens at some point in 2016, this should be one of the first stocks that rallies.

Unlike most of the energy producers, these companies should remain solidly profitable in 2016 and beyond despite the collapse in energy prices. They will also rally strongly should conditions in the energy complex improve in 2016. They are the low-risk way to play any coming rebound in crude and natural gas.

Sponsored Link: Small Cap Gems analyst Bret Jensen has identified his top 3 takeover stocks for 2016. With a knack for finding companies on the verge of buyouts – and massive returns for regular investors – Bret’s just released a new report on 3 prime takeover candidates with potential returns of 76%, 100%, even 183%. With the market taking a pause now just may be the time to pick up a few shares. Click here for details on these stocks.