It seems so insignificant, it should be irrelevant…

But the opposite is true…

It’s incredibly important. And chances are you have no idea how crushing it could be to you.

I urge you to share with your family what I share with you today. It’ll be a fun little dinner conversation. They will be shocked. And hopefully that shock will cause them to make a major change – starting today.

Even smart people don’t instantly see it – as I found out yesterday. But as you will see, it’s true.

Let me explain this important thing with a little story…

Yesterday, I spoke in my daughter’s gifted class at school. I was asked to talk about saving and investing.

I started out by holding up a penny… “If you started with a penny and doubled your money every day for a month, how much money would you have at the end of that month?”

The kids started raising their hands. “Two dollars!” one kid said. “Five dollars!!!” another said, louder than the first. 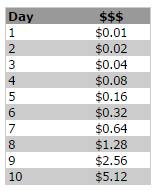 “We’re already at five dollars after 10 days,” I showed them. “So where will we be at the end of the month?”

“Ten dollars,” one kid yelled, clearly not seeing the pattern.

“A hundred dollars!!!” the next one yelled. This was closer… but they had no idea the power of this snowball gathering steam down the hill.

I shared the next 10 days of doubling each penny every day.

I rounded down to $10 to keep nice, even numbers to help the kids see the pattern here… 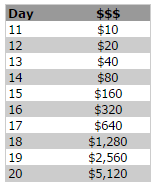 If you look, you’ll see this is the same as the first 10 days – with three zeros added!

“Ten thousand dollars!” one kid yelled. Clearly the pattern still wasn’t sinking in. (And this is the gifted class.) 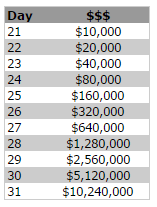 The answer, you will be surprised to learn, is more than $10 million…

If you start with a penny and double it every day for a month, you will end up with more than $10 million. That is the power of compound interest.

Change the example from 30 days to 30 years, and you have a lifetime of savings.

But what if you procrastinate? What if you decide you’ll wait until next year?

What happens if you wait 10 years before you finally start putting small amounts away?

The end result is crushing… Instead of ending up with more than $10 million in this example, you would only end up with $5,120.

I fully realize that these numbers are not realistic. Doubling a penny a day (or every year) is a 100% return every day (or year). That is not going to happen.

But the point is still valid…

It’s easy to procrastinate. You won’t see the negative effects in the short run. But in the long run, the damage could be crushing. For younger readers, these “pennies” saved early on could mean the difference between retiring comfortably or not being able to retire at all.

People don’t get it. They don’t realize the power of compounding.

I urge you to do what I did with my daughter’s class… Ask your family or friends how much money they would have if they started with a penny and doubled what they have every day for a month. Nobody will come close.

It’s a great story to remind them – and you – why you need to make the extra effort, starting today, to put those pennies away…