Oil drillers have slashed billions of dollars in spending and laid off tens of thousands of employees. About 15 months ago, there were nearly 2,000 drilling rigs operating in the oil fields of the U.S. Today, according to the Baker Hughes North American Rig Count data, there are just 698.

[ad#Google Adsense 336×280-IA]That means drilling companies have cut 64% of their drilling operations around the U.S.

You have to go back to 1999 to find that few drill rigs operating.

I was recently in Abilene, Texas looking at one of the premier shale-oil fields in the world… the Permian Basin.

I saw firsthand how few rigs were drilling there.

I also saw rigs stacked in yards all over, as you can see in the picture below. 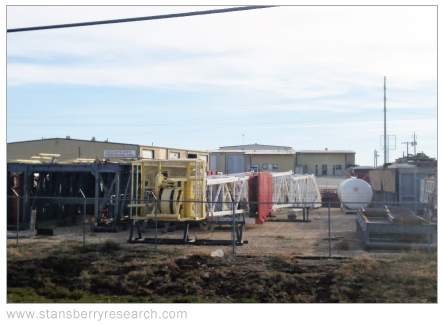 Regular readers know natural resources, like oil, are tremendously cyclical. They go through huge cycles of boom and bust. The key to making big gains in the sector is to buy assets that have been in “bust” mode. Once a resource is left for dead, things often get better and prices eventually boom… along with the share prices of companies in the sector.

We’re not there yet with oil stocks… but we’re getting close.

One of the metrics I use in my Stansberry Resource Report newsletter to monitor one group of oil stocks is the price-to-book (P/B) ratio. P/B is simply a ratio of a company’s market cap divided by the value of its assets, minus liabilities.

If we look at the P/B ratio for oil-services stocks, we can see that we’re nearing a bottom in the sector. For these companies, the P/B ratio represents the value of their iron… drill rigs, frack tanks, pipes, tools, etc… When rigs are operating, the market values them at three, four, or even five times book value. But when they are idle, like today, the market tends to dump them back to almost the cost to buy them.

For the past 35 years, the average P/B ratio of the Thomson Reuters Datastream Oil Service Index, which tracks the major oil-services companies, has been 2.6. In other words, the average value of these stocks is about 2.6 times their book value.

But occasionally, the share prices of these stocks plunge so much that the Index P/B ratio falls to an extreme level. This is only the fifth time in the past 35 years that this has happened. But after each of the previous four times, oil-services stocks returned big gains over the next few years. 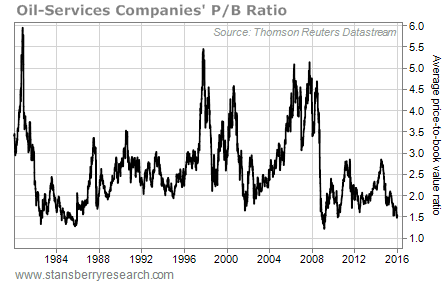 The last time this happened was in March 2009, when the P/B ratio of the Thomson Reuters Datastream Oil Service Index fell to 1.2.

Back then, oil prices had fallen from $145 per barrel in mid-2008 to $34 per barrel in early 2009. Many oil producers decreased their production – meaning they needed less drilling equipment and service crews from oil drillers. Oil-services stocks plunged more than 71% over the same period.

But because oil is tremendously cyclical, the oil price eventually recovered… oil production picked up… and oil-services stocks soared. The Thomson Reuters Datastream Oil Service Index rose 133% from the low in 2009 to its high in 2011.

Oil prices are down more than 67% from their high in June 2014. Many oil producers are cutting production. Oil-services stocks are down an average of 47% since oil prices peaked. And their average P/B ratio is 1.5 today. So we’re near the historic low in P/B value of oil-services stocks.

But eventually, oil prices WILL recover, just like they always do… oil production will pick up… and oil drillers will head higher.

Right now, the trend is still down, but we are getting close. When the trend turns higher, oil-services stocks will be a great place to make big gains. For the market to just go back to average, the Thomson Reuters Datastream Oil Service Index would have to go up 73%.

We’ll wait for now, but things are approaching “can’t get any worse” status. At that point, they’ll have to get better. Keep an eye on the oil-services sector. When the time is right, you could make a lot of money in these stocks.