Many contrarian investors are watching the gold sector closely…

Gold prices are down more than 40% since they peaked in 2011. And many producers are struggling to make money.

According to Bloomberg, half of the North American gold producers with market caps of more than $200 million had negative free cash flow (cash from operations less capital expenditures) over the past year.

But as regular readers know, the natural resource market is tremendously cyclical.

It goes through huge cycles of boom and bust.

The key to making big gains in the sector is to buy assets that have been in “bust” mode.

Once a natural resource is left for dead, things often get better and prices eventually boom… along with the share prices of companies in the sector.

So is it time to buy gold stocks? Not yet…

As my colleague Jeff Clark pointed out [recently], there are reasons to be bullish on gold in the short term. I agree with Jeff, but I’d like to see the price move above its 50-DMA of around $1,100 before making any long-term bets on gold producers.

With terrible sentiment toward the metal and world banks printing massive amounts of money, we’ll see that move happen eventually.

So which stocks should you buy when that happens?

As Matt Badiali showed you in September, to see how healthy a company is in today’s environment, you want to look at its “all-in sustaining costs” (AISC). That shows us just how much money the company needs, per ounce of gold, to operate. It includes mining costs, administrative costs, and exploration costs.

You can then compare this number with the average gold price over the past quarter to get these companies’ current profit margins.

The table below shows 12 major mining companies with their market capitalizations, AISCs, and profit margins. 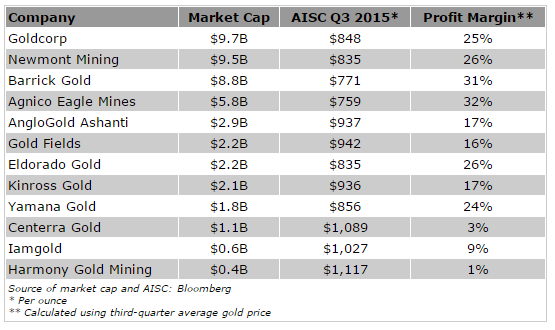 All of these companies have made cuts in an attempt to maintain profits… or in the case of companies like Harmony (HMY) – to survive. Both Harmony and Iamgold (IAG) continue to struggle. Avoid them.

The main reason costs have fallen is that producers have fired employees and cut back on exploration. Producers outside the U.S. have also benefited from the appreciation of the U.S. dollar. You see, they sell gold in dollars, but a big chunk of their costs are not in dollars. Those costs have fallen relative to the strong dollar.

The largest producers are doing the best in this environment. They are the lowest-cost producers. Newmont Mining (NEM) is profitable and has $3 billion in cash to weather any unexpected turbulence. Agnico Eagle (AEM) continues to cut costs. It had the lowest AISC in the third quarter.

However, the price of gold keeps falling. Gold closed Wednesday at $64 less per ounce than the third quarter average. This will continue to hurt producers’ profit margins. While most of the above names can produce profitably at this lower price, we need to see the price stop falling before we act.

To sum up, there are reasons to be hopeful about the gold sector… but don’t buy until the downward trend in the price of gold reverses.