On July 17, China shocked the financial world by disclosing its gold reserves for the first time since 2009.

The People’s Bank of China announced the country has just 1,658 metric tons of gold – or about 53.3 million ounces.

The news sent gold prices down to a five-year low. That can only mean one thing…

China is lying about its gold reserves.

The country is not only buying bullion… It has been scouring the world to buy prized gold assets in the ground.

But according to its latest announcement, China’s gold hoard only grew about 100 metric tons per year (3.2 million ounces). At that rate, it would take the country until 2079 to reach the same level of gold reserves as the U.S.

This is highly unrealistic. China doesn’t want it to take that long. Let me explain…

The country has been importing tons of the precious metal every month. It has also been developing its domestic gold industry. In 2007, it became the world’s largest producer.

China has a $3.7 trillion problem.

Over the last 30 years, China has built a massive economy on its exports. Its companies sell cheap goods to developed economies, like the U.S. and Europe. From 1980 to today, China’s foreign-currency reserves have swollen from $2.5 billion to $3.7 trillion… Now, China has to figure out what to do with all that cash.

Initially, China bought U.S. government bonds. As of June 2015, it held $1.27 trillion in U.S. bonds. But the U.S. dollar is trying to inflate away those debts. So China faces a huge problem. As economist John Maynard Keynes famously said, “If I owe you a pound, I have a problem. If I owe you a million [pounds], the problem is yours.”

If China hangs on to those bonds… it could see their value greatly “inflated away.” But if China tries to dump those bonds, it would flood the market. And the value of those bonds would collapse…

Instead, China has been “safeguarding” the value of those reserves against inflation. That means one thing… buying gold.

China is also buying huge amounts of gold to back its currency, the yuan.

It’s no secret that China has been challenging the U.S. for dominance in the global economic landscape. The country is buying U.S. real estate and businesses, stockpiling Treasurys… and it is buying gold to become the world’s next reserve currency.

According to an April article from Bloomberg:

China became the world’s second-largest economy in 2010 and has stepped up efforts to make the yuan a viable competitor to the dollar. That’s led to speculation the government has stockpiled gold as part of a plan to diversify $3.7 trillion in foreign-exchange reserves…

“If you want to set yourself up as a reserve currency, you may want to have assets on your balance sheet other than other fiat currencies,” Bart Melek, head of commodity strategy at TD Securities, said by phone from Toronto. Gold is “certainly viewed as a viable store of value for an up-and-coming global power,” he said.

In short, China knows it needs a strong currency to join the ranks of the world’s elite powers… one backed by huge amounts of gold. This is why China “fast-tracked” its gold industry and became the world’s largest producer. It’s why it has bought a massive amount of physical gold over the past decade.

From 2009 to 2014, China’s gold mines produced 2,465 metric tons of gold. That’s about 79 million ounces. All the gold went to the Chinese government. But the government said it kept only 25%. The rest must have gone… somewhere else.

And that’s just the domestic gold production. According to “official” data, the country imported hundreds of metric tons of gold every year. From 2011 to 2012, it imported more than 2,000 metric tons. The chart below shows the massive gold hoard China gained from its mines and from its imports: 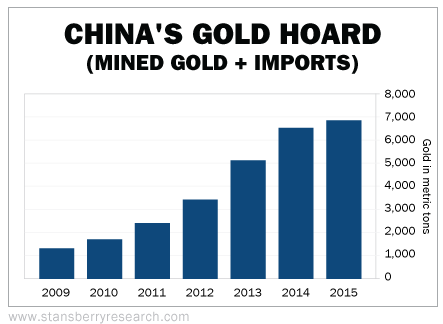 Some of that gold went to China’s public. Its citizens set record demand for gold in 2013, at just more than 1,000 metric tons. But we can add up all the consumer demand for jewelry, coins, and industrial goods since 2009. The total demand, according to data from Thomson Reuters Datastream, comes to about 5,413 metric tons.

That means, even after all the demand, China should have nearly 1,500 metric tons of gold more than it did in 2009 – not just 600 metric tons more.

So where did all that gold go? And why is China hiding it?

The answer to the first question is simple. The gold is still there, sitting in some unofficial vault. That gives the government plausible deniability for its skewed number. The second question – the “why” – becomes far trickier…

I believe China’s gold-reserve number is a fabrication designed to crush the gold price.

If I’m starting to sound like a conspiracy theorist, bear with me…

China was the largest buyer of gold in the market for years. It was often the only bidder after the gold price peaked in 2011.

By announcing an artificial gold-reserve figure, China undercut the idea that it was hoarding gold. As a result, the gold price collapsed, as you can see in the chart below: 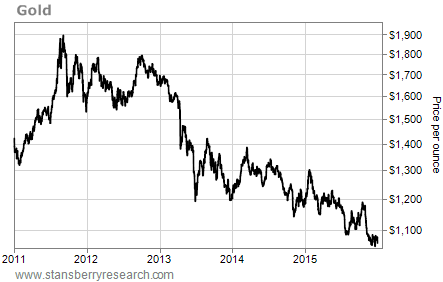 If you were a major gold buyer and had the ability to make the gold price drop, wouldn’t you do it? I would… and that’s what China did. And in the process, it clobbered gold and gold stocks.

This is all part of China’s plan to replace the U.S. dollar as the world’s reserve currency. Understanding this development is critical to protecting your wealth in the years to come…

It’s only a matter of time before China makes its big yuan announcement about the status of its gold reserves… one that could shake up the markets in a huge way. It wouldn’t surprise me if, once the country is done accumulating gold, it does something to make it shoot up in value, just like it pushed it down…