Earlier this month, the U.S. dropped a bombshell on the global oil market.

It will reverse a 40-year-old ban on crude-oil exports.

But this change will result in one clear loser… U.S. oil refiners.

Refiners take crude oil and turn it into products like gasoline, diesel, and fuel oil.

If they can buy oil cheap and sell those products at high prices, they make a lot of money.

Over the past few years, they’ve made LOTS of money. Giant refiners Alon USA Energy (ALJ) and Phillips 66 (PSX) saw earnings before interest, taxes, depreciation, and amortization (EBITDA) rise 67% and 44%, respectively, from 2013 to September 2015.

As longtime readers know, fracking technology has allowed the U.S. to tap into incredible oil reserves in areas like the Eagle Ford and Bakken shales. Annual U.S. crude oil production is up more than 70% since 2008. The glut of oil has pushed the WTI price down. It has fallen more than 70% from its 2008 peak.

This caused Brent to trade at a big premium to WTI. The chart below shows the spread between the price of Brent and WTI over the past 30 years. 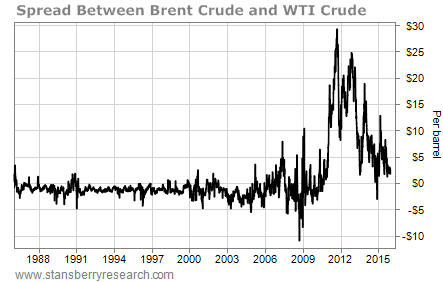 In the refining business, where good profits are measured in single dollars per barrel, a double-digit spread was too good to be true… Refiners couldn’t legally export crude oil from the U.S. So they couldn’t take advantage of this spread directly… But refiners could export refined products like gasoline and diesel fuel.

And refining stocks soared. Shares of Alon and Phillips 66 tripled from 2011 to early 2015.

So U.S. oil refiners will see their profits shrink. This hasn’t happened yet, but it will.

As a result, shares of these companies are starting to fall. Phillips 66 is down more than 10% from its high in November. And Alon is down 33% since its peak in August. That’s a trend I expect to continue.

If you own U.S. refining stocks, take profits today… or at least tighten your stops.