Some of the biggest winners of the oil-price decline have been airlines.

Rising sales and falling operating costs – thanks to low oil prices – have helped push the share prices of airlines higher.

As regular readers know, crude-oil prices have declined 65% since June 2014.

The drop has helped lower the cost of jet fuel (which is derived from crude oil).

This means fuel costs – as a percentage of the total operating expenses of U.S. airlines – have also dropped. You can see this in the table of the major U.S. airlines below.

Falling operating costs and rising sales have increased airlines’ profit margins. You can see this in the table below of these companies’ earnings before interest, taxes, depreciation, and amortization (EBITDA) margins from the third quarters of 2012 and 2015.

This has pushed the share prices of airlines higher. The Dow Jones U.S. Airlines Index – which tracks a basket of airline stocks – is up around 300% over the past three years. That’s some serious growth. It has outperformed the S&P 500 by six times. 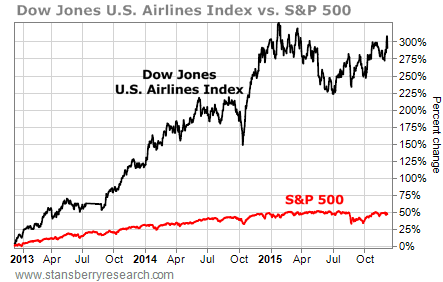 This outperformance might have you thinking of buying airline stocks. But be careful.

Low crude-oil prices have led some airlines to reduce or remove their fuel hedges. Fuel hedges are contracts that airlines enter into to lock in future jet-fuel costs. For example, an airline could lock in today’s low fuel prices for the next year. That way, if there is an uptick in price, it would continue buying fuel at today’s rock-bottom prices. This is what airlines SHOULD be doing right now.

Locking in the cost of jet fuel is important for an airline. It gives management certainty about its future costs. If the company doesn’t know how much it will have to pay for fuel, the best thing that management can do is tell Wall Street analysts what it expects (hopes) will happen.

But many airlines have been gambling that oil prices will remain low… and haven’t been hedging.

American Airlines (AAL), for example, dramatically reduced the amount of fuel it hedged starting in 2013. Per Bloomberg, the company decreased its fuel hedges as a percentage of total purchases from 40% in the second quarter of 2013 to 19% by the end of that year.

Since then, American Airlines hasn’t hedged at all. With oil prices continuing to drop, this has worked for the company. Its share price is up more than 80% in the past three years.

But things can change. Unrest in the Middle East could throw off the supply-demand dynamics of oil without any notice. That could push oil – and jet-fuel – prices higher… and many airlines could end up paying more than they expect for fuel. This would increase their operating costs and decrease their profit margins.

Of the four companies above, Southwest had the most fuel hedged (43%) at the end of the third quarter. United is 23% hedged. Like American, Delta doesn’t have any hedge contracts in place. That’s because, in 2012, Delta acquired an oil refinery to produce its own jet fuel.

As long as oil prices remain low, most airline stocks will likely continue to do well. And since its stock hasn’t soared as much as the others, American is the most attractive on a short-term basis. But if you’re looking to invest in the sector on a longer-term basis, I recommend looking at Southwest.