I have long thought avoiding stocks that might implode is just as important for portfolio performance as finding attractive equities to put in your portfolio.

A position cratering by 75% or 80% will blow a hole in your portfolio, just ask anyone who heavily weighted internet stocks circa early 2000.

[ad#Google Adsense 336×280-IA]A more recent example is the complete collapse of just about every small and mid-tier energy exploration company as well as about every mining stock over the past 12-18 months.

I put out a 10-page report late in 2014 on which three stocks to avoid in 2015. I was dead wrong on Amazon (AMZN) as investors continue to be willing to forgo anything that looks like earnings or free cash flow for market share gains and revenue increases. As we go to press, the shares go for just over 350 times this year’s likely profits. 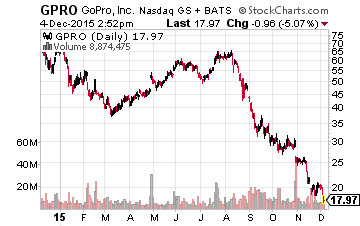 Tesla Motors (TSLA) has mostly been dead money for the year even with several significant gyrations and is almost exactly where it was a year ago.

The last stock I had on that three stock list shows just how devastating a plunge that can happen when a one-time market darling loses its momentum.

That stock was GoPro (GPRO) and you can see from the chart below, holding this equity through 2015 has proven to be immensely painful this year.

My condolences to any who have held on to this niche hardware maker. At least you still have time to sell and take a tax loss by the end of the year to ease some of the pain of holding this stinker in 2015.

I will leave Amazon alone this year as the company has now been successful for over a decade telling investors that profits will be in the future as it continues to make strategic “investments.” Investing in Amazon just does not make sense to fundamental investors such as myself. However, I will continue to refuse to put it in my own portfolio as it does not meet my investment criteria. 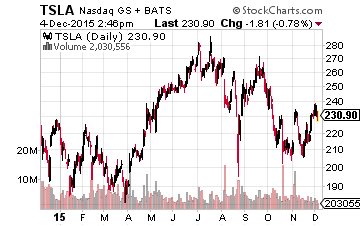 I am keeping Tesla on my stocks to avoid list for 2016 though.

Although they make a fabulous vehicle, the same issues I had last year prompting me to avoid the shares at the start of 2015 are still clipping at its heels.

Tesla should sell some 50,000 vehicles this year but sports a market capitalization north of $30 billion.

To put that valuation in perspective, it is more than half of the market capitalization of Ford (F) that produces millions and millions of cars, trucks, and SUVS annually and also pays an over four percent dividend. On another metric, Tesla sells at eight times trailing revenues. General Motors (GM) sells for 35% of annual revenues.

Tesla Motors has huge expansion plans. However, there is no guarantee the company will find success in the mass market. It will have to spend at least $10 billion over the next five years to ramp up production. The company will also have to build out a supercharger network that is growing but still sparse.

As importantly, it will be next to impossible to maintain the company’s industry-leading margins while moving downscale. Even with those huge margins – twice as much as BMW – the company will lose money this year and for years into the future. Any hiccups on it’s ramp up or a product recall could be devastating to its stock price. 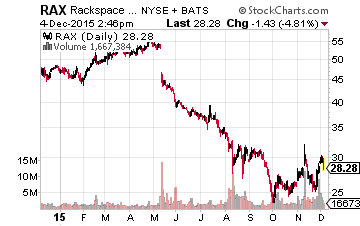 I told my SeekingAlpha followers to avoid Rackspace Holdings (NYSE: RAX) back in September of 2012 (Notation 1).

The stock was trading at $65.00 a share back then and currently exchanges hands at under $30.00 a share.

As I noted at the time the company was likely to be in trouble as Amazon was entering its web services business as a rival.

There is no harder competitor than one that has more scale and has shown to be more than willing to sacrifice margins to grow market share. Predicting that Rackspace was likely to see slowing revenue and earnings growth due to Amazon seemed like a reasonable outcome.

Competition from lower-cost Asian competition was also one of the main factors behind GoPro’s recent troubles.

Even after its recent decline, the shares go for over 30 times this year profits even though both revenue and earnings growth are running at just 10% currently. The problem is its space has become commoditized. It can’t compete on price with Amazon and can’t offer the same level of services on the top end competing against the likes of Microsoft (NASDAQ: MSFT) and IBM Corporation (NYSE: IBM).

I find the stocks listed above having more potential downside than upside at current levels. Avoiding these types of potential landmines that can turn into the next GoPro is one key way to improve portfolio performance for 2016.