But why is that?

[ad#Google Adsense 336×280-IA]We investors take on risk every single time we invest in something. All else equal, less risk is obviously very appealing.

That’s one big reason why I’m always on the hunt for undervalued dividend growth stocks.

I invest my hard-earned cash in high-quality dividend growth stocks – stocks that not only pay dividends, but also routinely and regularly increase their dividend payments.

I dream of living off of passive income like many others – my major financial goal in life is to be in a position where my portfolio generates enough dividend income for me to live off of by the time I’m 40 years old.

But I also want that passive income to increase organically (all by itself) year after year so that my purchasing power at least keeps up with inflation. Even better if it increases faster than inflation!

Stuff gets more expensive over time. So I want to make sure I’m not priced out.

You can find more than 700 dividend growth stocks on David Fish’s Dividend Champions, Contenders, and Challengers list; it’s a compilation of every single US-listed stock that has increased its respective dividend for at least the last five consecutive years.

This goes back to the point about risk.

First, you want to make sure the stock you’re buying makes sense from a quantitative and qualitative standpoints.

And you’ll also want to make sure it makes sense for you as an individual. If a company isn’t in your circle of competence, it should probably be passed up on. I can explain with reasonable accuracy how every single business I’ve invested in makes money and how they’ll likely continue to be able to make money.

After all, that money – that profit – is how those dividends are funded. And we want more dividends, so we also want more profit.

But pinpointing the right investment is just half the battle.

You also want to make sure you get the right price.

See, every stock has a price. You can pull up a stock quote online and get a price right there on any publicly traded stock. Easy.

But what isn’t quite as easy is determining whether or not that’s the right price.

What I mean by that is that price tells you very little. Price just tells you how much something costs.

It doesn’t tell you what something is worth.

Those share prices listed above mean nothing without the context that value provides. How could you possibly know whether or not $40 for ABC is a good deal or not without knowing what the business is actually worth?

A system that’s designed to value stocks can indeed tell you (with some degree of reasonable accuracy) what a stock is worth. This will then tell you whether or not you’re getting the right price. One such system is freely shared here on the site by fellow contributor Dave Van Knapp, and it’s definitely worth a look if this is new to you. Better yet, this system is specifically designed for dividend growth stocks.

In addition to risking less capital when you pay less, you also snag a higher yield.

All else equal, a lower price on a dividend growth stock equates to a higher starting yield. That’s because price and yield are inversely correlated.

Good news for you readers: I recently uncovered a high-quality dividend growth stock that does indeed appear to be undervalued right now.

Ready to check it out?

Designing, manufacturing, distributing, and servicing engines and their components requires a certain specialization and expertise, and this is something that Cummins has honed since the founding of the company almost 100 years ago. Meeting stringent EPA requirements while simultaneously designing complicated engines is a task that has turned off a lot of competitors.

Moreover, this is a business where scale naturally matters. Manufacturing these components is a costly process, so a business has to have the economies of scale in place to make the economics work. With an approximate 39% of the US market for heavy-duty truck engines, Cummins is the largest player in a fragmented market.

Well, it’s clearly working for Cummins: They’ve increased their dividend to shareholders for the past 10 consecutive years.

While that track record isn’t the lengthiest around, the rate at which the company has increased the dividend over that time period is nothing short of excellent: The 10-year dividend growth rate is an astounding 25.1%.

One might expect that to be some kind of fluke from maybe one or two big raises early on, starting from a low payout ratio. But that’s actually not the case here; the most recent dividend increase (announced just a few months ago) was 25%.

That’s almost 300 basis points higher than the five-year average yield for this stock.

Said another way, the current yield is almost three times as high as that which this stock has averaged over the last five years.

It’s just not often you get a yield over 4% with a dividend growth rate so high into the double digits.

But what about the underlying business? The dividend sure tells us a lot, but we need a growing business to support a growing dividend.

We’ll take a look at the last decade insofar as it relates to top-line and bottom-line growth first, which will first tell us a lot about dividend sustainability and growth moving forward. But it’ll also tell us a lot about what this business might be worth, which is what we’re really after here. We want to know the right price to pay.

Surprisingly, the growth has been somewhat secular. This is a very cyclical industry, so that’s why it’s surprising. There was a somewhat large drop in EPS for FY 2009 – that was during the Great Recession – but results bounced back strongly for FY 2010 and beyond.

That somewhat significant excess growth was achieved via a very serious improvement in margins for the company. In addition, the outstanding share count is down by almost 9% over the last decade.

There’s been a definite flattening of that margin expansion over the last few years, however, so one would naturally assume that some of that excess EPS growth moving forward will likely disappear, too. This has been playing out in EPS growth as well, seeing as how EPS is fairly flat from FY 2011.

Fundamentally, the rest of the company is in rather excellent shape.

The balance sheet is fantastic. The long-term debt/equity ratio is 0.21 and the company sports an interest coverage ratio over 38. Furthermore, total cash outstrips long-term debt by a good margin.

Profitability continues the theme. Over the last five years, Cummins has averaged net margin of 9.06% and return on equity of 26.40%. These numbers compare extremely favorably to all competition out there, indicating that Cummins is simply operating at a higher level than pretty much everyone else.

The engine business isn’t for everyone. It’s highly competitive and fragmented, and meeting EPA requirements will continue to be difficult as those requirements change and become more stringent.

But Cummins, in my view, is the best possible way to play the industry. As such, we might expect there to be a big premium on shares.

However, fears over slowing truck sales, tepid global economic growth, and the possibility of more heavy-duty truck OEMs becoming more integrated have led to this stock dropping by more than 36% YTD. I think these risks are very fair considerations, but one has to wonder if they’re being priced in for a firm that should really carry a premium.

What does the valuation look like now? Is there still a premium present?

The stock trades hands for a P/E ratio of 9.83 right now. This is a cyclical industry, but keep in mind the five-year average P/E ratio is 16.2. And as mentioned earlier, the current yield is substantially higher than what it’s averaged over the last five years. Other valuation metrics, like the price-to-book ratio, are also much lower than what they’ve averaged over the last five years.

So there doesn’t appear to be a premium present at all. In fact, shares appear undervalued. But how undervalued?

Seems like we might just have the right price here. But what do some professionals that track this stock think?

There’s a consensus here: This stock is undervalued. I like to average out the three figures so that we get one final number on the valuation. That number is $116.66. That would indicate CMI is potentially 27% undervalued right now. 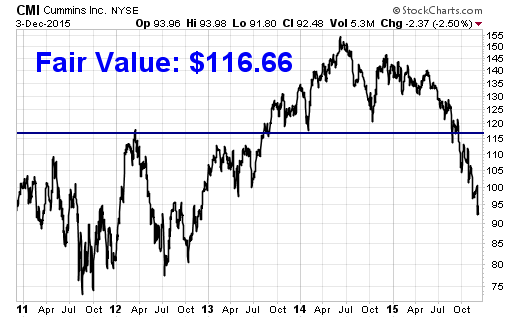 Bottom line: Cummins Inc. (CMI) is the best play on heavy-duty engines, in my opinion. The fundamentals are outstanding, they dominate the market, and the company continues to reward shareholders with growing dividends. The yield is outstanding, relative to the stock’s average as well as competitors. And the stock appears to offer 27% upside right now. If this is an industry that appeals to you, this stock should absolutely be on your radar.