Silver prices fell 92% over that period. But investors who understood how bear markets work could have made a lot of money.

But as I’ll show you, bear markets can still put money in your pocket.

You see, when a commodity is in a bear market, its price doesn’t just go straight down.

It tends to fall in waves or cycles.

Prices will fall, then rise a bit, and then fall again.

Those waves are critical because they offer us great opportunities to make double- or even triple-digit short-term gains… even as the overall price goes down.

The chart below shows silver’s price over the past 35 years. As you can see, silver peaked in 1980, then began to fall. It took 31 years for the metal to complete a full cycle from peak to peak. 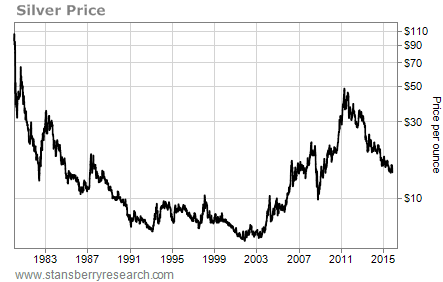 But the price didn’t fall in a straight line. The downtrend was a “series of lower highs and lower lows.” Each rally ended a bit below the previous rally… and each decline took silver a bit lower than the previous low. Take a look… 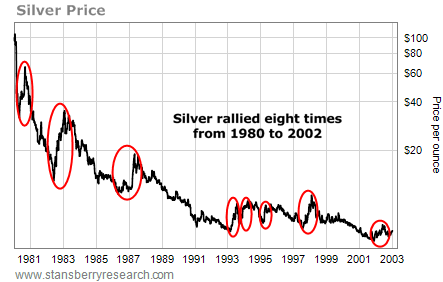 However, a rally is still a rally, even if it’s short-lived. Silver’s short-term price increases are examples of “cyclical bull markets.” They occur within “secular” – or longer-term – bear markets. They’re not powerful enough to break the cycle, but they can help you make money during a downtrend.

You can see what I mean in the table below… It lists the eight cyclical bull markets in silver from 1980 to 2002. They lasted an average of 6.5 months and returned an average of 70%. So, even though prices fell 95% in the big trend, there were eight opportunities to make big gains on the way down.

This is why it pays to pay attention during a bear market.

The last significant cyclical bull market in silver occurred from July 2013 to September 2013, when the silver price rose nearly 30%. That was more than two years ago. Silver could be due for another rally soon, so keep a close eye on it.

If the past is any indication, the gold price could fall 69% from its current level before this bear market ends. And we haven’t seen the price of gold rally more than 15% since 2012. That’s a big difference from the last bear market. Back then, the gold price was enormously volatile.

During gold’s 20-year bear market, there were five cyclical bull markets. The average gain was 42%. The average time between them was four years. The data indicate we’re due for a rally.

That’s why it’s so critical to stay engaged in these markets. Average investors are tuned out. Investor sentiment toward gold has hit its lowest point since 2006. Most investors won’t catch a gold or silver rally until it’s too late. But if you are alert and know how to use stop losses, you can make a solid return from these bear-market rallies.