As consumers, we’re faced with choices every single day.

Buy this or buy that.

Pay this or pay that.

Get this deal. No, this one’s better.

It’s tough to make sense of it all.

However, I’m not just a consumer.

Unfortunately, that means we’re faced with even more choices along that same vein – an investor here in the US has access to literally thousands of stocks, which means thousands of choices.

This is just one of many reasons I’ve decided to focus solely on dividend growth stocks.

A company that can pay a dividend already tells me a lot. It tells me the company is probably profitable, at least profitable enough to hand out checks. It also tells me that management respects shareholders enough to return some of the profit back to them.

There’s a predisposition there. A culture that promotes returning cash to shareholders.

But a company that can routinely increase their dividend for decades is, well, just another beast altogether.

To do that, a company has to do so many things right. You can’t pay and increase a dividend for decades on end while simultaneously lose money and operate at a low level. It just can’t happen. A company has to regularly increase profit and cash flow, responsibly manage debt, run operations at a high level, and generally do the right thing for years and years and years.

So, in my view, sticking to dividend growth stocks filters out a lot of companies that I would never want to invest in. It allows me to stick to the high-quality businesses out there, generally.

Naturally, this limits your choices.

You can see by looking at David Fish’s Dividend Champions, Contenders, and Challengers list that there are less than 800 US-listed stocks that have increased their dividends for at least the last five consecutive years.

Not every company has the culture to pay a dividend. And even less companies have the wherewithal to regularly increase their dividend.

So you’ve just reduced your choices from thousands to hundreds.

But things get even easier when you stick to buying dividend growth stocks that are undervalued at the time of purchase.

The good news is that we can actually use quantitative data to reasonably estimate a stock’s intrinsic fair value – a system that’s designed to crunch some of the numbers and give you some degree of certainty was discussed by fellow contributor Dave Van Knapp.

After all, price is what you pay. But it’s value that you’re actually getting in return. It’s value that tells you whether or not the price you’re paying is a good deal or not.

It’s a huge win-win. Less of your money on the table for more income now and possibly more money later.

It’s easy to see that paying $50 for a stock that’s actually worth $60 or $70 is fantastic. You’re getting a huge discount right off the bat. And instead of putting up $60 or $70 of your money on a per-share basis, you’re only putting up $50 per share. So less money out of your pocket. Less money on the table. Less money (per share) at risk should something go wrong.

But because we’re talking about dividend growth stocks, the benefits go way beyond that.

All else equal, a stock’s yield will always be higher when it’s price is lower. Price and yield are inversely correlated. So as long as a dividend isn’t cut (which would have nothing to do with the stock’s price), the yield will rise when you pay a lower price. That means you’re collecting more income now.

In addition, that additional yield compounds at a higher rate for you when we’re talking about dividend raises. A 7% dividend increase on your stock yielding 3% is absolutely a lot better than a 7% raise should you have only accepted a yield of 2.5% on that same stock. And that compounding effect plays out for the life of your investment, which could just be the rest of your life.

And all of that plays into the potential long-term total return. You have the mispricing on the front end along with the additional yield and additional dividend growth compounding on the back end.

Good news for you readers: I recently discovered a dividend growth stock that appears to be undervalued right now.

Want to know which stock that is?

Archer Daniels Midland Company (ADM) is one of the world’s largest agricultural firms. They process a variety of food commodities including oilseeds, corn, wheat, and cocoa via an integrated business model spread out across six continents. Through their processing, they manufacture products including oils, sweeteners, feed, flour, and ethanol.

This is a stock that’s long been on my watch list, but I just saw the right price.

The stock is now down approximately 30% YTD, due to concerns over food commodities. While Archer Daniels Midland’s recent results have been challenged, this is still a company that produces products that the world quite literally cannot live without.

The company has increased its dividend for 40 consecutive years now.

Just think about that. Think about four decades of harvests, commodities moving up and down, war, weather disasters, major recessions, and everything else that happened over that period that somehow affected this company. Yet that dividend kept on growing.

And it’s not just the length of the streak that’s impressive. The rate at which the company is increasing their dividend is fantastic – the 10-year dividend growth rate stands at 12.3%.

Even better, the most recent dividend increase, announced this past February, was over 16%.

So there’s no slowdown here.

And the company is due for another increase this coming February.

That’s really good news when considering the stock’s yield is near an all-time high of 3.05%.

For perspective, the five-year average yield for this stock is 2.1%, so there’s a favorable spread of almost 100 basis points present right now. And then you’re looking at another dividend increase in just a few months.

However, that’s using TTM earnings per share. While usually a good proxy for the payout ratio against free cash flow, Archer Daniels Midland’s FCF has been weak over the last year. Either way, though, the dividend is covered right now.

You’re basically looking at a combination of an all-time high yield, four straight decades of dividend growth, and a strong likelihood of divided growth well into the single digits in percentage terms (if not low double digits) moving forward. That’s a tough combination to find in the market right now.

Looking at the underlying performance over the last decade, much of the same general theme plays out. Again, the business has been challenged recently. This is a company that is dealing in commodities, and so you’re looking at exposure to dramatic price swings in products and, hence, the company’s profit.

We see some margin compression over this period, which is in large part why there’s the restrained bottom-line growth. Not what I usually like to see. However, that does leave some room for upside there.

S&P Capital IQ believes that Archer Daniels Midland will grow its EPS by a compound annual rate of 6% over the next three years, which would be right in line with what we see over the last decade. However, a recent acquisition of WILD Flavors, a provider of ingredients and flavors, is expected to be EPS accretive for this fiscal year and beyond, so there could be some additional upside. In addition, there’s room for margin expansion.

One aspect of this business that is really reassuring is the balance sheet. Whereas many companies are operating under crushing debt right now, Archer Daniels Midland is not.

Their long-term debt/equity ratio is 0.28 and the interest coverage ratio is over 10.

This means rising interest rates shouldn’t be too much of a headwind for them in terms of servicing their debt. It also puts them in a very flexible position in case there were any short-term issues with cash flow.

Profitability, however, is a weak point for this firm. It’s one of the reasons I’ve long shied away from investing here. Over the last five years, the company’s net margin averaged 1.93% while return on equity averaged 8.20%.

Not all that outstanding in absolute terms, but these are actually really solid relative numbers. It’s just the industry Archer Daniels Midland operates in. Similar to retail in terms of margins.

You’ve got outstanding dividend metrics, first of all. As a dividend growth investor, this is paramount for me.

In addition, you’ve got a great balance sheet. And let’s face it, the world’s not going to stop eating any time soon.

But the profitability metrics aren’t outstanding. And the growth isn’t great. Moreover, we’re talking about a company dealing in commodities, which can be cyclical. And one has to remember that there is exposure to ethanol here, which is suffering in terms of margins right now.

When I see a company that deals in commodities with thin (and thinning) margins, I have to get a great deal on the stock for the investment to make sense.

Is this stock a good deal right now?

Appears quite cheap. But how cheap? What’s a reasonable estimate for intrinsic fair value?

My analysis is pointing to a stock that, after a significant correction in 2015, is cheap. But what do some professional analysts that track this company think about the stock and its valuation right now?

Morningstar rates ADM as a 4-star stock, with a fair value estimate of $49.00.

Looks like I’m siding with S&P Capital IQ on this one. Regardless of the valuation you believe most in, however, the stock appears undervalued right now. I like to average out the three figures so as to smooth out the fluctuations, and that averaged valuation is $42.78. I think that’s a pretty reasonable estimate of intrinsic value. Based on that, we can infer this stock is possibly 17% undervalued. 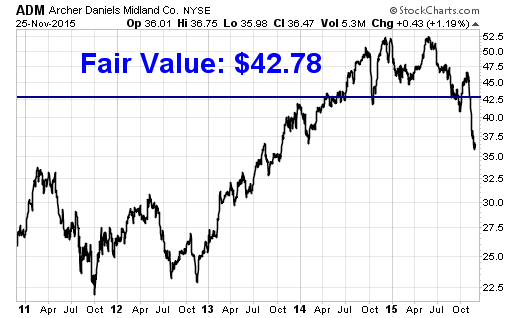 Bottom line: Archer Daniels Midland Company (ADM) is a high-quality processor of agricultural commodities, producing end products that are largely necessary and ubiquitous in our world. After a 30% drop YTD, the stock is in value territory. The yield is near an all-time high, and 40 consecutive years of dividend raises speaks for itself. I recently initiated a position just a few pennies off the 52-week low. I’d strongly look at this stock for its potential 17% upside and long-term dividend growth potential.