It is hard to believe it is already November here in 2015 and the holidays are fast approaching. This is especially true for this ex-New Yorker as it is still 85 degrees down here in sunny Miami – I don’t think I will ever get used to Christmas lights on palm trees.

However, with Christmas coming up fast it is time to think about some stocking stuffers from the market.

[ad#Google Adsense 336×280-IA]These are overlooked and attractive stocks that sell for less than $7.00 or so a share and can fit easily within your portfolio.

Here are a few that are on the top of my shopping list at the moment.

Let’s start with Pernix Therapeutics (NASDAQ: PTX), a small specialty pharmaceutical concern with a market capitalization of approximately $200 million and whose stock goes for just over $3.50 a share currently in the market.

The stock has been caught like most others in the sector by the fallout from the collapse of Valeant Pharmaceuticals (NYSE: VRX) under allegations of drug price “gouging.” 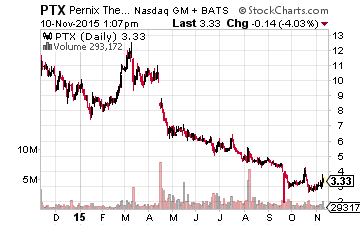 Pernix sold for north of $10.00 a share earlier in the year.

The company also made a significant purchase of an extended abuse-resistant painkiller called Zohydro earlier this year which is taking time to integrate into its portfolio, sales force and get on the “approval” list for HMO’s and PBM’s for 2016.

Pernix is marching towards just better than breakeven earnings in FY2015 after a third quarter that blew both the top and bottom line consensus.

However, now that its sales force has been cross-trained and Zohydro will now be available to some 250 million people domestically in 2016 through these HMOs and PBMs, Pernix is poised for significant growth in the New Year. The consensus has Pernix earning some 60 cents a share in FY2016 on a 30% increase in revenues. At around six times those earnings, the stock is too cheap at current levels. 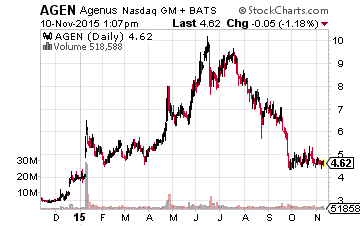 Next up is Agenus (NASDAQ: AGEN) which got caught up in the recent bear market within the biotech sector this summer and has yet to recover.

The company recently sold off its royalty stream from an adjuvant it developed that is going to be used for a variety of vaccines coming to market for some $115 million.

It was a solid strategic move to raise capital to invest in its potentially much more lucrative developmental work around its checkpoint inhibitor technology without having to dilute shareholders.

This technology has drawn the interest of major players within the industry. This includes Merck (NYSE: MRK) and Incyte (NASDAQ: INCY), both of which have paid Agenus significant upfront payments to be collaboration partners using this technology. In addition to these initial payments, Agenus can earn significant milestone payments as compounds advance along their development paths. Of course, the company will also earn nice royalty payments on sales of commercialized products developed within these partnerships.

Agenus traded for above $10.00 before this summer’s huge pullback in the biotech space. The company has plenty of cash on its balance sheet for funding development for the foreseeable future and has a market capitalization of just $400 million.

It also has a couple of knowledgeable and deep-pocketed development partners. I could see the company being a bite-sized acquisition given the interest in its technology and evolving pipeline. The median price target held by the five analysts that cover the firm is $11.00 a share. 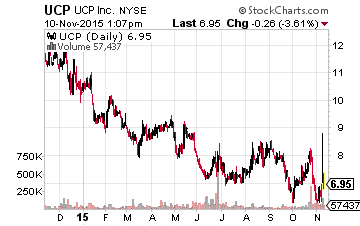 The company gave its long-suffering shareholders some good news for probably the first time in 2015 on Monday when it delivered a blowout earnings report which should bode well heading into the New Year.

UCP reported earnings per share of 20 cents, a huge beat since the consensus was calling for just over breakeven for the quarter.

Revenues were up more than 30% year-over-year to just under $75 million, some $6 million over expectations. Also encouraging was that their order backlog doubled year-over-year to nearly 300 homes. This should mean solid revenue and earnings growth in the coming quarters.

In addition, the company delivered just over 200 homes during the quarter, an increase of over 80% from the same period one year ago. Gross margins went up 460 basis points as selling expenses dropped as it is selling more homes per community. The stock rallied on the news but still sells for approximately $7.00 a share.

I have held onto the stock as its assets are valued for much less than they are worth as the company acquired 70% of its land inventory in the bust years of 2008-2010 and its book value is thus understated. Now that the company is actually posting profits and showing good revenue growth, it could be off to the races in 2016. The three analysts that cover this small homebuilder have price targets ranging from $11.00 a share to $15.00 a share.

I like all of these company’s risk/reward profile from an investment perspective. Just like Christmases when you were a child, sometimes the best gifts you receive are found in your stocking and not under the tree.