Coal has been in a bear market for the past few years. The Market Vectors Coal Fund (KOL) – which holds a basket of coal stocks – has fallen from more than $51 per share in early 2011 to around $8 today. That’s an 84% decline.

And things are unlikely to get better in the near term, thanks to China…

China consumes as much coal as the rest of the world combined.

The country is also the world’s largest coal producer.

So China has a big effect on the coal price. When demand for coal picks up in China, it’s bullish for the coal sector. For example, China had a major economic growth spurt over the past few decades. This growth helped spur a bull market in coal from 2002 to 2011.

But the inverse is also true… If demand for coal decreases in China, it’s bearish for the coal sector. And that’s what’s happening today…

Coal is probably the most hated fuel in the world. It’s dirty and old-fashioned. It’s also responsible for the vast pollution in China. Mostly because of coal-fired power plants, 80% of the Chinese population has been living with pollution levels above what we consider safe in the U.S., according to a 2014-2015 study by Berkeley Earth, an independent group focused on climate science. That same study found that the air quality in Beijing, China’s capital, was like smoking 40 cigarettes a day.

So China has been cutting back on coal use and turning to alternative energy sources, like solar energy and natural gas. According to the U.S. Energy Information Administration (EIA), China’s coal consumption dropped 2% in 2014. And according to Greenpeace/Energydesk China, coal consumption in China fell almost 8% in the first four months this year, compared with the same period in 2014. China plans to continue decreasing its coal usage in the years ahead.

As a result, China’s coal imports are dropping. The difference in China’s imports from the peak in 2013 to the estimated volume in 2015 is about 123 million metric tons. That’s just slightly less than what the fourth-largest importer (South Korea) bought in 2014. 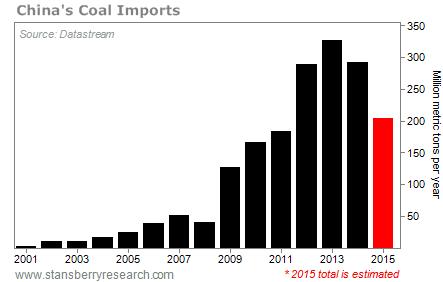 China importing less coal has caused a surplus in the market. You see, when China wants less coal, the ship just goes to a different port. But it’s getting harder to find countries that want coal. As we showed you in July, the U.S. is also using less and less coal. More electricity is now generated using natural gas than coal in the U.S.. South Korea is also decreasing its coal dependence.

This has caused U.S. coal exports to fall 21% in the first eight months of 2015, according to the EIA.

Emerging markets, like India, are increasing their coal consumption as they continue to grow. For example, India’s Ministry of Power plans to use coal as the primary driver of the increase in its power production, according to its most recent five-year plan (for 2012 to 2017). But that hasn’t been enough to use up all the extra supply.

That widening gap between supply and demand has had a huge impact on coal miners. With China’s massive growth over the past 15 years, these miners all expected coal prices to remain high.

Companies like Peabody Energy (BTU), Teck Resources (TCK), Consol Energy (CNX), and Arch Coal (ACI) all expanded coal production from 2005 to 2013. To do that, these miners took on huge amounts of debt.

Now, they have huge piles of debt on the books… but with low coal prices, their revenue and earnings before interest, taxes, depreciation, and amortization (EBITDA) haven’t kept up. You can see this in the table below:

Peabody Energy, Arch Coal, Consol Energy, and Teck Resources have taken on three to six times their debt from 2005.

Today, these companies are making slightly more money (or, in some cases, less money!) than they were in 2005. They are much worse off… and so are their investors.

And things aren’t going to get better anytime soon.

With the largest importer of coal decreasing its consumption, coal prices are likely to stay low for a while. That means coal miners will continue to struggle. I expect most of the companies above to restructure or go bankrupt in the months ahead. I recommend staying away from the sector for now.