The bull market died in September.

The broad-based decline this summer was enough to push the long-term chart of the S&P 500 below its 20-month exponential moving average (EMA).

I use the 20-month EMA as the defining line between bull markets and bear markets.

[ad#Google Adsense 336×280-IA] So when the index closed below the line in September, the bull market died and a bear market was born.

Of course, that didn’t mean investors should have sold all of their stocks and loaded up on a bunch of short sales.

The stock market was severely oversold going into October.

So despite the birth of a new bear market, I warned that stocks were set up for one heck of an oversold bounce.

And, boy, did they bounce.

The S&P 500 rallied 8.3% in October – the best monthly gain in more than four years. The long-term chart of the S&P 500 also climbed back above its 20-month EMA. From a pure technical-analysis point of view, this means the bear market is dead and the bull market has returned.

But is the bull market really back? 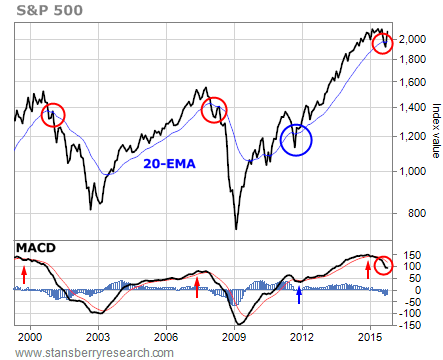 The red circles on the chart show the starts of the bear markets in 2000 and 2007. They both started as the S&P 500 closed below its 20-month EMA and a few months after the moving average convergence divergence (MACD) momentum indicator turned lower from an extended position (the red arrows).

We saw the same sort of move in 2011… the S&P 500 dropped below its 20-month EMA (the blue circle) and the MACD turned lower as well (the blue arrow). But that action was a fake-out. The S&P 500 spent only one month below its 20-month EMA. It quickly reversed and rallied back above the line. At the same time, the MACD indicator turned higher as well. That action reinvigorated the bull market. We’ve had four years of solid gains since then.

With the index back above its 20-month EMA, the current setup looks similar to 2011’s, but with one glaring difference… The MACD indicator has not turned higher.

Despite the huge rally in October, the momentum behind the move is lagging. This “negative divergence” is a warning sign of a pending reversal. It’s something that hasn’t happened before on the monthly chart of the S&P 500 – at least not in the past 15 years. And it’s a reason to stay cautious.

It’s certainly possible that the stock market could surge to new all-time highs from here. November and December tend to be strong months for stocks.

But if the MACD indicator continues to lag, then any further gains in the market are likely to be temporary. It’s also possible that the S&P 500 could dip back down and finish November or December below its 20-month EMA. That action would whipsaw the bulls just as much as last month’s action wiped out the bears.

My point to all of this is simple…

With the S&P 500 trading back above its 20-month EMA, the bulls have the momentum. They also have the strength of the seasonal bullish period between now and the end of the year. But this isn’t a time to go “all in” on the long side. Stocks are now overbought and there’s plenty of risk of a reversal.