Folks continue to be bearish on natural gas…

Last week, I told you the National Oceanic and Atmospheric Administration (NOAA) is predicting a mild winter this year. A warm winter would mean less natural gas consumption.

Now, the U.S. Energy Information Administration (EIA) is saying that household natural gas heating bills will fall by 10% this winter.

[ad#Google Adsense 336×280-IA]Part of the EIA’s forecast is based on NOAA’s winter prediction.

But as I told you last week, I give premium weather service WeatherBELL Analytics’ models more credence.

The meteorologists at WeatherBELL are predicting a major cold and snowy winter over the South and into the East.

And that winter will get a lot worse after December and run late through March.

The other part of the EIA’s forecast is based on the rising volume of natural gas in storage.

As regular readers know, the U.S. is producing a massive amount of oil and natural gas. U.S. natural gas production has grown from 1.8 trillion cubic feet (Tcf) in September 2005 to 2.8 Tcf in March 2015. That’s a 56% increase.

We’re producing so much natural gas that the amount in storage is near its highest level for this time of year since 2006.

And natural gas demand should keep rising. In July, we told you that more electricity is now being generated using natural gas than coal.

Also, natural gas consumption is cyclical. Demand is higher in the winter as consumers and businesses use gas and electricity to stay warm. So the amount of natural gas in storage will decrease as demand for heating goes up. Nearly 50% of all households in the U.S. use natural gas for heat.

Plus, natural gas production has started to fall because of the low price. In July (the most recent data), production was down 2% from its peak in April.

In short, natural gas demand is likely to spike during a colder-than-expected winter, while the amount of gas in storage is likely to decrease. This could easily send prices soaring.

While I doubt we’ll see that kind of move again, it’s not out of the question. Natural gas prices are at their lowest level since 2012. With so many speculators betting against natural gas right now, it could happen. 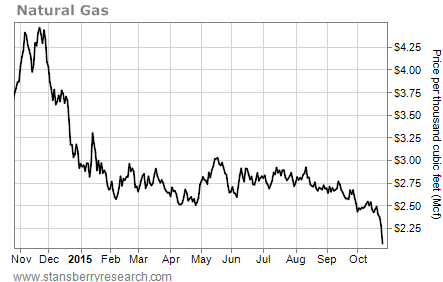 As I said last week, I’m not interested in buying and holding natural gas producers for the long term. But they are a good low-risk, high-reward potential trade right now.

You can look into natural gas producers like Range Resources (RRC) and Cabot Oil and Gas (COG). Buy now, and sell when we hit the peak of winter in February or March.